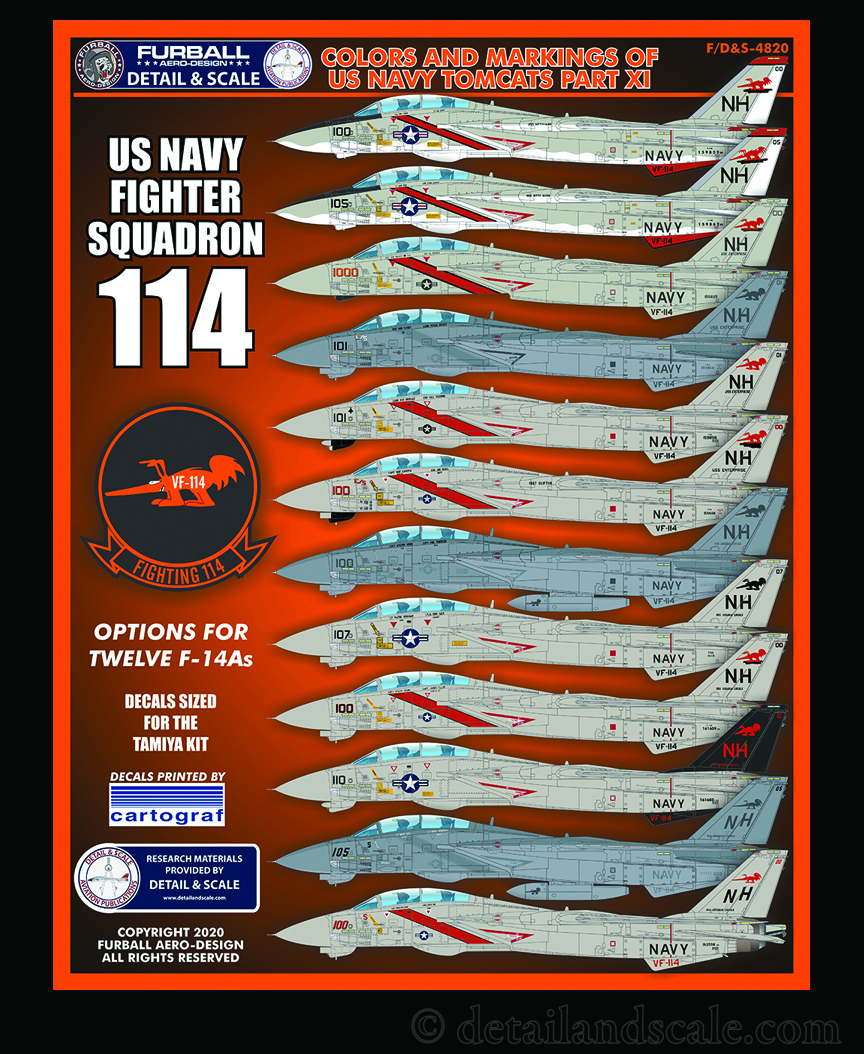 VF-114 “Aardvarks” was a storied F-14 Tomcat squadron.  With its history dating back to 1945, VF-114 flew the F-4B and F-4J Phantom II during the Vietnam war.  In 1963, the squadron’s mascot became “Zott,” which was the sound made by the aardvark in the comic strip, “B.C.”  The connection was made by someone who was inspired by what they saw as the resemblance between the F-4 and the cartoon aardvark.  Fighting 114 transitioned to the F-14 Tomcat in 1975, and the “Aardvarks” flew their jets with distinctive and often colorful paint schemes as they garnered many awards and quite notably tested Ghaddafi’s “Line of Death” in the Gulf of Sidra throughout the 1980s.  Their air wing sailed to join Operation DESERT STORM, but the war ended before they arrived, so VF-114 Tomcats took on the job of ensuring the post-ceasefire peace.  It was to be their last deployment, as the squadron was disestablished in late 1992 as part of the post-Cold War force drawdown.

Here, Furball Aero-Design has released a new installment in their Colors and Markings of US Navy Tomcats decal set series.  Part XI (#F/D&S-4820; MSRP: $25.99) covers the Tomcats of VF-114 from 1976 to their disestablishment in 1992.  The sheet was made possible with research materials provided by Detail & Scale.  It is designed to complement Detail & Scale’s digital and print reference books, Colors and Markings of U.S. Navy F-14 Tomcats, Part 1: Atlantic Fleet Squadrons, and especially Part 2: Pacific Fleet Squadrons where VF-114 is featured.  Part III (Prototype, Test, Evaluation, and Adversary Aircraft) is scheduled for release in February 2022.  These books were written by Bert Kinzey and Rock Roszak with Rock also providing artwork (find out more about these books, including how to order them, HERE).  In the interest of transparency and impartiality, I wish to disclose that your reviewer had nothing to do with the development of this sheet.  Further, I’ve been a Tomcat guy since my childhood on Long Island living right by Grumman – so if I see any errors, I will not hold back.

In this set, there are decals for twelve different F-14As flown across the history of VF-114’s Tomcat years.  Also included are stencil and data decals for one overall Light Gull Gray jet and one jet in a tactical paint scheme:

As is to be expected, these decals are standard Furball – they are of the highest quality decals available today.  They are carefully sized to precisely fit on the Tamiya kit, but most of these can be adapted with little to no effort on the Hasegawa, Academy, Revell, and Hobby Boss F-14A kits.

The outstanding quality of both the decal design and artwork by Furball is matched only by the printing by Cartograf.  They are both superlative.  A high standard of research also shines through on the accuracy of these decals. The choices in schemes are both diverse (CAG, CO, and line jets) including a few subjects that I have never seen on a decal sheet before.  This set contains “classic” late 1970s higher-visibility Light Gull Gray over Insignia White CAG birds, lower-viz overall Light Gull Gray aircraft, a black-tailed CAG jet, their final CAG scheme, and three tactical schemes.  Some unusual or otherwise unique markings can be found among them, such as the jet with a MODEX 1000, the kill marking on the nose of BuNo. 159896, and the famous “Vark of Arabia” on the right side of their CAG jet’s radome in 1991.  Also note that the time period covered by this decal sheet spanned multiple (and sometimes subtle) physical configuration changes on the Tomcat (e.g., presence or absence of the AN/ALQ-67 and -126 antenna fairings, short or tall TACAN antennas, and three different chin pod configuration).  Furball did their research, and each of the airplanes on this sheet is accompanied by accurate airframe configurations in the markings guide.  The stencil set is also outstanding, providing a comprehensive range of both high- and low-viz data for the F-14 from national insignias to NO STEP markings, ejection seat placards, anti-collision lights, low-voltage formation lights, and pretty much everything in between.  Squadron-specific aircrew helmet markings are also included – quite a nice touch.

Furball Aero-Design has done great job assembling another very impressive ensemble of Tomcat schemes that faithfully translated the source material from the Detail & Scale’s Colors and Markings books.  Tomcat fans will be among a broad range of scale modelers who will really enjoy this set.  Long live Zott!