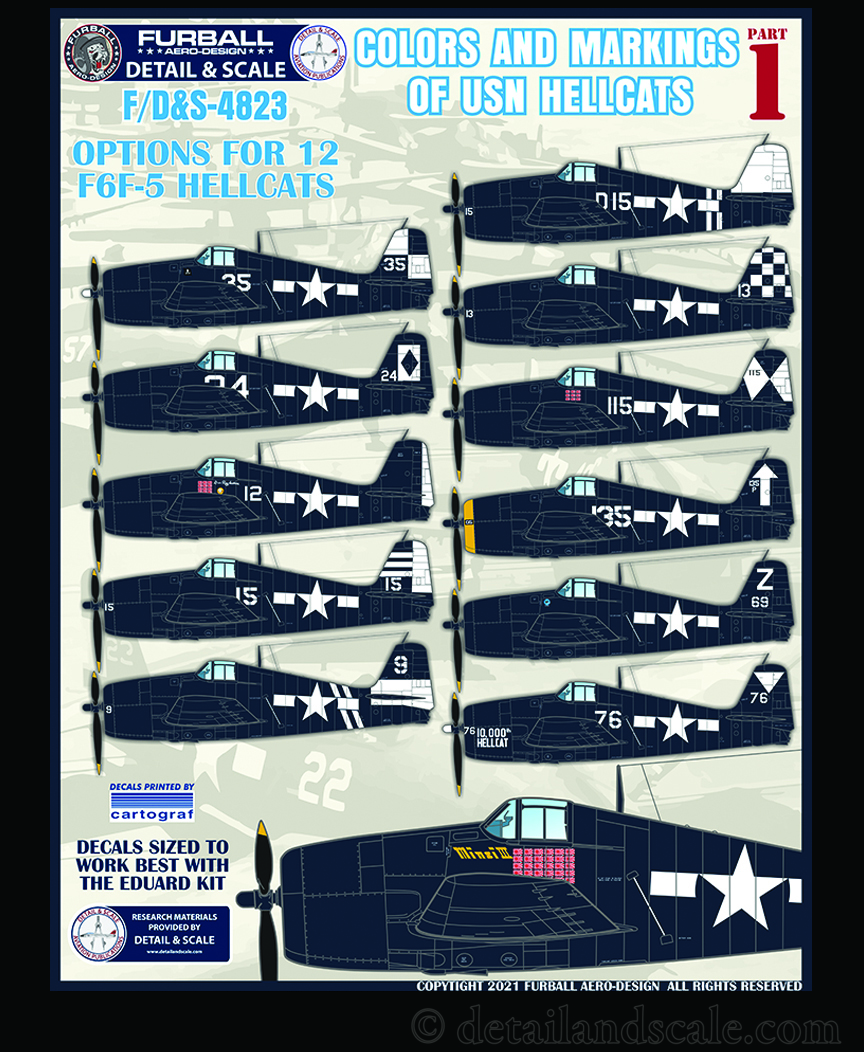 The Grumman F6F Hellcat was one of the great naval fighters of the Second World War. Its design was formed by early war combat experiences against Japan, as well as the strengths and weaknesses of its predecessor, the F4F Wildcat.  Equipped with a rugged airframe, a very powerful engine, heavy armament, and capable high overall performance, the F6F made its combat debut in September 1943.  It generally outperformed the A6M Zero and other Japanese fighters, and it helped secure air superiority over the Pacific.  A total of 12,275 were built and served with the U. S. Navy, U. S. Marine Corps, and Royal Navy Fleet Air Arm.  Hellcats claimed 5,223 kills against enemy aircraft.  The F6F-5 was the definitive production Hellcat, featuring a redesigned engine cowling, a bullet-proof windscreen, refined flight control surfaces, and the 2,200 horsepower Pratt & Whitney R-2800-10W radial engine.

Detail & Scale recently released the book F6F Hellcat in Detail & Scale by Bert Kinzey and Chris Sakal with art by Rock Roszak (you can find out more about this book, including how to order both the print or digital editions, HERE).  Furball Aero-Design followed the book with two sets of decal sheets for scale modelers in both 1:48 and 1:72 scales.  In this review, we examine Colors and Markings of USN Hellcats Part I (#F/D&S-4823; MSRP: $19.99) in 1:48 scale.  This decal set contains markings for twelve F6F-5s during the last two years of World War II.  The sheet was made possible with research materials provided by Detail & Scale related to the content in the book.  In the interest of transparency and impartiality, I wish to disclose that your reviewer had nothing to do with the development of this sheet.

In this set, there are decals for twelve different Gloss Sea Blue F6F-5 Hellcats:

These decals are carefully sized to precisely fit on the Eduard kit, but several of these schemes can be adapted with little or minimal effort to most other F6F kits that are available in this scale.

Furball Aero-Design produces among the highest quality decals available today.  The decal design/artwork by Furball is outstanding, and it is appropriately paired with world-class decal printing by Cartograf.  A high standard of research also shines through on the accuracy of these decals. In other words, Furball translated the source material from Detail & Scale with exemplary accuracy.  The choices in markings capture multiple interesting and varied Hellcat schemes in the 1944-1945 timeframe.  Squadron-specific tail art is all quite eye-catching, such as with tails painted with checkerboard markings, diamonds, arrows, and stripes.  While only very minimalist nose art was tolerated by the U. S. Navy during World War II, a few interesting examples are present on this sheet, such as “Death N’ Destruction” and “10,000thHellcat.”  Aircraft with kill markings include the aircraft of LT(JG) Ray Hawkins of VF-31 and the very famous “Minsi III” from VF-15.  Of note, white decals on a dark background can be infamous in their transparency, but the white colors here have been printed double-extra thick to avoid this problem.   Another real plus from Furball Aero-Design is that very detailed instructions are always provided to show exactly where every decal is to be placed on the model.

Furball Aero-Design has done another great job assembling an impressive ensemble of late-war F6F-5 Hellcat schemes that faithfully draws upon the source material from the Detail & Scale book.  A very broad range of scale modelers will enjoy this decal set.