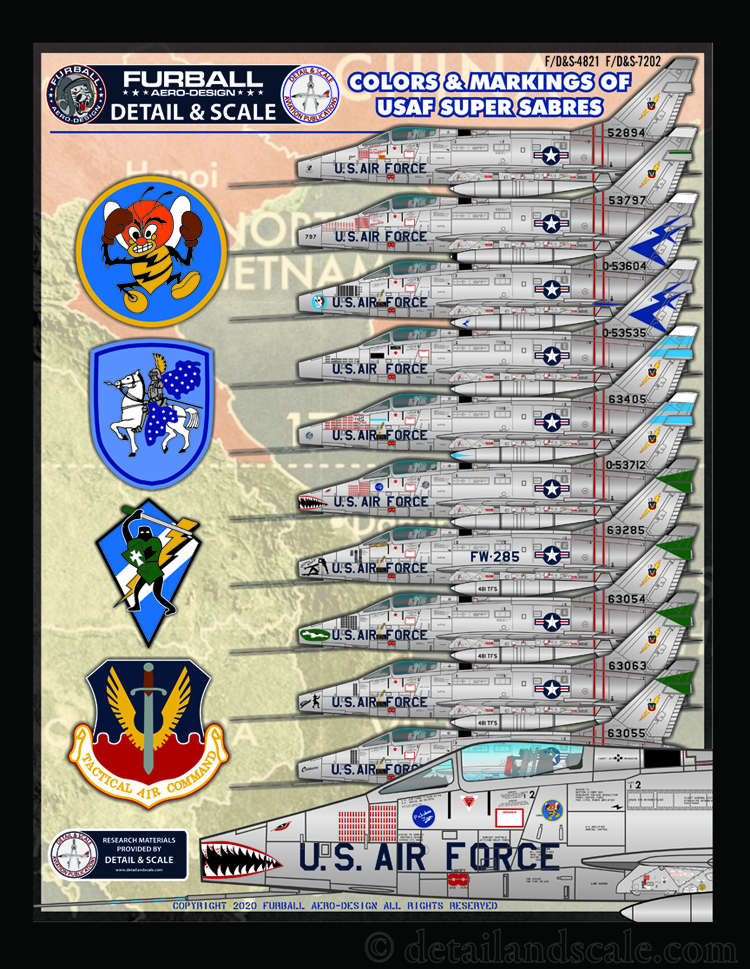 The North American Aviation F-100 Super Sabre was the first of the “Century Series” fighters.  It was something of a bridge linking the legacy of earlier North American fighters (such as the P-51 and F-86) to the later third and fourth generation jet fighters of the 1960s and 1970s.  The F-100 was produced across four major variants, and the F-100D was the first Super Sabre to emphasize the fighter-bomber role as its primary mission.  The F-100D also had a number of substantial upgrades over the earlier F-100A and F-100C, including a larger vertical stabilizer, more advanced avionics, a buddy-refueling capability, and other improvements.  A total of 1,274 F-100Ds were produced.  The F-100D first entered USAF service in 1956.  F-100Ds were also used extensively in the Vietnam conflict until they were withdrawn from front line service in 1972.  Remaining -D models served in ANG units until 1979, while some continued to fly on into the early 1990s as QF-100D target drones.

In 2020, Detail & Scale released its publication F-100 Super Sabre in Detail & Scale (Vol. 11) (and you can find out more about it, including how to order, HERE).  Based on the research materials that went into the book, Furball Aero-Design released a 1:48 scale decal set in early 2021 covering early Vietnam-era F-100Ds from the mid-1960s timeframe (# F/D&S 4821; MSRP: $19.99).  For the purposes of transparency, your reviewer wishes to disclose that he had nothing to do with the development of this sheet, and you will receive an unbiased appraisal.

Furball has a sterling reputation for producing exceptional decal sheets, and this set drives that reputation home.  The high standard of research, decal design, and artwork by Furball is superlative.  This, paired with the printing by Cartograf, produces an exceptional result.  The markings are highly accurate in all respects, all the colors are perfectly toned and in register, the printing is razor-sharp, and the carrier film is thin and very restrained.

There are several 1:48 scale F-100D kits out there, from the older and rather inaccurate Esci kit, to the less problematic Trumpeter kit and the Revell/Monogram kit.  While it is based on 41 year-old molds, the Revell/Monogram kit still reigns as the most accurate 1:48 scale F-100D in the box, but its decal sheets were very poorly done and there were very few stencils.  Each of these kits are the subjects of in-depth reviews in F-100 Super Sabre in Detail & Scale.  The good news here is that for whichever F-100D you have, just about all of these markings can be adapted to any of them without any real effort.

Every single markings option here is interesting and engaging.  Personally, I love the look of the Super Sabre in its silver lacquer base color.  Colorful markings abound in this set, from the TAC Badge and lightning bolt tail flashes to a variety of diverse Vietnam-era nose art.  These include a shark mouth on 55-3712, and nose art such as “Pretty Penny,” “The Shadow,” “Casanova,” a few flying Snoopy characters, and many different (and extensive) mission scoreboards prominently painted on the nose.  The set also includes a very detailed set of complete airframe and pylon stencils for two aircraft on a separate sheet. The stencils are just straight-up gorgeous.  They should not only be a lot of fun to work with, but these stencils will add meaningful interesting and accurate visual detail to your model.

Hats off to Furball Aero-Design for developing such a nice set of markings for a long-neglected subject.  These markings will go far to enhance to the look of your 1:48 scale Super Sabre. This set is also available in 1:72 scale, and we will take a look at that sheet in a future review.  I surely hope that we will see other F-100 markings in this series in the future.