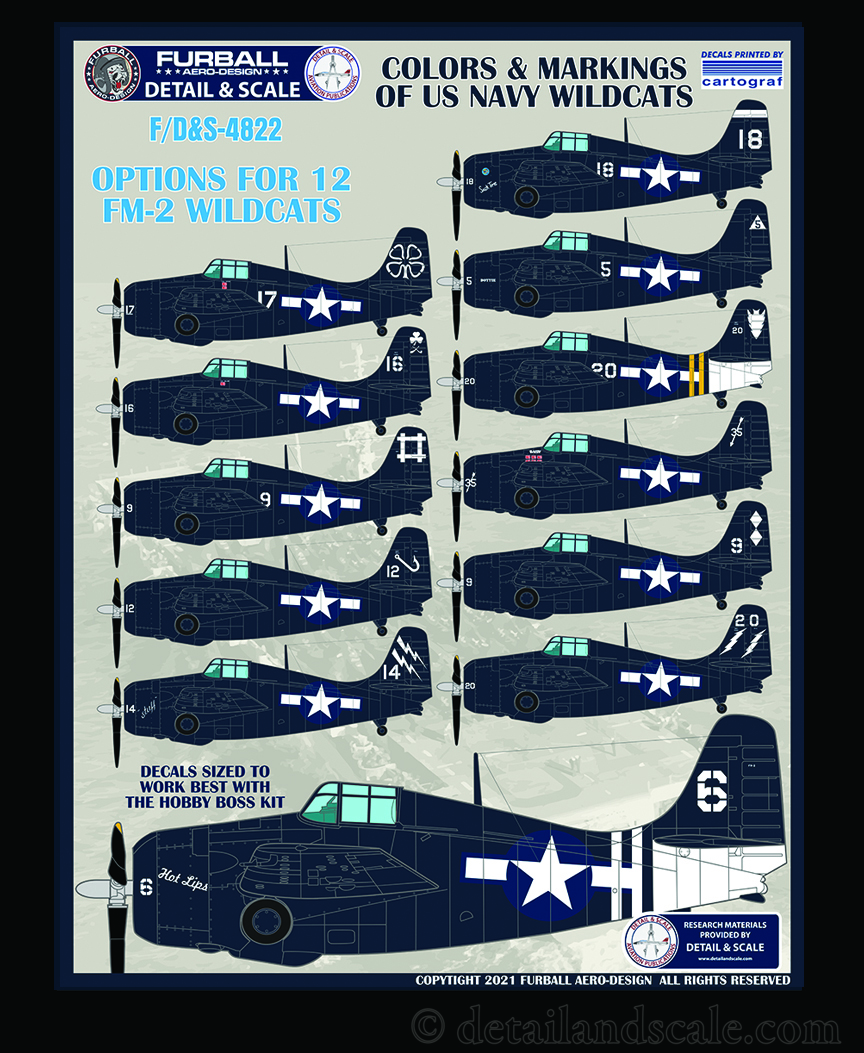 The Grumman F4F Wildcat bridged the era of the biplane fighters of the 1930s and the monoplane fighters that shaped the Second World War.  The F4F was Grumman’s first monoplane, entering service in 1940.  While generally outclassed by the Mitsubishi Zero and soon made obsolete by advances in Allied fighter design, Wildcats nevertheless served effectively throughout the remainder of the war on escort carriers.  Some 7,885 F4Fs were manufactured.  More than 5,000 of that number were built under license by General Motors which took pressure away from Grumman so they could transition to the mass production of the F6F Hellcat in 1943. The definitive Wildcat was the GM-built FM-2 (based on Grumman’s XF4F-8 prototype), and it was optimized for escort carrier operations.  It had a more powerful Wright R-1820-56 engine and a taller tail that offset the additional torque generated by the engine.

Detail & Scale has published the book F4F and FM Wildcat in Detail & Scale by Bert Kinzey with art by Rock Roszak (find out more about this book, including how to order either the printed or eBook editions, HERE).  Furball Aero-Design followed the book with a 1:48 decal sheet, Colors and Markings of USN Wildcats (#F/D&S-4822; MSRP: $25.99).  This set is also available in 1:72 scale as well (F/D&S-7203).  This decal set covers FM-2s during the last two years of World War II.  The sheet was made possible with research materials provided by Detail & Scale and was drawn from content in the book.  In the interest of transparency and impartiality, I wish to disclose that your reviewer had nothing to do with the development of this sheet.

In this set, there are decals for twelve different glossy sea blue FM-2 Wildcats:

These decals are carefully sized to precisely fit on the Hobby Boss kit, but most of these schemes can be adapted with little to no effort to just about any FM-2 kit that is available.

Furball Aero-Design produces the highest quality decals available today.  The outstanding nature of both the decal design/artwork by Furball is matched only by the printing by Cartograf.  They are both superlative.  A high standard of research also shines through on the accuracy of these decals.  Furball did their research and replicated the source material from Detail & Scale with high accuracy.  The choices in markings capture some of the more interesting and varied FM-2 schemes in the 1944-1945 timeframe.  The squadron-specific tail art is all quite distinctive, from shamrocks to fishhooks and lightning bolts.  While only very minimalist nose art was tolerated by the U. S. Navy during World War II, a few interesting examples are present along with a few sets of kill markings that are included here.  Of note, white decals on a dark background can be infamously transparent, but the white colors here have been printed double-extra thick to avoid this problem.

Furball Aero-Design has done a great job assembling an impressive ensemble of late-war FM-2 schemes that faithfully translated the source material from Detail & Scale.  Wildcat fans will be among a broad range of scale modelers who will really enjoy this set.