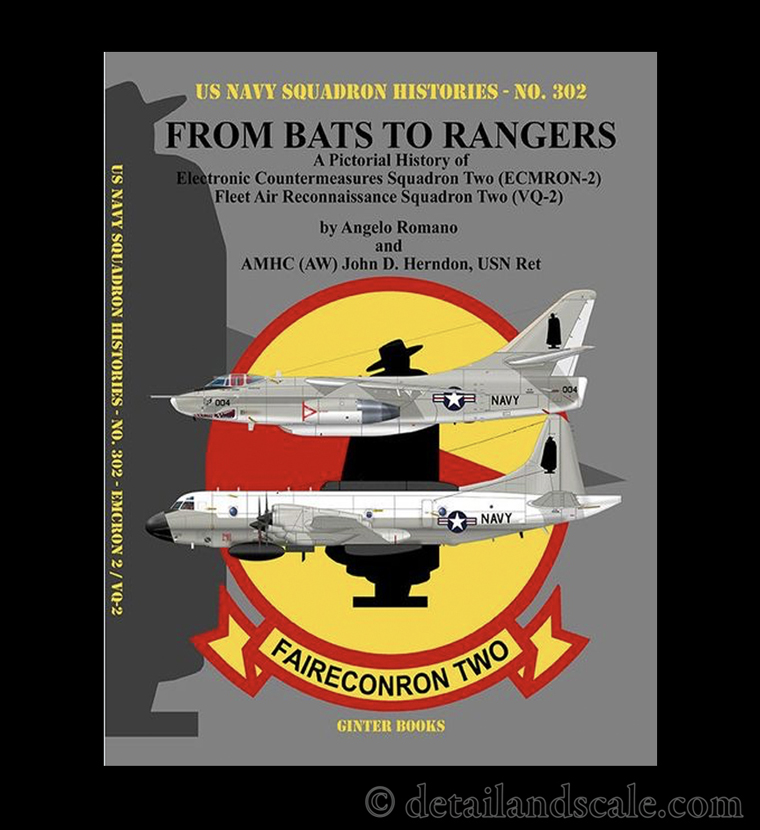 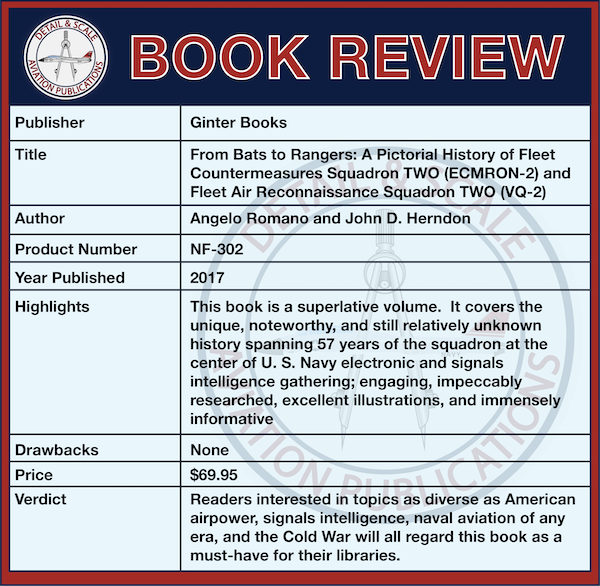 Certain U. S. Navy squadrons seem to get a lot of notice, especially the fighter community.  That attention is nothing but deserved.  Yet, there have been many other less visible or intentionally less prominent operational squadrons whose missions were equally or even more impactful.  In this recent book by Romano and Herndon, the reader is treated to an outstanding treatise on a unique chapter of U. S. naval aviation – the story of ECMRON-2 and VQ-2.  Today partially declassified, their story is one that helped win the Cold War and conflicts into the second decade of the 21st century.

One of the first things that will strike the reader is that this is a substantive book.  It is a big and pretty heavy.  It comes in at 240 pages (all printed on very high-quality paper) with 444 color photos, 180 black and white photos, 37 color profiles, and various unit badges, patches, tables and graphs.  The first author, Angelo Romano, is a widely published and well-known writer on U. S. naval aviation subject matter whose first book came out in 1986.  The second author, John Herndon, was a member of VQ-2 from 1978 to 2000.  He supported both the EA-3B and EP-3A missions, but also was a documentarian of his squadron.

VQ-2’s history begins in WWII and the first efforts by the Navy to develop radio and radar detection and countermeasures equipment.  The book begins with an overview of the CAST MIKE (Counter Measures) Project in 1942 and the deployment of primitive XARD radar receivers aboard aircraft such as the B-17E, PBY Catalina, and PB4Y Privateer.  By the late 1940s, the rise of the Soviet threat helped bring about new electronic countermeasures (ECM) capabilities and technologies.  The Navy stood up VP-HL-6 among a few other units, that flew the increasingly modified Privateers and Martin P4M-1Q Mercators as dedicated ELINT platforms.  Many of the photos and aircraft profiles depict paint schemes and specialized (even exotic) configurations of these aircraft that many readers have never seen.  All of their work was secret, and some these activities were even more covert, such as electronic reconnaissance missions looking for and recording all manner of hostile electronic emissions throughout the Mediterranean and European regions.  Eventually, they became Airborne Early Warning Squadron TWO (VW-2), based at NAS Patuxent River but had its operational detachments elsewhere around the world.

The next section of the book describes the VW-2’s transition to the jet age as its mission became more central to highly sensitive intelligence gathering.  That mission was to conduct electronic search in support of fleet operations and broader national intelligence gathering efforts to obtain adequate and timely intelligence regarding the fine details of enemy radar, communications, and other emissions.  By September 1955, VW-2 became ECMRON TWO (or VQ-2, with the radio callsign Ranger) and their AD3-1Q Skywarriors arrived as the P4M-1Qs had simply aged out.  The squadron logo became that of a stylized bat (a nod to the Mercator) and squadron members were known as Batmen.  P2V-3 Neptune joined their ranks as well.  In 1957 the P2V-5F Neptune came on to support the P4M-1Qs.  The more advanced A3D-2Q (later re-designated as the EA-3B Skywarrior) arrived in 1959 followed by the classic Lockheed WV-2Q/EC-121M Constellation in 1960.  ECMRON TWO was re-designated Fleet Air Reconnaissance Squadron TWO (FAIRECONRON TWO) but still retained the designation VQ-2.  The Lockheed EP-3E ARIES arrived in 1971 and the squadron continued to fly the EP-3E until its disestablishment in 2012.  Other aircraft operated by VQ-2 included the UA-3B, UP-3A, TA-3B, and P-3A.  This was a diverse composite outfit.  The lineage of internal and external changes involving ELINT gear and other one-of-a-kind modifications are systematically presented in the text and illustrations throughout the description of these aircraft.  It’s eye-opening.

For much of this history, VQ-2 practiced multiple forms of operational deception including by omitting operational markings on their airplanes (lacking even tail codes) until 1971 when the iconic silhouette of a mysterious-looking cloaked Spaniard, the Sandeman, appeared on their tails.  Better known as “The Don,” the image was somewhat controversially co-opted from the logo of a famous brand of Spanish wine.  Other examples of rare nose art, “zapped” Skywarriors while on carrier DETs, and a great shark mouth scheme on the EA-3B before its 1991 retirement are all covered.  Also described is VQ-2’s 1979 transition leaving the Sandeman behind and adoption of the “Cosmic Bat” that became the squadron logo until The Don’s return to squadron tail art in 1988.

Of course, throughout all of this, the authors’ primary written and visual narrative is about VQ-2’s diverse deeds and missions as the Navy’s highly specialized electronic eyes and ears.  From their base in Rota, Spain, VQ-2 participated extensively in virtually all the major actions of the Cold War and beyond.  Their EA-3Bs frequently went aboard carriers as detachments.  The book tells the story in text in pictures as to how the squadron was there during nearly every conflict event of the Cold War – listening and doing other “stuff and things” that occasionally even included intercepts of hostile aircraft.  As described in the book, VQ-2’s broader history included engagements in Vietnam, the 1982 Lebanon War and Beirut Crisis, multiple anti-terrorism operations including supporting the resolution of the Achille Lauro incident, and Operations EL DORADO CANYON, DESERT SHIELD/DESERT STORM, DENY FLIGHT, PROVIDE COMFORT, DELIBERATE GUARD, SILVER WAKE, and ENDURING FREEDOM among many others.  When VQ-2 stood down in 2012, they had been operating for no less than 57 years.  Indeed, as stated by the slogan painted on the front of the administration office of VQ-2 at NAVSTA Rota, “Eternal Vigilance is the Price of Freedom.”

Overall, this book is outstanding.  It’s hard to start picking which set of accolades to begin with.  Romano and Herndon’s text is very well written and clear.  The choices of photos are all excellent and highly informative.  There are also numerous gorgeous color profiles of many different aircraft as well.  The authors’ remarkable depth of research and knowledge on the subject matter is plainly evident, and I learned a lot on virtually every page.  The book is simply immersive.  There is a great deal of rich, new information for readers here.  From a design and production perspective, the book’s printing, binding, and other attributes are all top-notch.

There is nothing worthy of any substantive critique in this work.  That’s a real tip- of-the-(Sandeman’s) hat.  Writers love to nitpick (hopefully, in a constructive manner) the work of other writers, but I’ve got nothing besides one misspelling (Operation NEW DAWN was misspelled in one place as NEW DOWN).

Angelo Romano and John Herndon’s From Bats to Rangers: A Pictorial History of Fleet Countermeasures Squadron Two (ECMRON-2) and Fleet Air Reconnaissance Squadron Two (VQ-2) is exceptional.  It gets a very high bravo-zulu rating, cover-to-cover.  Many readers will find that it is hard to put down once you open it.  It is as immersive as it is impressive.  Readers interested in topics as diverse as American airpower, SIGINT, ELINT, naval aviation of any era, and the Cold War will all find a great deal of valuable and new information here.  This book will likely find a central place on many people’s bookshelves.

We are sincerely grateful to Angelo Romano and Ginter Books for the review sample.  You can order this book from Ginter Books directly at http://www.ginterbooks.com.  In the book reviews section at detailandscale.com, you can read our reviews of Romano’s even more recent two-volume Electronic Aggressors here