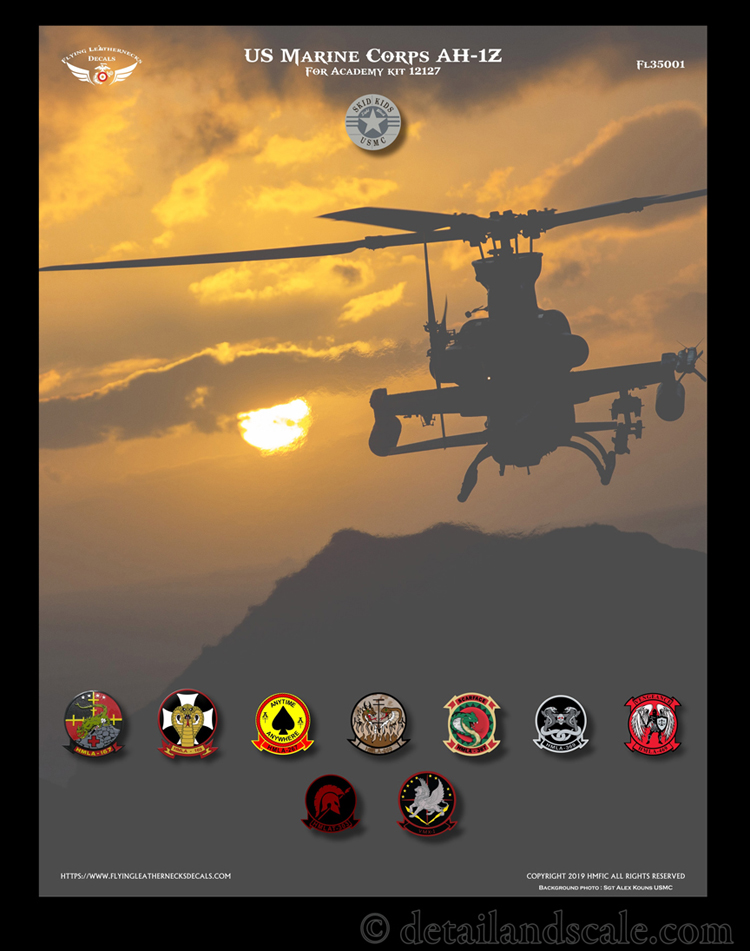 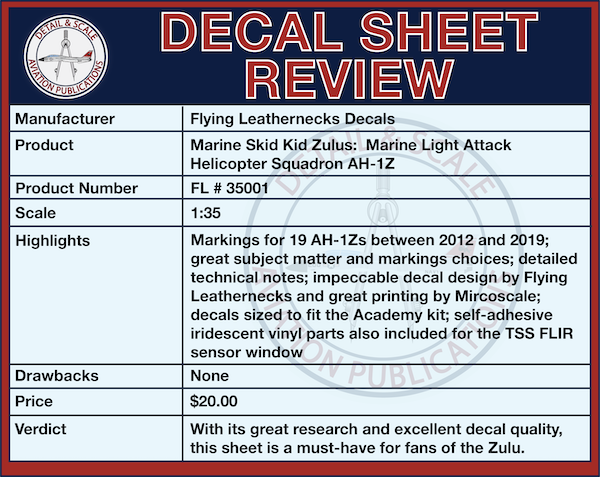 The United States Marine Corps has a lot of exceptional air assets, and in the rotary-wing inventory, the AH-1Z stands out.  In 1996, the DoD signed a contract with Bell Helicopter to upgrade the venerable AH-1Ws into AH-1Zs.  The aim was to provide modernized and even more lethal AH-1s for the USMC.  The -Z variant incorporates new rotor technology with upgraded avionics, new cockpit displays and weapons systems, new electro-optical sensors, stand-off precision attack capabilities, and enhanced survivability.  The first AH-1Z first flew on 8 December 2000 and in 2010, it was declared combat-capable.  In addition to rebuilds, the fleet of 189 AH-1Zs includes more than 50 new-build airframes.  Crews are equipped with the “Top Owl” helmet-mounted sight and display system.  One of the many benefits of the helmet is that it integrates directly with the Target Sight System (TSS) and its third generation FLIR.

In this recent release, Flying Leathernecks decals has produced their first-ever sheet in 1:35 scale and provides markings for the 1:35 Academy kit of this rather fearsome attack helicopter.  Markings are provided for no less than 19 Zulus:

The decals were designed by Flying Leatherneck Decals and printed in the USA by Microscale.  The design quality of the artwork is stunning.  This may be the best sheet Flying Leathernecks has done to date in this respect.  It on par with manufacturers such as Furball, Afterburner, or Fightertown.  The work here is OUTSTANDING.  Print quality is equally exemplary and carrier film is precisely applied right at the very edges of each marking.  They really appear on par with Cartograf and the carrier film appears perfectly thin.

The markings guide is filled with technical and painting notes where appropriate.  There’s also another section of modeling notes (including correcting the erroneous color callouts in the kit instructions) and recommended aftermarket detail sets for the 1:35 scale Zulu.  There’s a complete set of airframe stencils that extend to the markings for the LAU-7 missile rails, LAU-68 and LAU-61 rocket pods, and full AN/ALE-47 Chaff/Flare buckets.  A lot of these details are subtle, but they are well represented here.  There’s also a set of self-adhesive pre-cut “holographic-style” applique iridescent vinyl stickers for the TSS FLIR window.  Overall, not many decal manufacturers are so thorough, thoughtful, or complete.

In sum, Flying Leathernecks has yet another high-quality hit on their hands.  The depth of research and sterling production quality really shine through.  Marine Skid Kid Zulus is excellent in all regards and will be especially valuable for AH-1Z fans, folks interested in USMC subject matter and modern combat aircraft more broadly.  Many thanks to Dave Beltran-Roof of Flying Leatherneck Decals for the review sample.  You can find them on the web at https://www.flyingleathernecksdecals.com and on Facebook at https://www.facebook.com/Flying-Leathernecks-Decals-137660979588449.  The sheet can be ordered straight from their website, Sprue Brothers, or from Flying Leathernecks on eBay.