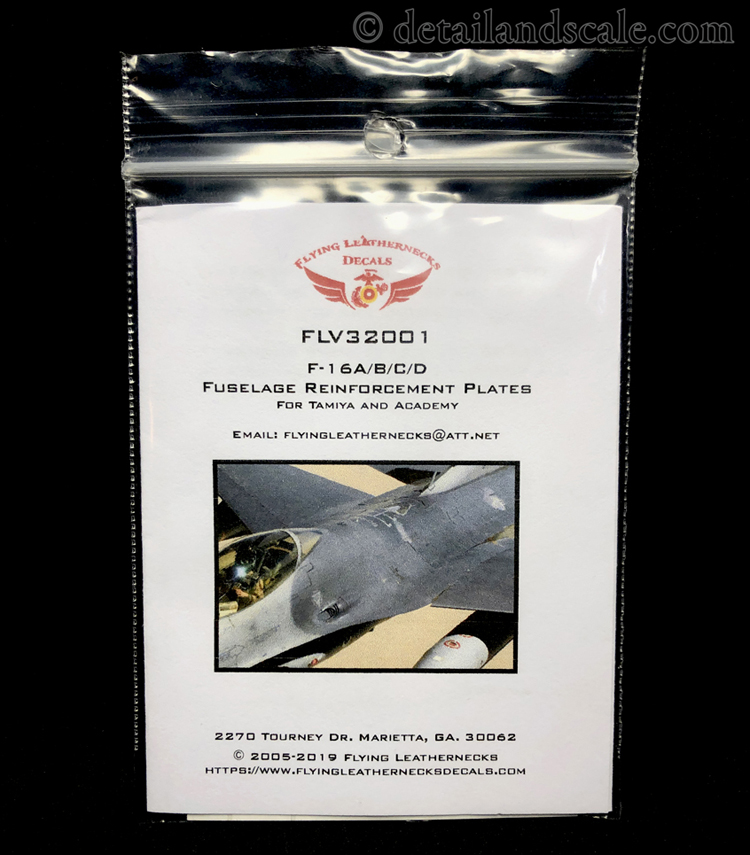 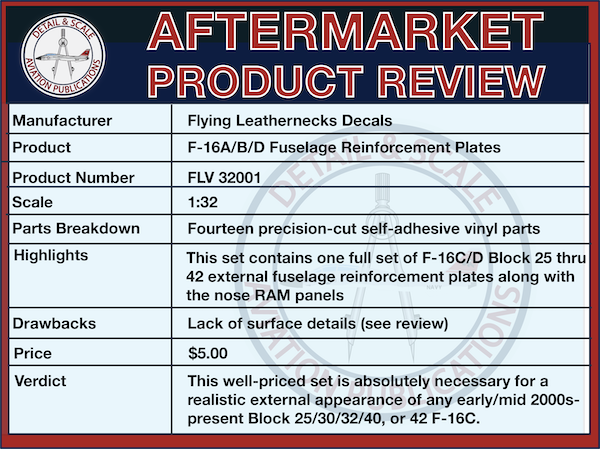 Flying Leathernecks Decals is one of our favorite aftermarket decal manufacturers, but they also produce a number of other products including vinyl applique parts.  Here, we take a look at their 1:32 scale F-16 Fuselage Reinforcement Plates set.

Over its long and still-continuing service lifetime, the F-16 has been known to develop a few cracks here and there as airframe hours started to climb.  As a response, external reinforcement plates (a.k.a. “scab plates” or “beef-up” plates) were riveted into the exterior upper fuselages and aft wing roots of Block 25 thru Block 42 aircraft.  Higher blocks were reinforced as well, but those involved production changes internal to the airframe.  If you’re building any kit manufacturer’s 1:32 scale F-16C anywhere between these common block numbers, you really do have to add the plates for a realistic external appearance.

This set contains a precision-cut self-adhesive vinyl set for one full set of F-16C fuselage reinforcement plates.  What’s important to note is that there are different patterns of fuselage reinforcement plates between the Block 25/30/32 and Block 40/42 configurations.  This set contains them all.  The instructions note that there are differences in plate placement but do not delineate block difference.  For that, we would direct you to the excellent series of F-16 reference books by Jake Melampy at Reid Air Publications.  The set also includes the very distinctive RAM panel added to these jets in front of the RWR receiver on the left and right sides of the nose (forward left and right avionics bay doors, just aft of the radome).

Overall, this is a great set, and it’s absolutely necessary for a realistic external appearance of any early/mid 2000s-present Block 25 thru 42 F-16C.  The only drawback is the lack of surface rivet details here, especially on the wing root plates.  They all have a lot of surface details.  So, apply your parts, paint them, and add the rivet detail with a pounce wheel or a lead or graphite pencil.

Many thanks to Dave Beltran-Roof of Flying Leatherneck Decals for the review sample.  You can find them on the web at https://www.flyingleathernecksdecals.com and on Facebook at https://www.facebook.com/Flying-Leathernecks-Decals-137660979588449.  The sheet can be ordered straight from their website or at Sprue Brothers (http://spruebrothers.com).