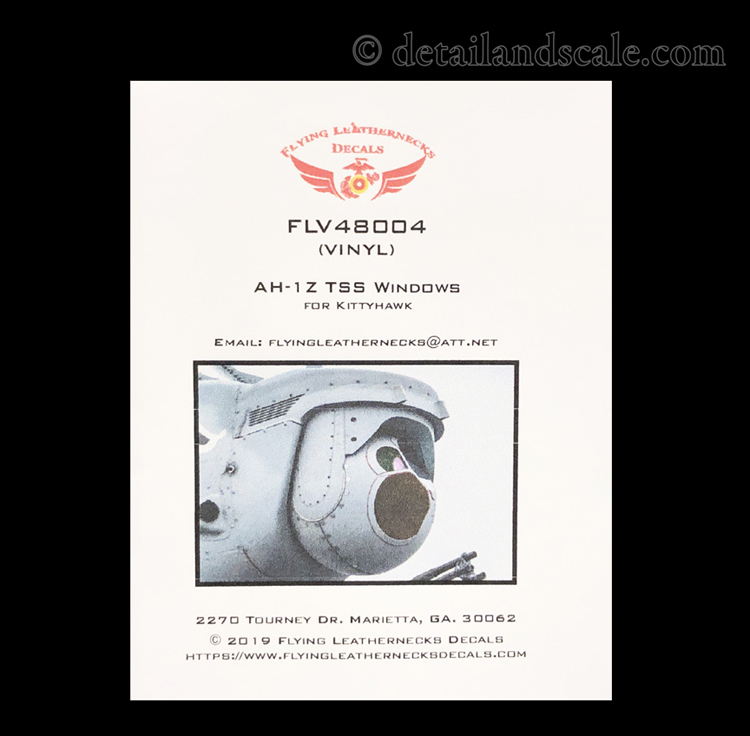 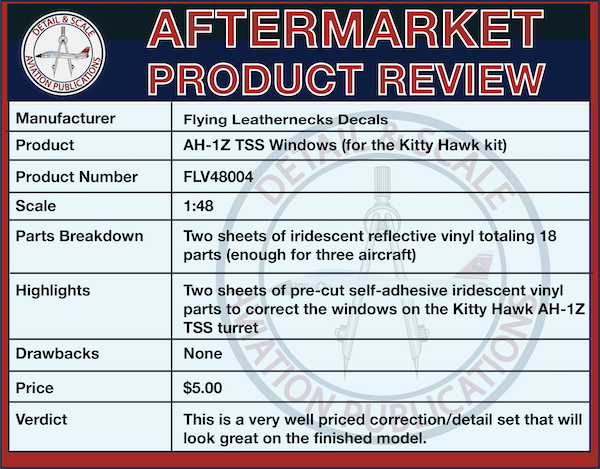 The United States Marine Corps has a lot of exceptional air assets.  The AH-1Z certainly stands out.  In 1996, the DoD signed a contract with Bell Helicopter to upgrade the venerable AH-1Ws into AH-1Zs.  The -Z variant incorporates new rotor technology with upgraded avionics, new cockpit displays and weapons systems, new electro-optical sensors, stand-off precision attack capabilities, and enhanced survivability.  It also utilizes the “Top Owl” helmet-mounted sight and display system.  One of the many benefits of the helmet is that it integrates directly with the Target Sight System (TSS) and its third generation FLIR.

In this set, Flying Leathernecks Decals provides a set of pre-cut self-adhesive reflective vinyl stickers for the 1:48 scale Kitty Hawk AH-17Z kit’s TSS turret.  The nose mounted turret has three separate windows and the glass on the real thing is rather iridescent.  Kitty Hawk appears to have goofed up their window configuration, so Flying Leathernecks suggests you sand flat the windows on the kit TSS turret and then apply these parts.  Here, you get self-adhesive pre-cut “holographic-style” applique iridescent vinyl stickers.  This set has two separate sheets – one for the red-ish large window and the other takes care of the blue-ish hue of the other smaller windows.

Overall, the set looks great.  It is very well priced, actually functions as a correction set, and will save scale modeler’s a ton of time and effort.  These will look really slick on the finished model, too.