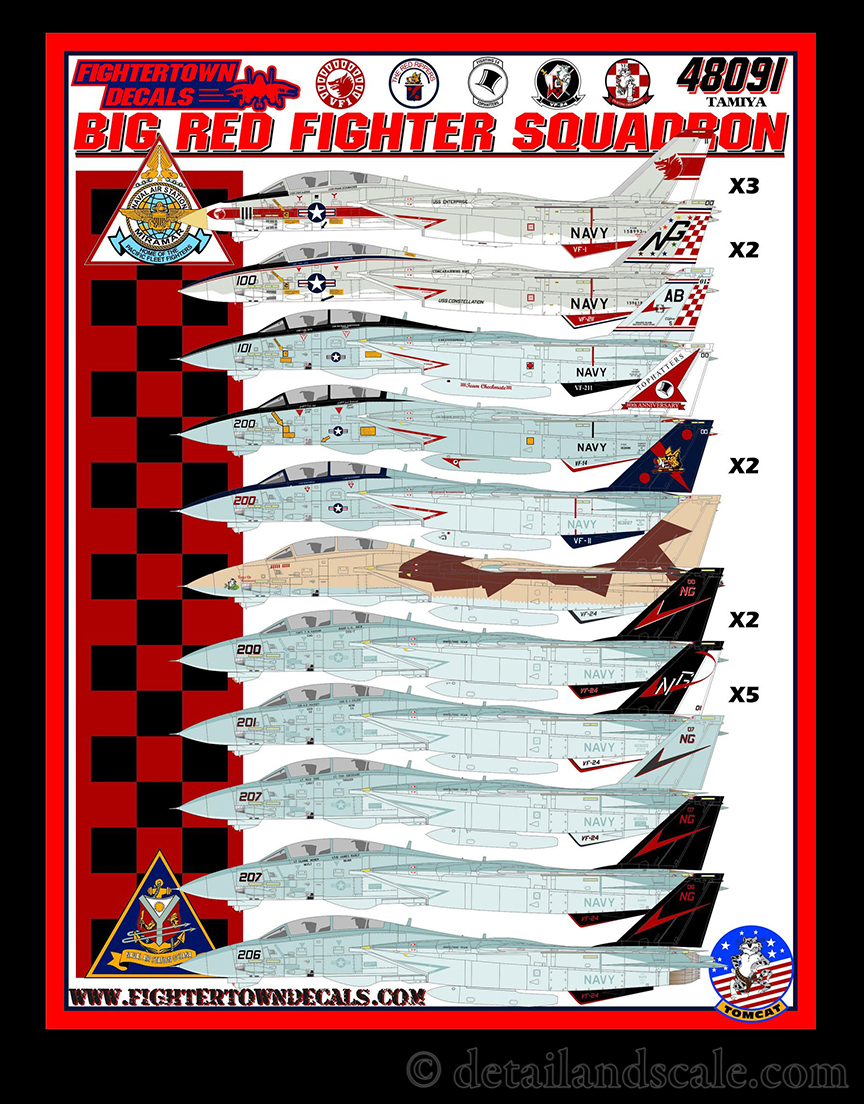 The Grumman F-14 Tomcat carried many colorful, memorable, and historic paint schemes over its long service career.  Some of the most notable markings invariably involved a lot of red paint, from VF-1 to VF-211.  This recent release by Fightertown Decals provides decals for no less than twenty 1:48 scale F-14A and F-14B Tomcats from 1974 to 2005. Let’s take look!

In this set, markings come on two decal sheets for the following Tomcats:

Fightertown Decals is widely regarded as among the highest tier of elite decal set producers.  One component of this reputation stems from the decal design and artwork by Fightertown.  The detail is outstanding, and the accuracy of the art cannot be improved upon.  This fact reflects the depth of painstaking research done at Fightertown, which is then translated with equal fidelity to the decal rendering itself (and that is no small task).  Another component relates to the fact that Fightertown teams with Cartograf in Italy to produce the decal sheets.  No one prints higher-quality waterslide decals that Cartograf. Their rich colors, ultra-fine printing resolution, and use of thin and restrained carrier film are the best in the business.

This 1:48 scale set comes on two sheets, and it contains some of the most iconic Tomcat schemes ever seen.  The markings are sized to fit precisely on the Tamiya kit, but a number of the items here can be adapted with a little care and effort to most 1:48 scale Tomcat kits.  It starts out with five schemes from the early days of the Tomcat, with three “Wolfpack” and two “Checkmates” in Light Gull Gray-over-White colors.  The “Checkmates” schemes capture their original high-visibility markings before and during their first deployment beginning in 1975.  There’s also a nod to Tamiya’s original 1:32 scale F-14A kit in the decals provided for Nickel 100.  A third VF-211 scheme covers the very end of the F-14A’s fleet service with the final cruise of the “Checkmates” as a Tomcat squadron in 2003-4.

Another really eye-catching jet is found in VF-14’s 80th Anniversary scheme with the white and red vertical stabilizers.  The “Red Rippers” of VF-11 naturally had to make an appearance here as well and includes two variations of their final black-tailed F-14B CAG bird that coincided with the final deployment of the Phoenix missile in 2004 (note the “Thanks for the Ride!” Phoenix missile nose art).  VF-11’s red-brown and tan-over-gray “Thief of Baghdad” desert splinter scheme is a real treat here, especially as your reviewer really likes the unusual stuff.  This was a temporary water-based paint scheme applied to one “Ripper” jet during a DET to Fallon in 1990 when the Tomcat community was just beginning to experiment with dropping iron bombs.  The other ten schemes in this decal set correspond to CAG and line jets in the 1995-1996 timeframe from VF-24 “Renegades.”  The markings cover their “Last Rage,” or final carrier deployment, disestablishment ceremony, and markings following the formal end of VF-24 over about one month’s time.

The attention to detail on this sheet is outstanding.  The most subtle of variations in markings differences and their evolution before, during, and after a cruise are accounted for.  Very detailed and thoughtful construction and external stores configuration notes in the markings guide accompany each scheme as well.  In all cases, Fightertown accurately defines for the scale modeler the various and often subtle airframe configuration differences (from gun gas vent grills to wheel hubs and ECM fairings), and what parts to get in order to conduct any modifications of the Tamiya kit, such as with backdating the jet to Block 65 or 70 configuration when working with the VF-1 schemes from 1974-5.  Very well detailed notes on cockpit configurations and specific weapons loadouts are also quite notable, and included observations such as the laser-guided bombs carried by VF-14 during Operation ALLIED FORCE, VF-11’s loadouts during the Battle of Falluja, and so forth.  Decals are even provided for VF-24 intake covers, various flight helmet markings, and a set of “Renegades” squadron baseball caps.

Fightertown Decals has hit yet another home run with Big Red Fighter Squadron.  This is a very impressive decal sheet set that assembles a unique ensemble of F-14 schemes seen over a 31-year period.  I should also note that scale modelers will find an ideal pairing of these decals with reference materials in Detail and Scale’s digital and print reference books, Colors and Markings of U.S. Navy F-14 Tomcats, Part 1: Atlantic Fleet Squadrons, and especially Part 2: Pacific Fleet Squadrons.  Part III (Prototype, Test, Evaluation, and Adversary Aircraft) was just released as of this writing.  These books were written by Bert Kinzey and Rock Roszak with Rock also providing the artwork. You can find out more about these books, including how to order them, HERE.

A very broad range of scale modelers will enjoy this decal sheet set, from F-14 geeks and fans of scale naval aviation to the even broader general audience of scale model airplane builders.  Big Red Fighter Squadron gets resounding bravo-zulu from us.

Many thanks to Brian Plescia at Fightertown Decals for the review sample.  You can find them on the web, order this sheet, and see their other decal sheet sets at http://www.fightertowndecals.com