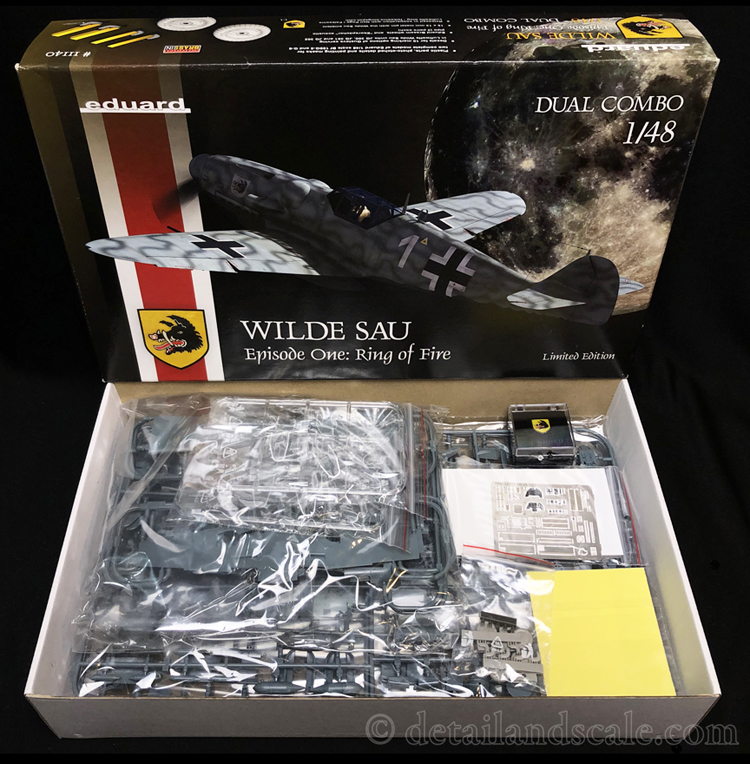 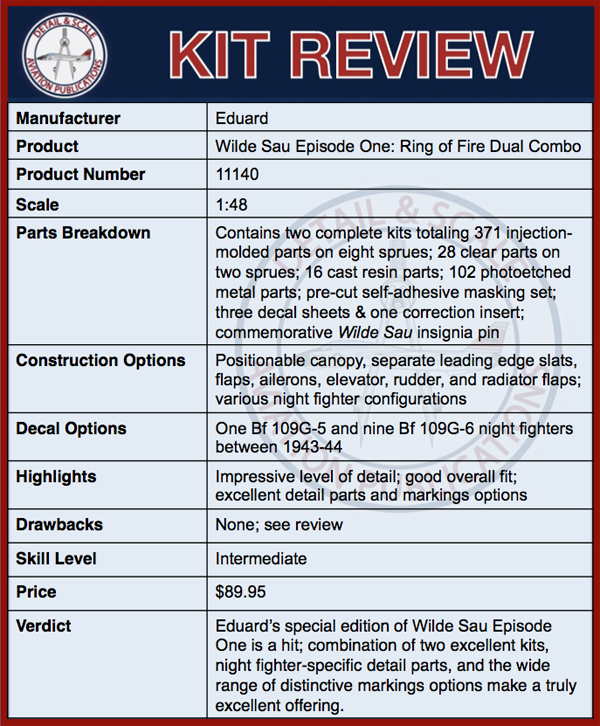 By 1942, RAF Bomber Command had mounted massive and deadly nighttime raids against German cities.  The sheer size of the bombing raids and their use of chaff overwhelmed German anti-aircraft defenses.  In response, Luftwaffe night fighter defenses had to evolve in an attempt to counter the British attacks.  In this setting, the Bf 109’s desperate “Wilde Sau” mission was launched.  In this review, we sit down with Eduard’s recent Wilde Sau Episode One: Ring of Fire Dual Combo Set that contains two complete Bf 109G-5/6 kits, resin and photoetched metal detail parts, and several other notable features.

The Bf 109 needs little introduction as one of the two premier single-seat, propeller-driven German fighters of the Second World War.  The prototype flew in 1935 and marked the start of a production run of 33,984 airframes spanning dozens of variants and subtypes.  It was a highly advanced fighter for the mid-1930s, and as a testament to the aircraft, Bf 109s were still deadly opponents ten years later as jet fighters came onto the scene.

The Bf 109G, or the Gustav, was an evolutionary development of the Bf 109F-series.  Externally, 109Gs started off as nearly identical to the earlier -F model.  Internally, the wings were reinforced, the windscreen was bulletproofed, and the fuel tanks surrounded by light armor.  The outer wheel bay shape was changed, and air inlet scoops were added on both sides of the forward engine cowling that held the new Daimler-Benz DB 605A engine.  In early 1943, the G-6 emerged and had the previously standard 7.92mm MG 17 machine guns replaced by 13mm MG 131s.  Due to the MG 131’s larger breechblock, bulged gun covers were fitted to the cowling, leading to the Bf 109G-6’s nickname, Die Beule (The Bulge). More than 12,000 G-6s were manufactured into 1944.  Many flew on to the final days of the war.   The Bf 109G-5 was identical to the G-6, but it had a pressurized cockpit. A total of 475 Bf 109G-5s were built between May 1943 and August 1944.

While the popular imagination of German night fighters often centers on twin-engine, radar-equipped Bf 110s, He 219s, and Ju-88s, single engine fighters were among the first to enter the fray.  In the wake of the exceptionally destructive, deadly, and large-scale RAF night bombing raids of early 1943, Luftwaffe Major Hajo Herrmann advocated for the use the Bf 109G-5/6 day fighter to go after the bombers in coordination with ground control radars and searchlight crews. Outside of night camouflage schemes, the original aircraft received minimal modifications for night fighting.  Soon, flame dampeners were added over the exhaust stacks and major changes to external lighting were made.  A few extra instruments were added to the cockpit to aid in night flying, including a display that tracked a homing signal to their home airfield.  Special equipment included the FuG 16 ZY navigational radio set and FuG 25a IFF radio.  A major threat was their own ground fire.  These aircraft were thus fitted with Pfeife, or whistles, to the exhausts.  Flak batteries on the ground thus were provided an audible warning that their night fighters were in the area.  Flare drops and even aircraft-mounted infrared lights were also used provisionally to signal “don’t shoot.”  Use of drop tanks helped increase the endurance of these Bf 109s.  In their anti-bomber role, most aircraft were fitted with two heavy hitting, underwing 20mm MG 151 cannon pods in addition to the two MG 131 machine guns in the nose.

Major Herrmann’s tactics, when put into practice, became known as free-hunting, or Wilde Sau (Wild Boar) attacks.  The original experimental unit was rapidly expanded into Jagdgeschwader 300, 301, and 302, all folded into Jagddivsion (Fighter Division) 30 representing a force of some 100 Bf 109-G5/6s.  The tactics were indeed difficult to perfect, between the demands of night combat flying and coordinating with ground flak batteries to avoid friendly fire.  Still, the Wilde Sau defense shot down hundreds of Allied bombers into early 1944 – but it was very costly.  Wilde Sau ultimately represented a stopgap measure against night raids as better night fighters, radars, and other countermeasures were developed.  For the Bf 109s of the Wilde Sau, combat losses rose, replacements were not forthcoming, and mission readiness declined.  Wilde Sau operations were discontinued in the Spring of 1944.

Eduard’s 1:48 scale Wilde Sau Episode One: Ring of Fire Dual Combo Set contains TWO complete kits of the Bf 109G-5/G6.  Between the two kits, the box contains a total eight blue-gray injection molded polystyrene sprues totaling 371 parts.  Approximately 54 of these parts go unused here.  Two sets of clear parts add another 28 parts, but only 20 are used here.  This edition also comes with 16 cast resin parts and 102 photoetched metal parts on two frets (those parts are split evenly and between the two kits).  There is also a pre-cut self-adhesive masking set used for the windscreens and canopy of both airplanes.  As a nice little added bonus, Eduard included a small lapel-type pin with the Wilde Sau emblem.  The full-color instruction booklet organizes the build over 10 pages.   The decals come on four sheets: one primary sheet with all the markings, two sets of airframe stencil decals, and one small correction insert.  Markings are provided for ten Wilde Sau Bf 109s:

Strengths:  The retooled Eduard Bf 109 family is excellent by any standard.  They even hold their own against the exquisite Tamiya Bf 109 kit.  We have reviewed many of Eduard’s 1:48 scale Bf 109s (which you can browse through HERE). Many of these past observations apply equally this case.

Exterior surface details are sublime, from the recessed panel lines to rivets and fasteners.  Eduard 109s share a range of construction options, including the positionable canopy, separate leading edge slats, flaps, ailerons, elevator, rudder, and radiator flaps.  While the instructions show the separate elevators going straight-in, you can easily modify them if you want them dropped.  There is an even larger mounting pin for the rudder, so to deflect the rudder (if that’s the look you’re going for), just a bit of work hacking off that mounting pin and sanding it smooth will get the job done.

The cockpit, especially with the photoetched metal instrument panel, belts, and clear-cast fuel pipe, is a real highlight.  In other words, the plastic parts for the kit cockpit are very good on their own, but the photoetched metal parts in the ProfiPACK set really elevate the detail and accuracy.

To your reviewer, one of the most significant “stand-out” features of this kit set is the attention to detail that Eduard paid to capture all the varied and complex Wilde Sau  configurations.  The research behind this project is evident for all to appreciate.  Beyond getting the night fighter details correct, the range of subtitles between the different individual airframes is carefully and conscientiously represented here.  The PE and cast resin details for the Wilde Sau aircraft are great and include the flame dampening shrouds, new wheels, and the Eberspächer acoustic pipe whistles.

In terms of painting and markings, this dual kit combo is outstanding. The masking set also comes in handy – it’s pre-cut, self-adhesive, and will save quite a bit of time and effort masking the clear parts.  The markings options really make this offering from unique and poignant.  These 10 schemes are each quite notable, and capture the many different styles of nigh fighter colors flown on Wilde Sau aircraft.  These are not your “typical” Bf 109 paint schemes and they all have a lot of allure.   The decals were printed in house by Eduard and feature excellent color, resolution, and detail.  The main decal sheet appears to be of Eduard’s new style of wet transfer decals (as opposed to water slide decals).  A good guide to using wet transfers can be found HERE).

Weaknesses:  No substantive critiques of this kit set come to mind.

Once again, Eduard provides another consistently great offering in their 1:48 scale Wilde Sau Episode One: Ring of Fire Dual Combo Set.  The addition of the night fighter-specific detail parts and the wide range of excellent markings options make this an irresistible offering to many scale modelers.  We are looking forward to what an “Wilde Sau Episode Two” may bring.

Sincere thanks are extended to everyone at Eduard for the review sample.  You can visit them on the web at http://www.eduard.com and on Facebook at https://www.facebook.com/EduardCompany.