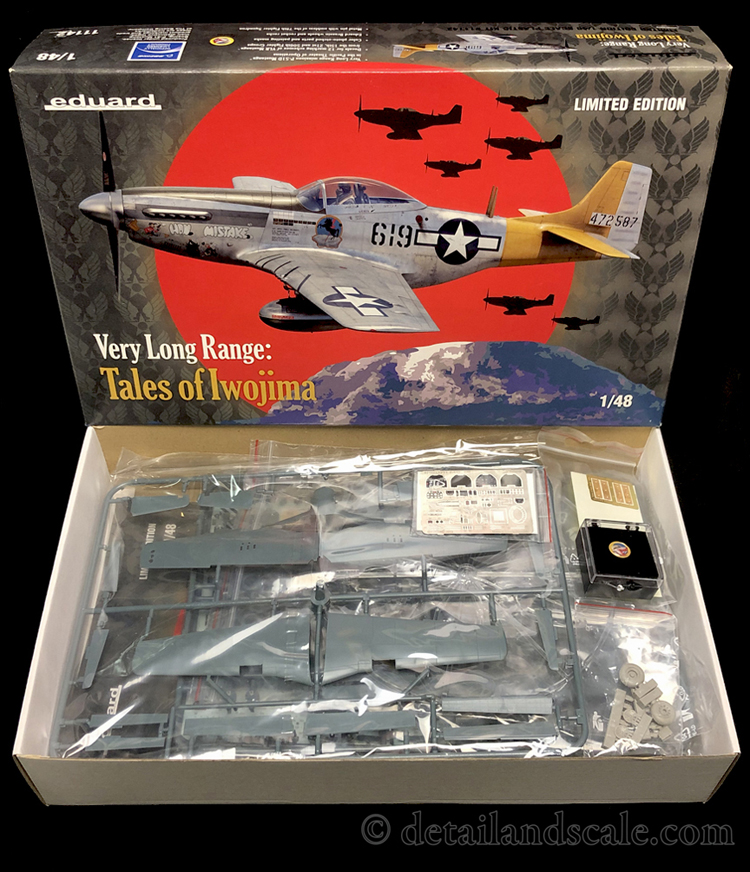 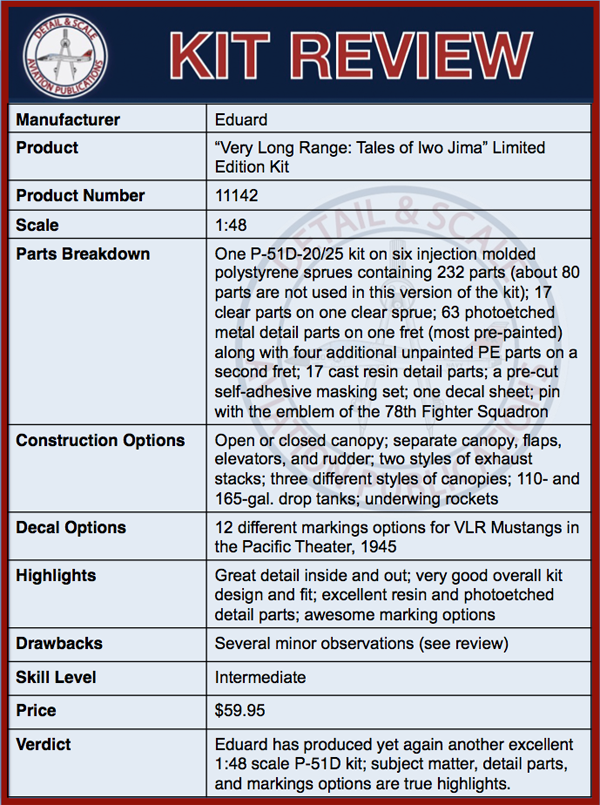 The P-51 Mustang is forever linked to the defense of Allied bomber formations and ground attack missions over Europe during the Second World War.  However, P-51s also served in the Pacific theater of operations, and joined the effort at the beginning of 1945.   Here, we take a look at the most recent member of Eduard’s growing family of 1:48 scale P-51Ds:  a limited-edition boxing of their Mustangs with parts and markings for the Very Long Range (VLR) P-51Ds that operated from the island of Iwo Jima in 1945.  Eduard had originally intended to premier this kit at the IPMS/USA Nationals in San Marcos, Texas.  The COVID-19 crisis cancelled the convention, but it did not stop Eduard from launching this limited edition set in August 2020.  Let’s check it out.

The NA-73X first flew on 26 October 1940.  It incorporated a revolutionary laminar flow airfoil wing derived from NACA flight test data and an innovative under-fuselage ducted engine cooling system.  Mustangs were very fast, maneuverable, and well-armed.  Early versions entered production in May 1941 and went into combat with the RAF 11 months later.  These were powered by Allison engines and were typically equipped with two .50-calibre nose-mounted and four .30-calibre wing-mounted machine guns.  The 1,100hp Allison V-1710-39 powerplant provided impressive performance, but only up to about 15,000 feet.  RAF Mustang Marks I and II were soon followed by the improved P-51As, Bs, and Cs operated by the USAAF and the RAF.  British experimentation with the supercharged Merlin powerplant provided for outstanding high-altitude performance, and by mid-1943, Packard-built Merlin engines became standard for new build P-51s.

During WWII, P-51s saw action in the European, North African, Mediterranean, and Pacific theaters.  Mustangs claimed 4,950 air-to-air kills.  In USAAF service, P-51s, with their very long range, escorted bomber formations over Europe beginning in 1943 and as ground attack and close air support aircraft following D-Day.  The definitive P-51D was fitted with a Plexiglas bubble canopy providing excellent 360-degree visibility, and the aircraft could reach around 440 MPH while its service ceiling was just shy of 42,000 feet.  Armament consisted of six wing-mounted .50-caliber machine guns while underwing pylons permitted the use of range-extending drop tanks, along with rockets and bombs.

Once Allied air operations began on Iwo Jima and Okinawa after they had been taken in the Pacific, the Mustang became relevant in the offensive against Japan.  From those locations, P-51s had the range to reach the Japanese home islands.  The “very long range,” or VLR P-51Ds, were deployed with the 15th, 21st, and 506th Fighter Groups (FGs) of the USAAF 7th Fighter Command in the Far East.  They entered combat in April 1945, serving as bomber escorts for B-29 strikes over Japan and conducted ground attack missions using bombs and rockets.  VLR P-51Ds were standard block P-51D-20-NA or P-51D-25-NA aircraft but differed from their European counterparts in a few key respects.  Behind the canopy, the twin antenna masts of the AN/ARA-8 VHF radio transponder homing system were installed (nicknamed as the “Uncle Dog” system, as they would home in on a signal consisting of the Morse code letters “U” or “D”). This system was critical for long-distance navigation.  The two antennas replaced of the standard AN-104A radio antenna mast, which was moved under the fuselage to between the wheel wells.  The aircraft battery was relocated to the engine compartment, as it was replaced by the SCR-695 IFF transmitter behind the cockpit.  VLR Mustangs also only flew with the 110-gallon or 165-gallon drop tanks.  VLR missions were physically and mentally arduous and involved the longest missions flown by P-51s during WWII, often exceeding eight hours and pilots frequently landed with only a few gallons of gas remaining.  Their long duration flying over open ocean added additional inherent risks, from weather to navigation errors.  Proportionally, a high number of VLR Mustangs were lost.  By the cessation of hostilities, VLR Mustangs had claimed 225 Japanese aircraft and were credited for the destruction of hundreds of ships, trains, buildings, airfields, radar stations, and other targets of opportunity, including another 669 enemy aircraft damaged or destroyed on the ground.  For more on the topic, see the August 2020 edition of the Info Eduard newsletter that contains a riveting interview with William B. Ebersole, a former VLR Mustang pilot (which you can find HERE) and whose P-51D, “Hon. Mistake,” is included on the decal sheet.

Eduard’s 1:48 scale Very Long Range: Tales of Iwo Jima Limited Edition contains one P-51D-20/25 kit on six injection molded polystyrene sprues containing 232 parts (about 80 parts are not used in this version of the kit).  Seventeen clear parts come on one clear sprue.  This Limited Edition set also has 63 photoetched metal detail parts on one fret (most of them are pre-painted) along with four additional unpainted PE parts on a second fret.  Seventeen cast resin detail parts are also provided along with a pre-cut self-adhesive masking set and one decal sheet.  This limited edition set also comes with a very nice pin featuring the emblem of 78th Fighter Squadron.  The full color instruction booklet, which also includes a historical narrative of the VLR Mustangs written by Brian Walters, organizes the build over 14 pages.  Markings for a 12 schemes include:

Strengths:  Over the last decade, Eduard has produced some truly superlative 1:48 scale injection-molded model kits, starting with their family of Spitfires, Bf 109s, Fw 190s, and P-51Ds.  All the good things I’ve described about the basic Eduard 1:48 scale Mustang in previous reviews (which you can find HERE) apply to this kit as well.   As noted in earlier reviews, I think that Eduard can indeed claim “best 1:48 scale P-51D” with this kit, though it is not without a few imperfections.

To recap previous reviews, however, surface details are very accurate.  Eduard has nailed the relatively featureless wing surfaces while rivet/fastener details on the fuselage and tail surfaces are as exquisite as they are sublime.  Test fitting of the fuselage halves and wings appears airtight.  The only fit that seems not virtually seamless involves the upper wing roots.  It looks a little fiddly, but I suspect that when all the assemblies come together, the fit should be far more stable.

Eduard’s P-51D has a number of building options, including an open or closed canopy, separate landing flaps, ailerons, rudders, elevators, and radiator exhaust, two canopy styles, the single rear-view mirror, and shrouded or unshrouded exhaust stacks.  Optional paper or metal-style external fuel tanks are also provided.  Other building options found on the sprues which aren’t used in this issue of the kit include the uncuffed propeller, bombs, and rockets.  In this kit, the details of the VLR Mustangs look to be perfectly represented, from the dual antenna masts, relocated radio antenna, two styles of gunsight, and the IFF set in the rear cockpit.  The really large 110- and 165-gallon drop tanks come on Sprue J.  Those big tanks are distinctive.  A scribing template is also provided for the Uncle Dog antenna assembly panel.  Other features are present, such as the rocket pylon mounting posts and underwing mounting plates.  The cast resin main wheels and tail wheels look fabulous with a gorgeous tread pattern on the main wheels.

The cockpit features separate frames for the sidewalls, a multi-part seat, and excellent representations of the radio, battery, and fuel tank, down to the separate parts for the wiring and fuel line.  The really impressive elements here are the photoetched parts which add a great deal of detail and visually interesting features to the cockpit, such as the pre-painted instrument dial faces, the gorgeous pre-painted harnesses (complete with simulated stitching details), various placards, and the photoetched throttles, trim wheel, and other parts.  In sum, the cockpit is a knockout when these detail parts are added.

The markings options are awesome.  Eduard really knows how to capture some colorful, eye-catching schemes.  I’ve always been fascinated by Pacific theater Mustangs, and the schemes here are among some of the most beautiful and visually distinctive P-51s ever seen during World War II, and the stories that accompanied them are equally moving.  The kit also has a comprehensive stencil set for the airframe, gear, wheels, prop blades, and drop tanks.  The decals were printed in-house by Eduard, and they all look great.  I can see no technical errors in printing.  There’s also a very valuable painting guide highlighting where natural metal versus aluminum lacquer-painted surfaces are found on silver P-51s.  Also, the 78th Fighter Squadron pin is a nice touch.

Weaknesses: I cannot offer any major or substantive critiques of this kit.  One minor issue for some folks is that if PE parts aren’t your cup of tea, the detail on the pilot’s instrument panel is really minimal.  The idea is to either use the PE parts or kit supplied instrument panel decals.  Note that if you want to position the ailerons, rudder, and elevators in anything but the neutral position, you’ll need to remove their mounting tabs.  Also, be really careful with the thin plastic strip that separates the left and right wheel wells on the lower wing half (Part B-15).  It is pretty fragile, and in some kits, it is warped/bent inward because it is so fine.  My sample is unaffected by this issue, but if that’s a problem in the kit you have, just note it will go back to its proper shape when the gear well assembly is fitted.  The completed landing gear are a bit weak, so watch out when handling.

Eduard keeps on producing really impressive 1:48 scale P-51D offerings, and Very Long Range: Tales of Iwo Jima does not disappoint.  It possesses a great combination of detail and allure that is really hard to beat.  As a limited edition release, I would advise P-51 fans to get one while they can.