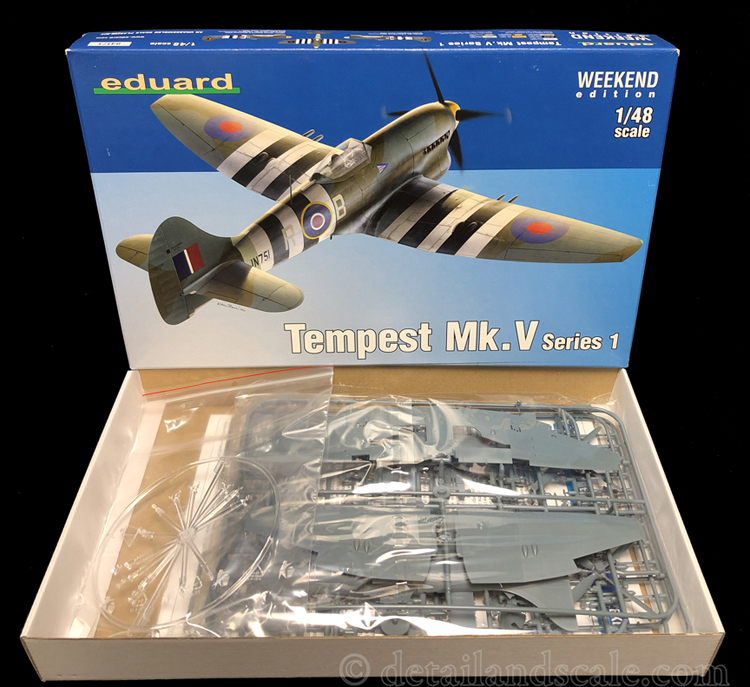 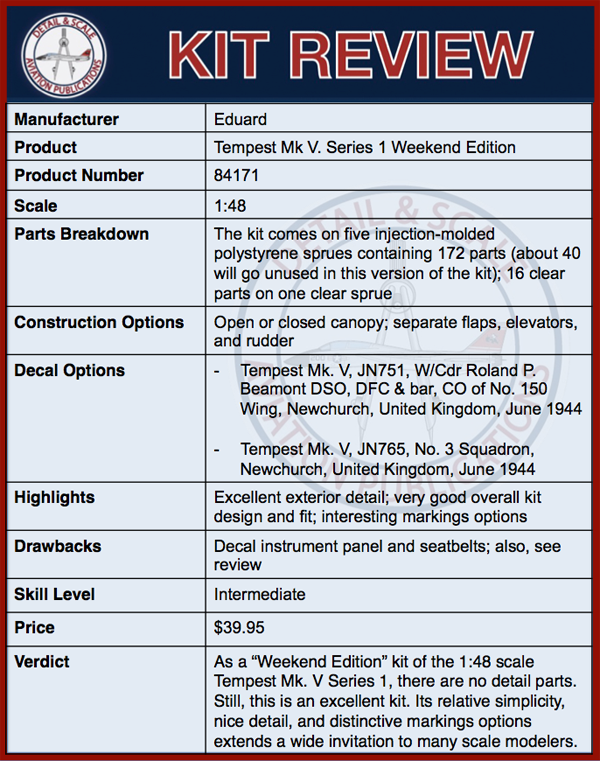 In the final years of World War II, the RAF’s Hawker Tempest emerged as one of the fastest and most lethal airplanes of the war.  In 1997, Eduard put out their first 1:48 scale Hawker Tempest Mk. V.  At the end of 2018, Eduard released an entirely new tool kit of the iconic Tempest in 1:48 scale.  Here, we examine the no-frills Weekend Edition of their Tempest Mk. V Series 1.

While the Hawker Typhoon was one of the RAF’s most notable airplanes of WWII, the Typhoon’s performance was poor at both high altitude and high airspeeds.  Hawker engineers, led by Sydney Camm, developed a Typhoon variant in 1941 that incorporated a thinner, laminar flow wing design first known as the Hawker P. 1012, or Typhoon II.  The wing was redesigned into a near-elliptical shape with a 43-foot span and wing surfaces were very purposefully flush-riveted to optimize laminar flow.  It was also designed to incorporate 800 rounds of 20 mm ammunition for four Hispano cannons.  Additional internal fuel tanks were added.  Yet, the heart of the new design was the powerful Napier Sabre IV powerplant.  The accumulated changes prompted a new name, and the Typhoon II became the Tempest.

Six prototype Tempests were built as a single Mk. I, two Mk. IIs, one Mk. III, one Mk. IV, and one Mk. V variant.  Each example featured a range of different airframe and powerplant configurations.  Delays with the other prototypes saw the Mk. V first take to the air in September 1942.  Tempest flight tests validated the new design that indeed overcame the Typhoon’s performance shortcomings.  By 1943, a production line for the Tempest V was established in Hawker’s Langley facility.  Low rate initial production fed airplanes into an extensive service trial program at Boscombe Down.  By April 1944, the Tempest was ready for combat.

From about 10,000 feet down to the deck, the Tempest was the fastest low-altitude propeller-driven aircraft of the war.  Tempests flew fighter sweeps and reconnaissance missions.  Leading up to D-Day, Tempests frequently flew into northern France, Holland, and the Netherlands to attack virtually everything:  German airfields, radar installations, ground vehicles, coastal shipping, and “vengeance-weapon” launch sites.  The high-speed performance of the Tempest made it an excellent interceptor of the V-1 buzz bombs.  Tempests brought down no less than 638 V-1s inbound to England.  In September 1944, Tempests supported Operation MARKET GARDEN and by the end of 1944, their missions were generally focused on systematic destruction of northern German railways.  By 1945, the Tempest had begun to accumulate kills against the Me 262, and by the end of the war, the airplane had accumulated an overall kill-to-loss ratio of 6.5 to 1.  What had started out as a redesign of the Hawker Typhoon produced a definitive contribution to close the Second World War in Europe.

Eduard’s 1:48 scale Tempest Mk. V Series 1 kit comes on five injection molded polystyrene sprues containing 172 parts.  In this version of this kit, about 40 of these parts will go unused.  One clear sprue holds an additional 16 parts.  Markings for two airplanes are provided:

Strengths:  As a Weekend Edition kit, this boxing of Eduard’s Tempest is a “no frills” version with just the plastic and only two sets of markings options.  It’s been around for a while now and has garnered a reputation for accurate overall size and shapes.  The surface airframe detail is excellent, featuring crisp and restrained panel lines.  The mix of raised and recessed screw, rivet, and fastener detail is intricately executed.  The surface detail on this kit is jaw-dropping.  The ailerons, rudder, and elevators are separate parts and can be positioned as desired.  The canopy can also be positioned opened or closed.  The full span, single-piece lower wing ensures you will get the correct dihedral.  Test fits of the fuselage and wing halves look to be flawless, though some builders have reported a few tricky fits here and there.

The kit cockpit is okay for injection molding, and it features a sufficient level of detail.
Instrument panel details are represented by decals.  Scale modelers will be very impressed by the fidelity of detail in the main gear, main gear wells, and tail wheel well and gear doors.  You can read the “Dunlop” imprimatur on the main gear tire sidewalls.  The structures of the main gear wells appear to be very well represented, only lacking wire bundles or plumbing.  The main gear themselves and their retraction cylinders and other struts are very nicely detailed and crisply molded.  Further, ejection pin marks are out of the way and won’t be bothering anyone.  Other smaller details are to be commended, too, including the exterior lights and very nicely printed decals that represent the straps on the drop tank pylons.

The markings were printed in-house by Eduard.  Colors are accurate, vibrant, and in perfect register.  Carrier film is fairly thin and quite well restrained.  The print fidelity, including for the finest airframe stencils, is very good.  I also like the choice of schemes represented here.

Weaknesses:  The injection-molded instrument panel is a little basic, and I would recommend using the kit-supplied instrument panel decal.  While seatbelts and harnesses are provided, they are in decal form (not your reviewer’s favorite choice for belts).  The biggest issue is the lack of tail plate reinforcement parts.  Series 1 Tempests had issues with the strength of the tails (some of the earliest airplanes had a propensity for catastrophic structural failure there).  Multiple external reinforcement plates were added and largely solved the problem.  Along with the protruding cannon barrels, those plates were among the key distinguishing features of the Series 1 aircraft.  Plate parts came in the form of photoetched details in the ProfiPACK edition of the kit, but since there are no photoetched details here, no plates are included.

Eduard’s Weekend Edition kit of the 1:48 scale Tempest Mk. V Series 1 is a streamlined plastic kit edition of this kit.  Fans of WWII, RAF, and Tempest-related subject matter will certainly enjoy this issue of the kit, and its relative simplicity, nice detail, and classic markings options extends an invitation to the scale modelers looking for a more straightforward build without all the detail part bells and whistles.

Sincere thanks are owed to Eduard for the review sample.  You can visit them on the web at http://www.eduard.com and on Facebook at https://www.facebook.com/EduardCompany. Also, thanks to Ben Pluth for sharing observations on his in-progress build of the Eduard Tempest.