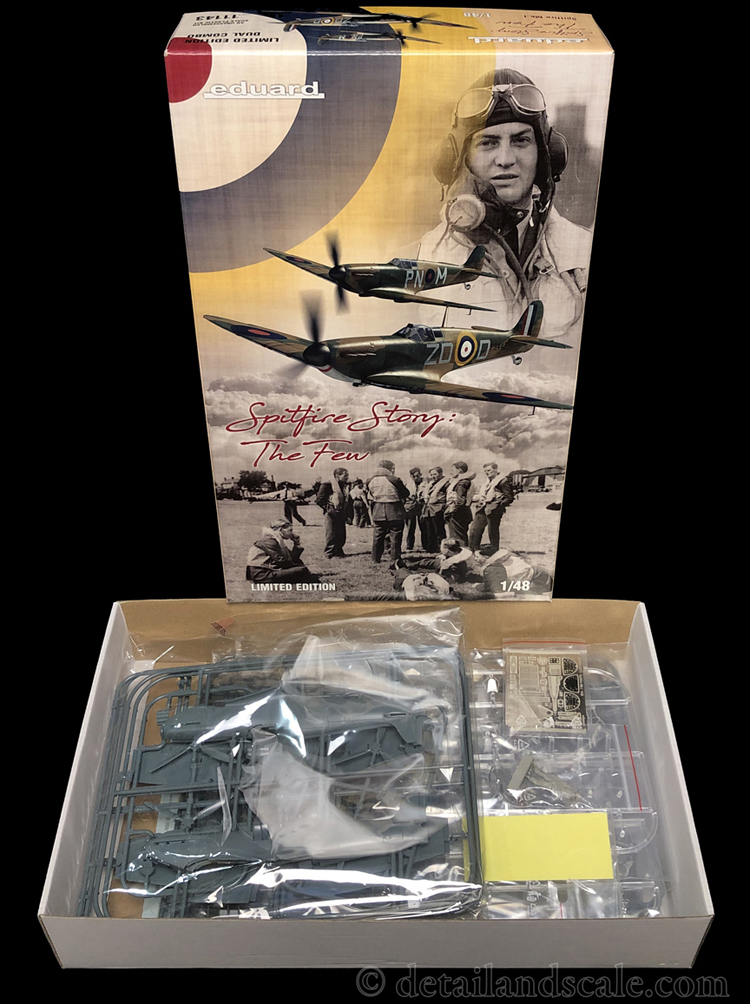 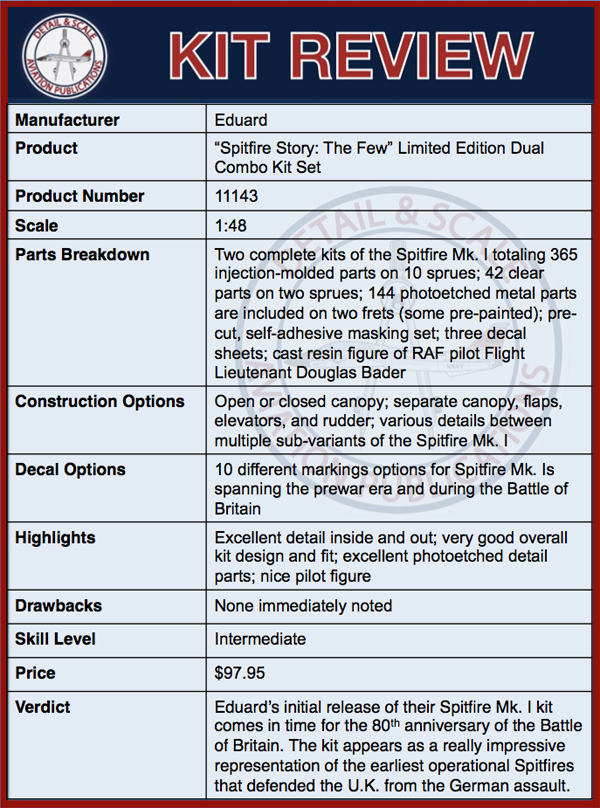 “Never in the field of human conflict was so much owed by so many to so few.”  These were the words of British Prime Minister Winston Churchill, paying tribute to the fighter pilots of the RAF in a speech in the House of Commons on 20 August 1940.  In the following two weeks, the Battle of Britain reached a turning point where the Luftwaffe’s attacks on the U.K. military climaxed, and then soon transitioned into the infamous Blitz.  The RAF’s Spitfires and Hurricanes, against the odds, repelled the German air assault.  The first version of the legendary Supermarine Spitfire – the Spitfire Mk. I – was heavily involved in the effort.  Eduard has recently added a brand-new Spitfire Mk. I to their large family of excellent 1:48 scale Spitfire kits.  Their Spitfire Mk. I was premiered in a dual kit combo limited edition set (the first in a planned series) called “Spitfire Story: The Few” in August 2020 – just as the world commemorates the 80th anniversary of the Battle of Britain.

Supermarine’s production capability was initially not able to handle production of a new airplane, and it was delayed to the point that the first production Spitfire Mk. I took flight nearly two years later in 1938.  It was indeed a promising aircraft.  The Spitfire Mk. I was quite agile.  It could reach a maximum speed of 362 mph and climb at nearly 2,500 feet per minute until reaching its service ceiling of 31,000 feet.  It was powered by the 1,030 hp Merlin Mk. II engine, until the Merlin Mk. III was introduced with the 175th production airframe.  The first 77 Mk. Is had a two-bladed wooden prop that was superseded by a larger three-bladed propeller that notably improved take-off performance, maximum speed, and ceiling.  A blown canopy replaced the original flat canopy in 1939 to improve visibility.  Beyond these, many dozens of additional small and incremental changes (“fine-tuning”) were implemented over the course of Mk. I production and service lifetime.  A total of 1,567 Mk. Is were produced.

The Spitfire Mk. I achieved operational status with 19 Squadron at RAF Duxford on 4 August 1938.  It was a front-line combat aircraft for a mere 18 months before being replaced by the much-improved Spitfire Mk. V.  Yet, in that time, the Spitfire Mk. I contributed invaluably to the war.  Its first encounter with the Luftwaffe was at Dunkirk and demonstrated that the fearsome Bf 109 had finally met its match.  During the Battle of Britain, Spitfire Mk. Is famously defended Great Britain alongside the Hawker Hurricane and ultimately repelled the Nazi onslaught above England.

Eduard’s 1:48 scale “Spitfire Story: The Few” kit contains two Spitfire Mk. I kits amounting to 365 injection-molded parts on 10 sprues and 42 clear parts on two sprues (and about 80 of which are not used).  Additionally, 144 photoetched metal parts are included on two frets (about a quarter of them are pre-painted).  There is also a pre-cut, self-adhesive masking set and three decal sheets.  This edition contains a 1:48 scale cast resin figure of a standing RAF pilot representing the famous Flight Lieutenant Douglas Bader.  The full color instruction booklet organizes the build over 15 pages.  Markings for ten airplanes are included:

Strengths:  Eduard’s new Spitfire Mk. I builds upon a legacy of their later-model Spitfire kits, which are arguably the best of their kind in 1:48 scale.  Tamiya released a very popular Spitfire Mk. I in late 2018 (and you can read our review of it HERE).  What we have here is Eduard’s very fine interpretation of the Spitfire Mk. I, and it certainly holds its own against the Tamiya kit on many levels.  More on a head-to-head comparison at the conclusion of this review.

Eduard’s 1:48 scale Spitfire Mk. I shines sitting in the box.  The first impression is of the exceptional quality of surface details – just perfection.  There’s a combination of beautiful recessed and raised details (raised rivets and fasteners where they should be) that should be very nice to work with.  Fabric covered control surfaces display a slightly perceptible roughened texture.  I test fit the major assemblies, and at that early stage, fit appears to be airtight and just about perfect.

The parts breakdown is quite conventional (left and right fuselage halves, upper and lower wing halves.  There is, however, a nice internal wing spar that will help solidify the wings.  Construction options include an open or closed canopy, an open or closed cockpit door, and separate ailerons, elevators, and rudder.  The control surfaces are engineered to go straight-in, and if the builder wishes to position them in anything other than the neutral position, removal and clean-up of the mounting tabs will be necessary.  Underwing radiator doors can be positioned open or closed.  The kit also captures the myriad of small differences among the Mk. I variant, such as with the optional parts for the original plain windscreen and later armored windscreen, the original fixed-pitch two-blade propeller or the later Havilland/Rotol three-blade props.  Other small details, such as antennas, antenna wires, gunsights, and even fine differences in the cockpit door latching mechanism are faithfully reproduced and presented as construction options.

The kit cockpit will remind a lot of people of the complexity and detail seen in Eduard’s other 1:48 scale Spitfires as they share a basic design lineage.  There is a rather high level of detail and accuracy for an injection molded kit here with the seat, cockpit frame, and sidewall details, but what will really makes this cockpit “pop” are the beautifully made pre-painted, multi-layer photoetched instrument panel, shoulder harnesses and lap belts, and other detail parts.  The exhaust stacks also deserve a mention.  Most injection molded exhaust stacks are flat-ended, but here, they are nicely hollowed out.  The masking set for the clear parts and wheel hubs is a very nice, time-saving feature that will ensure precise masking where it is most needed.  The cast resin figure is another great touch, and it will go very well with the completed model.

Spitfire Mk. I paint schemes were mostly all the same – not a lot of variety.  Yet these markings options cover a range of variations within the Mk. I repertoire while also including various notable and famous aircraft/pilots who participated in the Battle of Britain.  It’s an excellent set of markings, indeed.

Eduard has done a great job with their Spitfire Mk. I, and this limited-edition dual combo boxing of “Spitfire Story: The Few” is really impressive.  For those interested in even more detail, Eduard has already released cast resin wheels, exhaust stacks, gun bays, and a replacement cockpit set in their Brassin line, along with landing flaps, cast bronze landing gear, and LööK pre-painted cast resin instrument panels.  Compared to the Tamiya Spitfire Mk. I, this kit certainly holds its own.  It is a bit more conventional (no single-piece main landing gear here) and it is unlikely to fit with the same ease and ultra-high precision as the Tamiya kit.  However, the Eduard Spitfire Mk. I certainly has a far greater range and complexity of surface detail.  Since some of the sprues are labeled as “Spitfire Mk. I-V,” it looks like we’ve got a lot more early Spitfire kits to look forward to in the near future.