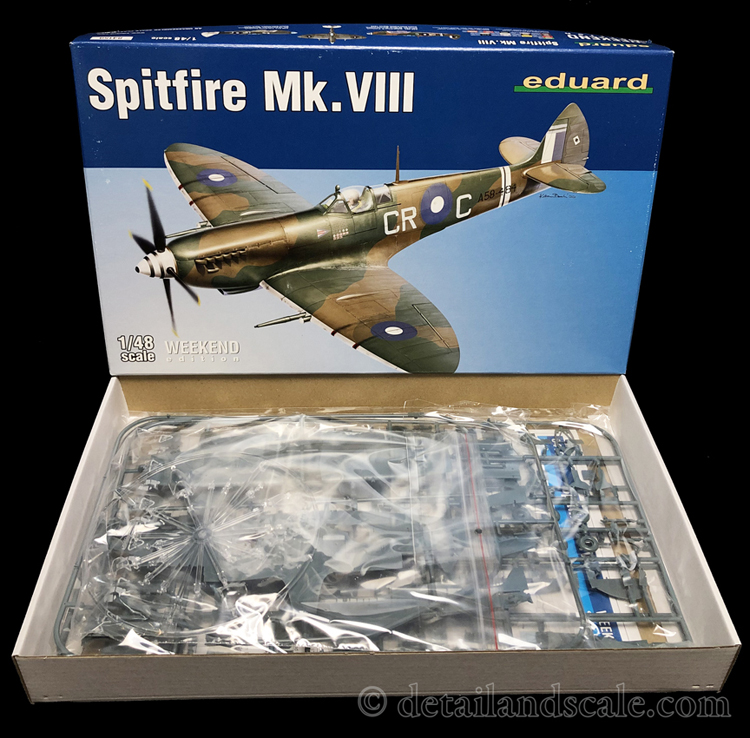 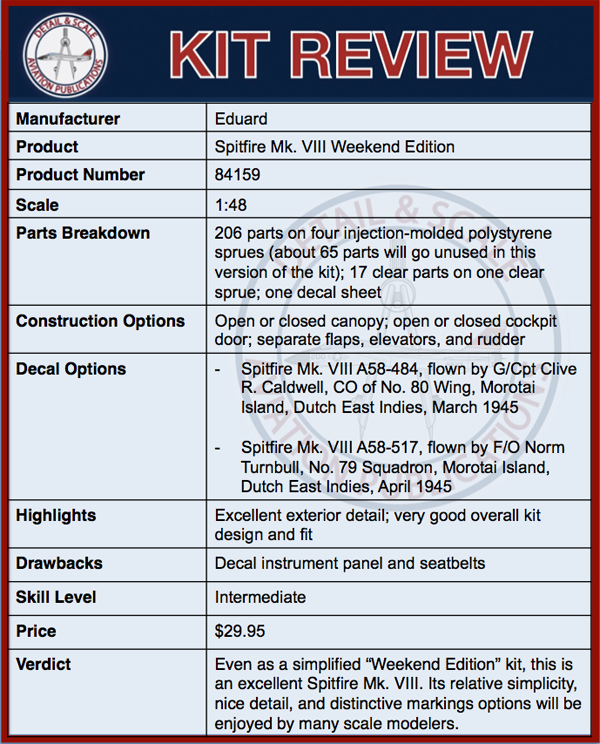 The legendary Supermarine Spitfire took the form of many variants, but the Mk. VIII played a critical role in the air war over Europe during World War II.  Eduard’s Spitfire Mk VIIIs are the best in 1:48 scale, and recently, they released a new Weekend Edition of this kit.  Let’s take a look.

Before 1941, early versions of the Spitfire found themselves relatively evenly matched against the Bf 109.  Then, the Fw 190A came on the scene and significantly outclassed the Spitfire Mk. V.  The Germans had the edge to attain air superiority.  The response to this dire situation was the rapid development and introduction new and improved Spitfires, such as the Mk. VII and Mk. VIII, which centered on either the Merlin 60 or 70 series two-stage supercharged powerplants.  The need for a stopgap Spitfire was urgent.  The first of these new versions ready for combat was the Mk. IX in June 1942.

The Mk. VIII followed the Mk. IX into service.  It was itself derived from the Mk. VII but featured an unpressurized cockpit, a stronger fuselage, and retractable tail wheel.  Mk. VIIIs were powered by either the Merlin 63, 66, or 70 powerplants.  Also, Spitfires from the Mk. VIII onward used only three basic wing types; C, D, and E.  The C-type wing was known as the “universal wing” seen on most Spits after mid-1942.  This standardized wing design was simplified for faster manufacturing and could be fitted with various armament options.

Eduard’s 1:48 scale Weekend Edition kit of the Spitfire Mk. VIII kit contains four blue-gray injection molded polystyrene sprues containing 206 parts.  Approximately 66 of these parts go unused in this version.  Panel lines, rivets, and fasteners are all delicately represented by engraved, recessed details.  Seventeen clear parts are present on a single radial sprue, but only nine of them are used in this kit.  Decals are provided for two aircraft

Strengths:  Eduard’s Spitfire Mk. VIIIs continue to reign as the best of their kind in 1:48 scale.  They are beautiful and virtually flawless.  The kit features delicately engraved, richly detailed and accurate surface details, a great fit, and sound engineering.  Eduard’s kit does justice to the legendary Spitfire.

As a Weekend Edition kit, there are no detail parts or extensive range of markings options.  It’s a “no-frills boxing” that is aimed at scale modelers who are looking for a very straightforward, direct build without an array of markings options and aftermarket or “bells-and whistles” detail parts that characterize a ProfiPACK or limited edition Eduard kit.  Here, scale modelers will find a very well-appointed injection-molded cockpit.  The cockpit entry door can be displayed open or closed, just as with the canopy.  Ailerons, elevators, rudders, and radiator flaps are all separate parts.  They’re designed to go straight in, so if one wished to place the control surfaces in anything but the neutral position, some minor modification of the parts (e.g., removal of the mounting tabs) is necessary.  Exhaust stacks are hollowed out at their ends.

As usual, the instructions are well rendered and easy to follow.  The decals appear to have been printed in-house by Eduard, and the overall look quite good.  I really like the Pacific theater markings, as they are a bit different and capture a sometimes of a less-appreciated chapter of the Spitfire story.  Markings option A is particularly interesting, as it represents the airplane flown by Clive Caldwell, Australia’s top scoring fighter ace of World War II.  He accumulated 27.5 confirmed aerial victories, as the top-scoring Allied ace in North Africa, the world’s leading P-40 ace, and the only Australian fighter pilot to become a two-theatre ace, achieving that status in both the North African and Pacific theatres.

Weaknesses:  Eduard’s 1:48 scale Spitfire Mk. VIII is hard to fault.  Still, the injection-molded instrument panel is a little basic for some, and you really do need to use the kit-supplied instrument panel decal to represent any instrument face details  While seatbelts and harnesses are provided, they are also in decal form (not your reviewer’s favorite choice for belts).

Eduard’s Weekend Edition kit of the 1:48 scale Spitfire Mk. VIII is indeed a very solid kit.  Fans of Spitfire and WWII subject matter will certainly enjoy this issue of the kit, and its relative simplicity, nice detail, and distinctive markings options extends a wide invitation to many scale modelers.