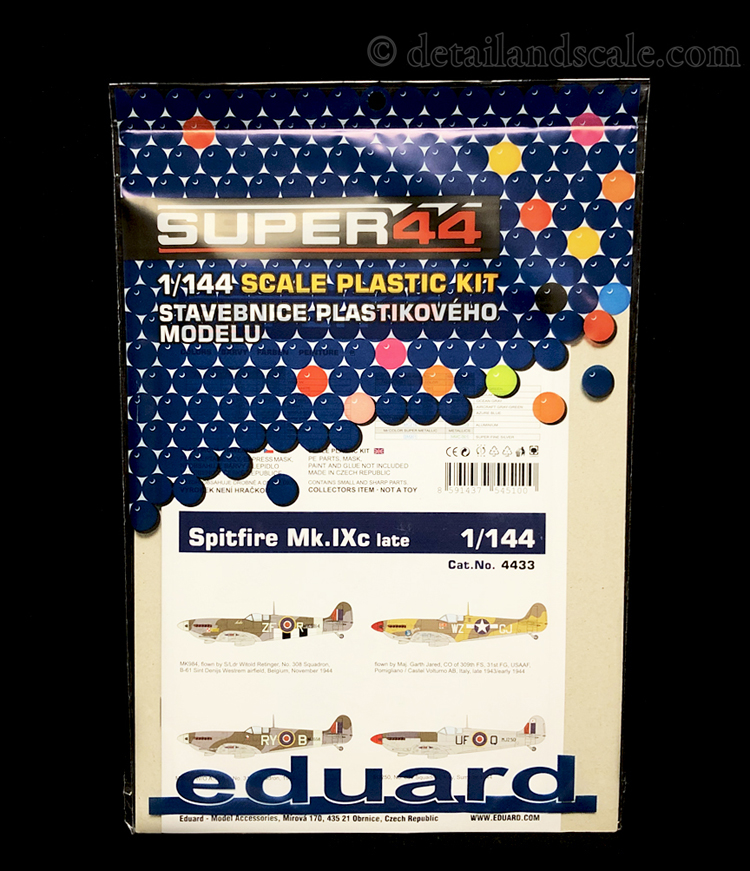 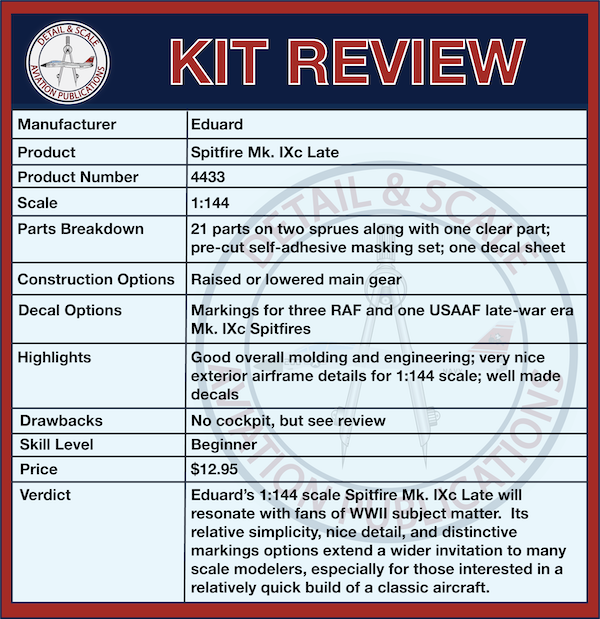 The legendary Supermarine Spitfire helped turn the tide of the Second World War.  Similarly, Eduard’s 1:48 and 1:72 scale families of Spitfire kits are almost as celebrated (among scale modelers, at least!).  In 2013, Eduard started to release a series of 1:144 scale Spitfire kits, and their latest issue, the Spitfire Mk. IXc Late kit just arrived on our review bench.

Up until 1941, early versions of the Spitfire found themselves relatively evenly matched against the Bf 109.  Then, the Fw 190A came on the scene and significantly outclassed the Spitfire V.  This precipitated a crisis for the U.K.  If the situation remained unchanged, the Germans would gain air superiority.  In fact, losses were mounting to the point that Spitfire Mk. Vs were held back from nearly all daylight RAF operations over mainland Europe.

The response featured the development of Spitfires that would be superior to the Fw 190.  These new and improved variants such as the Mk. VII and Mk. VIII centered around the Merlin 60 or 70 series powerplants.  These engines, along with the follow-on Merlin 63s that went into production in 1943, provided immensely improved speed and climb performance, especially between 20,000 and 40,000 feet which was exactly where German opponents had been killing Mk. Vs.

The first of the new Spitfires ready for combat was the Mk. IX.  The need for a stopgap Spitfire was urgent.  By late February 1942, a Merlin 63 had been adapted to the standard Mk. V airframe and the first prototype Mk. IX took to the air.  The type was rushed into full-rate production by June.  Soon after, they began to directly replace the Mk. V.  By this time, the majority of the Spitfires from the Mk VIII on used only three basic wing types; C, D, and E.  The C-type wing was known as the “universal wing” seen on most Spits after mid-1942.  This standardized wing design was simplified for faster manufacture and could be fitted with various armament options.

The introduction of the Mk. IX allowed momentum in the air war to shift back towards the RAF allowing them to resume offensive Spitfire operations over Europe.  Its first kill came on 30 July 1942, downing (in a telling fashion) an Fw 190.  Other Mk. IX distinctions include the highest-ever interception of WWII with a Mk. IX shooting down a Ju 86R at over 43,000 feet.  In late October 1944, the Mk. IX was the first allied aircraft to down an Me 262.  By the end of the war, more than 5,600 Mk. IXs had rolled off the production line and many continued their service with the RAF and smaller air forces well into the early jet age.

Strengths:  Eduard’s small-scale Spitfires are part of their SUPER44 product line.  These Spitfire kits have a great reputation, just like their other larger-scale versions of the Spit.  The surface details are rich and complex even for 1:144 scale, and all the panel lines are very delicately recessed.  Raised detail is present where it is needed (e.g., the rudder).  The parts breakdown is simple, efficient, and works well for this scale.  This includes a single-piece wing.  The two different styles of exhaust stacks, the landing gear, gear doors, wheels, underwing radiators, prop, and spinner round out the smaller parts.  The single-piece windscreen and canopy look quite nice.

The markings options are all quite interesting (I do like that natural metal version!) and decals were printed in-house by Eduard.  They look great from a printing and decal production perspective.

Weaknesses:  Only one observation here:  there’s no cockpit!  It’s a very small scale kit, indeed, but the space under the canopy is essentially empty.  If you don’t care, I’d say paint it black in there and get on with your build.  If you do care, Eduard’s pre-painted photoetched metal set, # 144006, provides a complete cockpit set that more or less folds up and drops into this kit.  Problem solved!

Eduard’s 1:144 scale Spitfire Mk. IXc (late) will resonate with fans of WWII subject matter.  Its relative simplicity, nice detail, and distinctive markings options extend a wider invitation to many scale modelers, especially for those interested in a relatively quick build of a tiny classic aircraft.