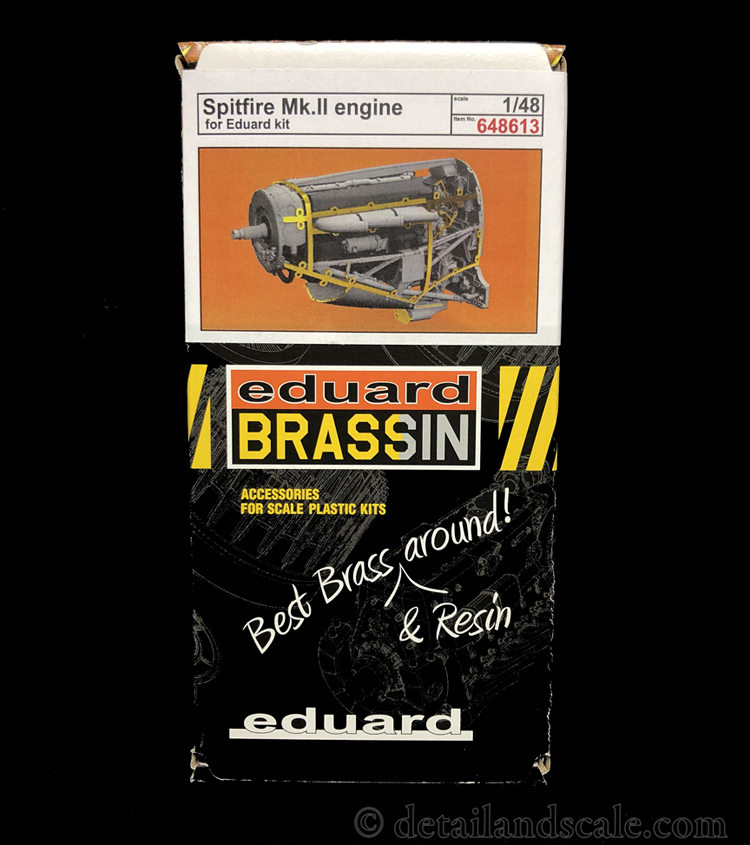 Eduard has been doing a very impressive job with their early 1:48 scale Spitfire series (and see our reviews of these kits HERE).  Eduard has released various photoetched metal and cast resin detail sets for their early Spits.  In this review, we check out their engine set in for the 1:48 scale Eduard Spitfire Mk.II released in Eduard’s Brassin product line.

Brassin #648613 (Spitfire Mk.II Engine; MSRP: $44.95) contains 48 cast resin parts and 25 photoetched metal parts on one fret.  This is a complete Rolls-Royce Merlin XII powerplant, plus all the separate cowling panels, covers, engine mounts, and the firewall.  The Merlin XII was an upgraded Merlin Mk.II that powered the Spitfire Mk.I.  This new engine was uprated at 1,175 hp and used a 70:30 water:glycol coolant solution mix.

Eduard has done some spectacular 1:48 scale engine sets, such as their Fw 190A and P-51D engines, but this Spitfire powerplant is truly exceptional.  It is a real gem with jaw-dropping detail.  Once the engine cowling and a few other parts of the kit are removed, one enters a detailer’s paradise as construction, painting, and detailing begins.  The main engine body is a breathtakingly well-detailed and perfectly cast single part, from the cam covers to wiring, bolt details, and other features.

The back end of the engine is a very busy place, with about 20 cast resin and PE parts comprising the supercharger, intercooler, carburetor, water pump, the dual fuel pumps, boost control unit, oil filters, air compressor, and more.  In reviewing my Merlin engine references, I do not think Eduard missed so much as a bolt.  Other notable parts replete with detail are the engine firewall and the engine mounts.  Some of the larger pipework, such as the coolant inlet, coolant outlet, and coolant return piping systems are provided as cast resin parts.  The instructions also provide a clear, step-by-step guide for the finer wiring and hoses represented by 0.2, 0.3, 0.4, 0.5, and 0.6mm diameter wire (not included).  The PE cowling panel framing goes around the engine assembly.  The cowling panels are beautifully detailed, inside and out.

At least for your reviewer, the engine set is one of the finest little jewels that Eduard has produced, with excellent research, design work, and casting playing equal roles in making it a clear success.  This Brassin set is an incredibly inviting opportunity for an Eduard Spitfire Mk.II project.

We extend our sincere thanks to Eduard for the review sample.  You can visit them on the web at http://www.eduard.com and on Facebook at https://www.facebook.com/EduardCompany/.