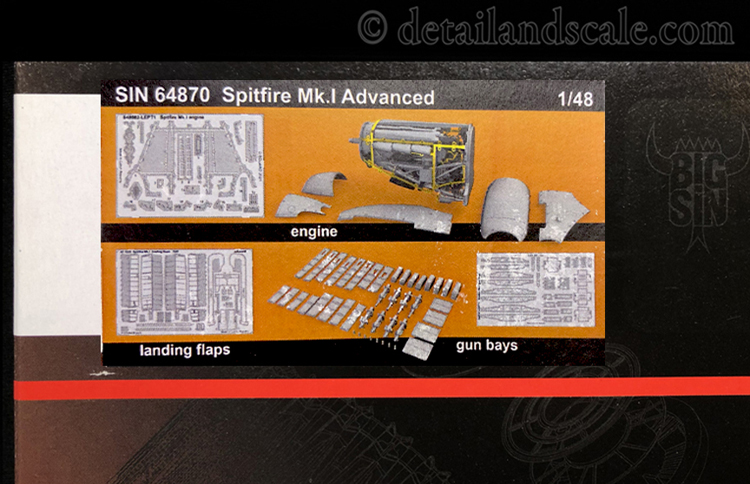 Eduard has been doing a very impressive job with their early 1:48 scale Spitfire series (and see our reviews of these kits HERE).  Eduard has released various photoetched metal and cast resin detail sets for their early Spits, and here, we check out their BIG SIN Advanced detail set that bundles together three individual detail sets at a savings for the customer.

First, let’s look at the Gun Bays set.  This set allows scale modelers an opportunity to open up all eight wing gun bays on their Spitfire Mk.I.  It features 42 cast resin parts and 51 photoetched metal parts on one fret.  Once the gun and ammunition bay panels are removed from the upper wing halves on Sprue J using a fine razor saw, the bays themselves are fashioned from photoetched metal parts.  Then, the cast resin machine guns and ammo boxes are set into place and dressed up further with fine PE metal and resin details.  The gun and ammo bay panels themselves are all separate cast resin parts that also have photoetched metal detail elements for their inner surfaces.  Overall, this set is not too complex.  Furthermore, the quality of casting and PE parts manufacturing is excellent.

Second, the Engine Set contains 48 cast resin parts and 25 photoetched metal parts on one fret.  This is a complete Rolls-Royce Merlin Mk.II powerplant, plus all the separate cowling panels and covers.  Eduard has done some spectacular 1:48 scale engine sets, such as their Fw 190A and P-51D engines, but this Spitfire powerplant is truly exceptional.  It is a real gem with jaw-dropping detail.  Once the engine cowling and a few other parts of the kit are removed, it is go-time with these parts.  The main engine body is a breathtakingly well detailed and perfectly cast single part, from the cam covers to wiring, bolt details, and other features.  The back end of the engine is a very busy place, with about 20 cast resin and PE parts comprising the supercharger, intercooler, carburetor, water pump, the dual fuel pumps, boost control unit, oil filters, air compressor, and more.  In reviewing my Merlin engine references, I do not think Eduard missed so much as a bolt.  Other notable parts replete with detail are the engine firewall and the engine mounts.  Some of the larger pipework, such as the coolant inlet, coolant outlet, and coolant return piping systems are provided as cast resin parts.  The instructions also provide a clear, step-by-step guide for the finer wiring and hoses represented by 0.2, 0.3, 0.4, 0.5, and 0.6mm diameter wire (not included).  The PE cowling panel framing goes around the engine assembly.  The cowling panels are beautifully detailed, inside and out.

Third, the Landing Flaps set consists of 30 parts on one photoetched metal fret.  With the help of a handy pair of cutting guides/templates provided on the parts fret, the flap surfaces on the lower wing half are removed, while the corresponding area of the inside surfaces of the upper wings are sanded smooth.  Once that prep work is complete, then, quite a bit of bending and folding begins as the interior surfaces of the flaps come together.  A photoetched metal bending tool and some very thin CA glue are really necessary to make this set work, of course.  When completed and installed, these parts are bound to look gorgeous and provide an interesting layer of additional detail beyond what the kit itself provides.

Overall, this BIG SIN set is very impressive, and at least for your reviewer, the engine set is the jewel at the center of it all.  Furthermore, this bundling of sets is done at a savings of about $25.00 compared to if one were to purchase them separately.  It is a solid deal with an excellent value-to-dollar ratio, and for the detail-oriented scale modeler, this BIG SIN set is an incredibly inviting opportunity for an Eduard Spitfire Mk.I project.