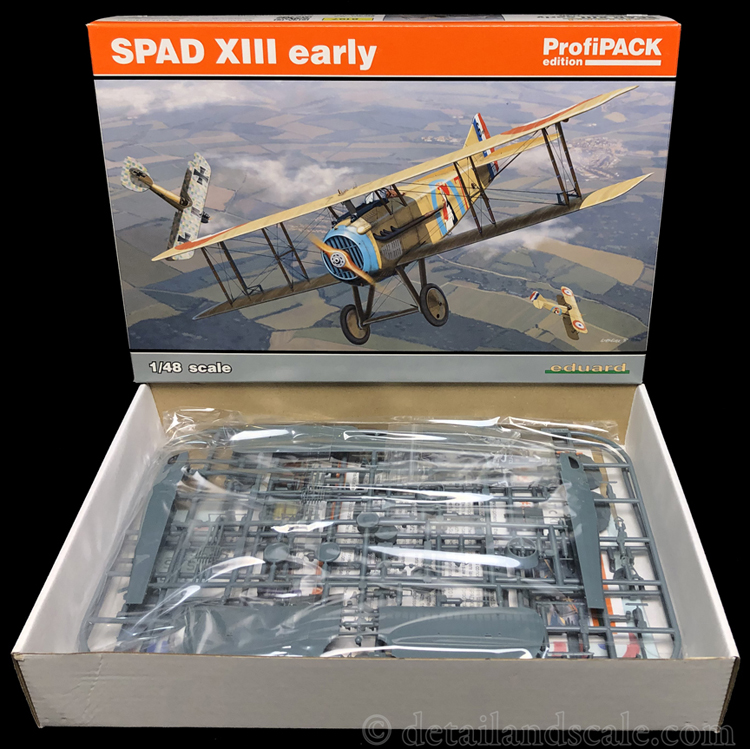 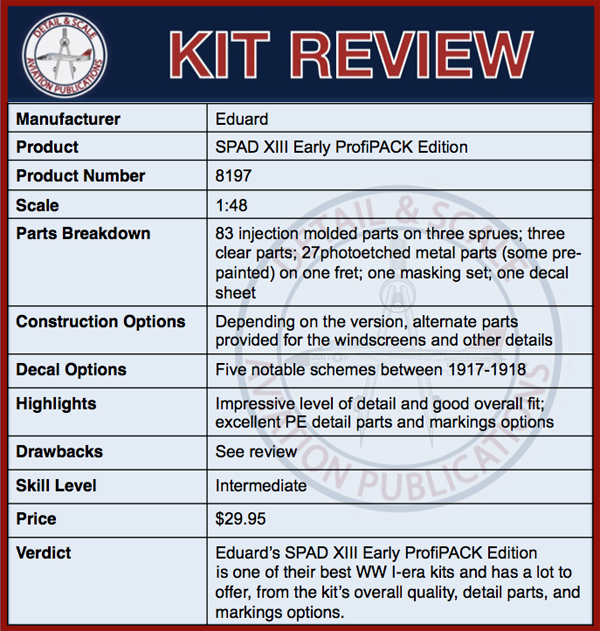 Of all the early warplanes that achieved fame during the First World War, the SPAD XIII was one of the most numerous and consequential aircraft of the late phases of the conflict – and which helped drive German airpower into defeat.  In this review, we examine Eduard’s most recent issue of their well-known 1:48 SPAD XIII, offered here in the form of a ProfiPACK edition representing the early SPAD XIII.

The SPAD XIII was a French-built, single engine biplane fighter aircraft developed by Société Pour L’Aviation et ses Dérivés, or SPAD.  It was an evolutionary development of the earlier and very successful SPAD VII.  In 1917, designer Louis Béchereau began work on a follow-on fighter for the SPAD VII that would field a powerful new geared version of the Hispano-Suiza 8A engine and would be fitted with a pair of .303 caliber machine guns.  The design resulted in one of the most capable and popular fighters of WW I.  Nearly 8,500 SPAD XIIIs had been produced before the end of hostilities.  An additional 10,000 airframes were still on order when the war ended, and those were never built.

The SPAD XIII was rapidly pressed into service.  Deliveries to front line squadrons started just one month following its maiden flight.  While manufacturing of the SPAD XIII was slower than anticipated, nearly every French fighter squadron eventually operated the aircraft.  The United States Army Air Service and British Royal Flying Corps also purchased these airplanes in large batches.  Numerous aces from various nations flew the SPAD XIII, including Capt. Eddie Rickenbacker who accumulated 26 kills.  Various Czech volunteers found themselves flying in the French Air Force and French foreign legion at the controls of the SPAD XIII as well.  The SPAD XIII remained in service until 1923.

Strengths:  I’ve long been a fan of Eduard’s range of World War I 1:48 scale aircraft kits, and their SPAD XIII is among my top two or three favorites.  The plastic first appeared in 2008 and has been issued in 10 different boxings so far.  The kit itself is fairly straightforward with a relatively low parts count.  The fit is quite good and surface detail is excellent, especially the ribbed wing, rudder, and elevator surfaces.  This includes nicely recessed panel lines and fasteners on the fuselage and engine cowling. Note that this version of the kit has the correct rounded wingtips characteristic of the early production SPAD XIIIs.  Later airframes had squared-off wingtips.

The cockpit is quite good for an injection molded kit, but the photoetched parts really add a wealth of detail and visually interesting features.  These include instrument dial faces, cockpit sidewall details, pre-painted pilot seat harnesses (complete with simulated stitching details), the aiming reticle, map holder, a tiny but recognizable pre-painted map part that goes in the map holder, and engine air inlet vents.

The kit windscreens (three optional versions are provided) all feature consistently excellent optical quality, and the pre-cut masking set will save a lot of time with the precise masking of the windscreen and the wheel hubs.  A diagram is provided to guide the rigging process, which is not too complex for the SPAD XIII.  On top of all of this, we’ve got some awesome marking options.  Each one is historically quite significant, but I am really drawn to options A and D.  The decals appear to have been printed in-house by Eduard, and they look great.  I can see no technical errors in printing.  It is nice work.

Weaknesses:  I cannot offer any substantive critiques of this kit, except that beyond the elevator, none of the other control surfaces are separate and positionable parts.  That is, of course, more of a personal preference and not really a strike against the kit.

Eduard’s SPAD XIII continues to impress, and this ProfiPACK edition of the early SPAD XIII is top notch.  The quality of photoetched metal parts, masking sets, and decals make this already very nice 1:48 scale biplane even more attractive.  Fans of World War I subject matter will really enjoy this issue of the kit.  Beyond that, the kit’s relative simplicity, high level of detail, and outstanding markings options make this an inviting project to a broad range of scale aircraft modelers.