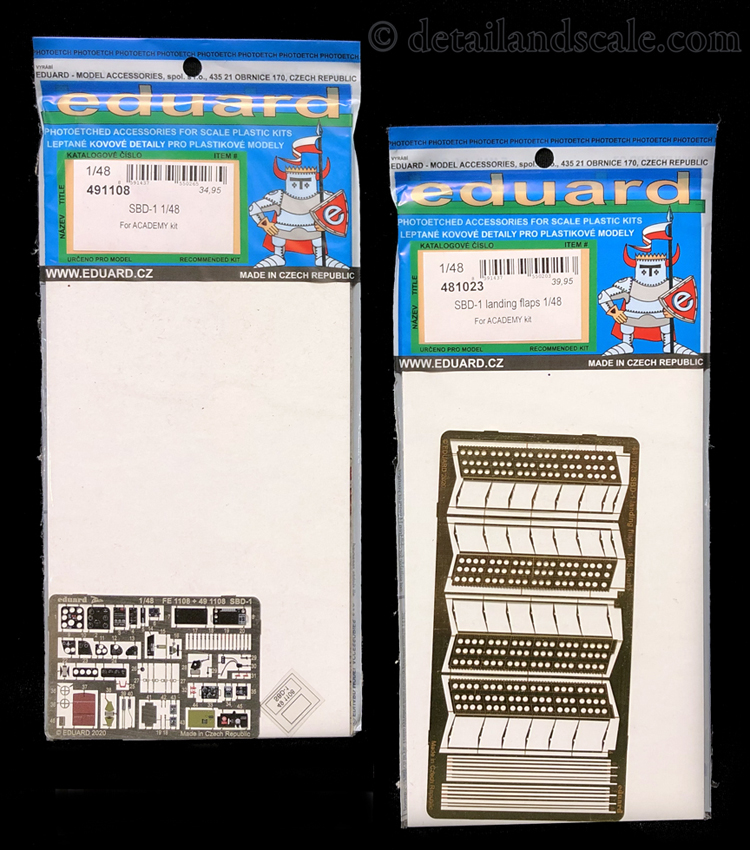 The Douglas SBD Dauntless was one of the most significant aircraft that flew and fought in Pacific skies during World War II.  SBDs helped shape the outcomes of key engagements in the in favor of the United States, such as the Battles of Midway and Coral Sea, and in Operation TORCH over North Africa.  In 1997, Accurate Miniatures began to release a series of now classic SBD kits in 1:48 scale.  While Accurate Miniatures is no longer in business, Academy bought some of their molds and these kits periodically reappear in Academy boxings.  Here, we take a look at two recent Eduard detail sets released for the Accurate Miniatures/Academy SBD-1.

First up:  SBD-1 Detail Set (# 491108; MSRP: $34.95).  This set contains one pre-painted photoetched metal fret containing 66 parts, a second, unpainted fret with 124 parts, and one clear acetate part used for the lower fuselage window.  This set is quite comprehensive, inside and out.  It provides a major detail upgrade for the front cockpit with highly detailed parts for the instrument panel, sidewalls, seat, a new throttle quadrant, trim wheel, and various handles, levers, and wiring.  The rear cockpit receives the same level of detail with a new radio set, sidewall details, and upgrades to the machine guns including a very finely made ring sight.  The set also features placards, tie-down rings, and other details for the main landing gear, and the main landing gear well walls.  Other parts provide engine cylinder wiring, the air scoop filter, and a major set of parts used to upgrade the 1,600-pound bomb carried on the centerline trapeze station.

Second:  SBD-1 Landing Flaps (# 481023; MSRP: $39.95) is a little mis-named, as on the SBD, these are really the aircraft’s highly distinctive perforated “dive flaps.”  The kit’s dive flaps are okay, but these can be even better represented, with yet finer detail, as photoetched metal parts.  This set contains two photoetched metal frets with 60 parts and the detail is both fine and beautiful.  The set represents a complete replacement for the kit’s outer and central dive flaps, along with detail parts for the flap driveshafts.  It is indeed a moderately intricate set.  Working with this set will require a little surgery to the kit and a good deal of shaping a number of the photoetched parts, but it is not at all onerous.  The end result will be quite stunning.

Overall, these two items are very impressive, providing a level of detail well beyond what the kit itself can provide.  Individually, each one is a winner, but used together, they will elevate the detail of the 1:48 scale Accurate Miniatures/Academy SBD-1 cockpit and dive flaps in very noticeable and important ways.