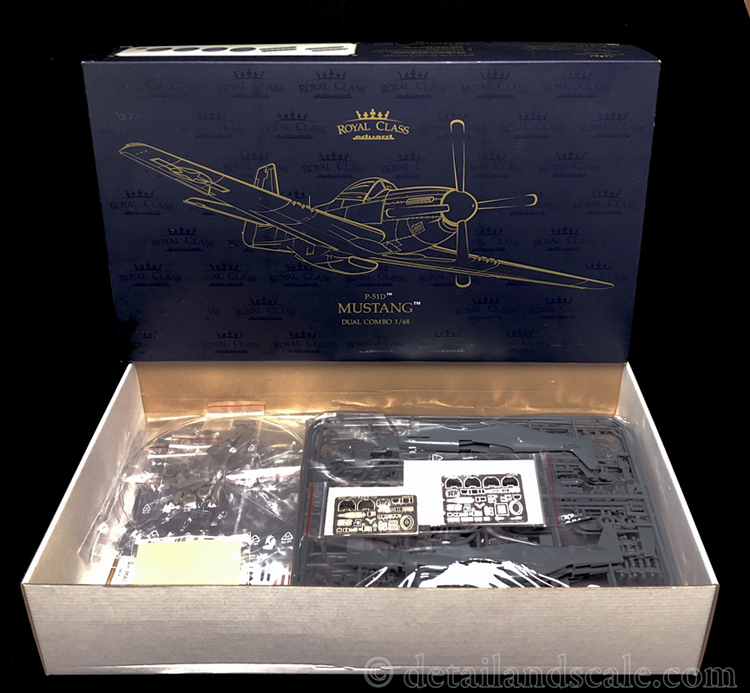 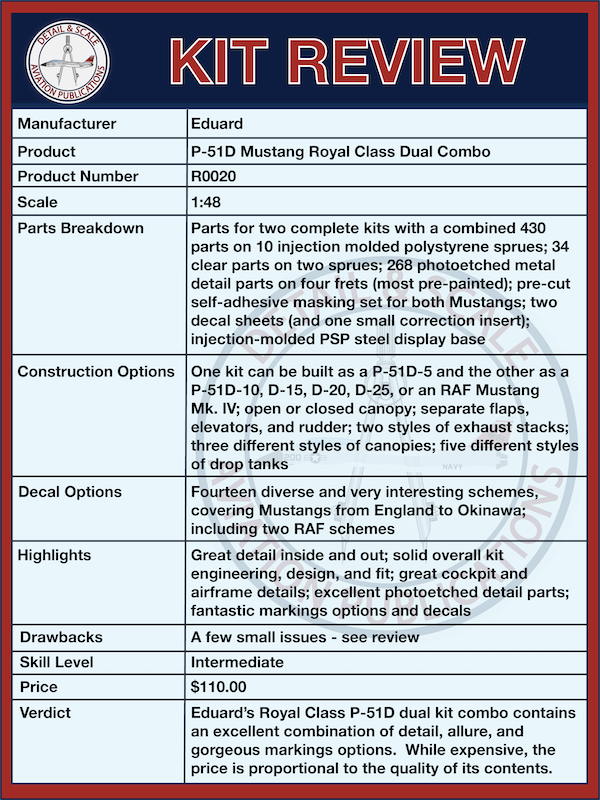 In 2019, Eduard released the first of a now growing family of P-51 Mustangs in 1:48 scale.  These are excellent kits.  Scale modelers did not have to wait long for the Royal Class edition of their new P-51D, and here, we take a look at this impressive deluxe kit set edition.

In 1940, the U.K. urgently sought a stopgap fighter to help hold the line against the Luftwaffe.  Great Britain’s Purchasing Commission approached North American Aviation to build Curtiss P-40s under license for the RAF.  Instead, North American pitched an alternative.  They would produce a new fighter that would be easier and faster to produce, and it would also outperform the P-40.  The British accepted the offer and placed an order for 340 of the new aircraft in March 1940.  A design team led by NAA’s president, James “Dutch” Kindelberger and lead engineer Edgar Schmued, got to work.  By September 9th, the prototype NA-73X airframe was rolled out.  It was a very rapid developmental process by any standard, even during the war.  A mere 102 days had passed between contract signature and roll-out.

The NA-73X first flew on 26 October.  It featured a revolutionary laminar flow airfoil wing derived from NACA flight test data along with an innovative under-fuselage ducted engine cooling system.  Mustangs were very fast, maneuverable, and well-armed.   Early versions entered production in May 1941 and went into combat with the RAF 11 months later.  These were powered by Allison engines and were typically equipped with two .50-calibre nose-mounted and four .30-calibre wing-mounted machine guns.  The 1,100hp Allison V-1710-39 powerplant provided impressive performance, but only up to about 15,000 feet.  The RAF’s Mustang Mark I and II were soon followed by the improved P-51As, Bs, and Cs operated by the USAAF and the RAF.  British experimentation with the Merlin powerplant’s supercharger provided for outstanding high-altitude performance, and by mid-1943, Packard-built Merlin engines became standard for new build P-51s.

The definitive P-51D variant was fitted with a Plexiglas bubble canopy providing excellent 360-degree visibility, and the aircraft could reach around 440 MPH while its service ceiling was just shy of 42,000 feet.  Armament consisted of six wing-mounted .50-calibre machine guns while underwing pylons permitted the use of range-extending drop tanks, along with rockets and bombs.  There were various production blocks and sub-variants of the P-51D.  The first 100 P-51D-1s went to Australia, and then the next 1,000 airframes were P-51D-5s.  The vertical stabilizer design of the P-51C was carried over, but in the new configuration, directional stability suffered.  The addition of a tail fillet at the front of the vertical stabilizer solved the problem.  The tail fillet became standard on the D-10 and all later production versions.

During WWII, the P-51 saw action in the European, North African, Mediterranean, and Pacific theaters.  Mustangs claimed 4,950 air-to-air kills.  In USAAF service, P-51Bs and Cs were used by the Eighth Air Force to escort bombers in raids over “Fortress Europe” beginning in 1943.  The P-51D took over that role by mid-1944.  Mustangs were used increasingly as ground attack aircraft as well.  By the start of the Korean War, the Mustang had been re-designated F-51 and it served as the front-line fighter until the F-84 and F-86 arrived on the scene.  The “Cadillac of the Skies” served with Air National Guard Units operated until 1957 and the last Mustang in USAF service was retired in 1978.  In foreign service, the Dominican Republic retired its last operational P-51 in 1984.  Today, a handful of P-51s still fly as warbirds with private owners.

Eduard’s 1:48 scale P-51D Royal Class Edition kit contains two complete Mustang kits.  One is a P-51D-5 (fuselage and tail parts on Sprue C) and the other a P-51D-10 and above (Sprue D).  Between the two of these, the box contains 430 parts on 10 injection molded polystyrene sprues.  Thirty-four clear parts come on two sprues.  There are four sets of photoetched metal detail parts totaling 268 parts (most of them are pre-painted).  There’s also a pre-cut self-adhesive masking set for both Mustangs, one primary decal sheet, one set of national insignias and stencils, and one small decal correction insert.  An injection-molded display base is also provided.  The full color instruction booklet organizes the build over 15 pages.  Markings for 14 airplanes include:

Strengths:  We’ve recently reviewed a few separate issues of the Eduard 1:48 scale Mustang (which you can find here).  First, let’s look at what’s in this Royal Class edition, and then we will recap our observations on the Eduard P-51 itself.

The Royal Class edition contains two kits – one is P-51D-5.  The other can built as a D-10, D-15, D-20, D-25, or an RAF Mustang Mk. IV.  The big difference there involves the presence of the tail fillet in the Block 10 and higher-numbered production blocks, along with lots of little subtle differences involving particular combinations of antennas, canopy styles, rear view mirrors, gunsights, instrument panels, exhaust stacks, and so forth.  As a Royal Class edition, the kit contains a ton of photoetched metal details (enough for two P-51D-5s or two P-51D-10+s, and you are covered for whatever combination of block number builds you might do).

An assortment of cast resin details spanning two different styles of main wheels/tires, tail wheels, and a set of shrouded and unshrouded exhaust stacks.  The cast resin wheels are particularly gorgeous in terms of their detail and casting.  Eduard has produced multiple Brassin sets consisting of several different P-51 wheels with different tire treads. Whatever two sets of cast resin wheels you have in the box was randomly selected from the larger pool of resin wheel sets in a “grab-bag” style just for your box.  A large pre-cut self-adhesive masking set provides masks for two sets of windscreens, canopies, and wheel hubs.  An injection-molded display base is provided in the form of a PSP (pierced steel plate) surface.  A new Sprue J is included here and has parts for two styles of long-range drop tanks.

If all that fails to entice, the decals and markings options alone could be considered worth the price of admission, so to speak.  There are 14 different options that span from England to Iwo Jima.  Each one is interesting, attractive, historic, and eye-catching.  Have fun trying to choose just two.  The primary decal sheet is physically huge.  A very comprehensive airframe stencil set for two Mustangs accompanies the big sheet.  All the decals appear to have been printed in-house by Eduard, and they look excellent.

Bottom line:  as Royal Class kit editions go, you’ve got great stuff to work with and enjoy here.  It is exciting, and Mustang fans can really rejoice with this one.

Regarding the kits themselves:  Exterior surface detail is exceptional.  Eduard has nailed the relatively featureless wing surfaces while the rivet/fastener details on the fuselage and tail surfaces are as exquisite as they are sublime.  I also test fit the fuselage halves and wings.  In a word, basic fit appears airtight.  The only fit that seems not virtually seamless involves the upper wing roots.  It looks a just little fiddly, but I suspect that when all the assemblies come together, the fit should be far more stable and precise.

Eduard’s P-51Ds have a number of building options, including an open or closed canopy, separate landing flaps, ailerons, rudders, elevators, and radiator exhaust.  The cockpit on its own is very impressive, with separate frames for the sidewalls, a multi-part seat, and excellent representations of the radio, battery, and fuel tank, down the separate parts for the wiring and fuel line.  The really impressive elements here are the photoetched parts which add a great deal of detail and visually interesting features to the cockpit, such as the pre-painted instrument dial faces, the gorgeous pre-painted harnesses (complete with simulated stitching details), various placards, and the photoetched throttles, trim wheel, and other parts.

The main gear well builds up from about 16 parts, and it is very rich with detail, from the textures of the parts and ribs to the fuel lines and pump details.  All that’s missing are the smaller hydraulic and electrical lines, and the builder can add those relatively easily if they wish.  There’s also a fully enclosed tail wheel well that looks great.  Another nice feature is a single-piece gun port insert on each wing.  Unlike the Tamiya kit, for example, the gun barrels do not assemble out of upper and lower halves resulting in some tricky seam work.  Eduard’s engineering approach is excellent.  Also note that on the interior of the wings, there’s a blanking plate on the inside of each wing so that shell ejection ports do not open up into the deep, hollow inside of the wing for all to see.

The masking set will save a lot of time with masking the wheel hubs and clear parts.  The clear parts look fantastic, and the windscreen has an extended fairing around it so gluing, masking, and painting will be a very low-risk affair to the clear parts there.

Weaknesses:  I cannot offer any substantive critiques of this kit.  I do love the Eduard beer glasses that are sometimes packaged in past Royal Class editions of other kits, but here, all we get is a PSP plastic display base.  One minor issue for some folks is that if PE parts aren’t your cup of tea, the detail on the pilot’s instrument panel is really minimal.  The idea is to either use the PE parts or kit supplied instrument panel decals.  Detail painters have little to work with.  Note that if you want to position the ailerons, rudder, and elevators in anything but the neutral position, you’ll need to remove their mounting tabs.  Also be really careful with the thin plastic strip that separates the left and right wheel wells on the lower wing half (Part B-15).  It is pretty fragile, and in some kits, it is warped/bent inward because it is so fine.  My sample is unaffected by this issue, but if that’s a problem in the kit you have, just note it will go back to its proper shape when the gear well assembly is fitted.

Eduard has produced a great Royal Class edition of their P-51D Mustang kit.  It is an excellent combination of detail, allure, and gorgeous markings options.  It is expensive, but the price is proportionate to the quality inside the box.  And of course, you can always add more detail, and Eduard has already released a range of aftermarket superdetail sets, from cockpits to gun bays, props, brass landing gear, and more.  Also, to my knowledge, there have been two production runs of the Eduard P-51D Royal Class. The first one sold out in days, and the second run is the last planned production of this boxing.  Especially if you are a P-51 fan, do yourself a favor and grab this Royal Class edition while you can.