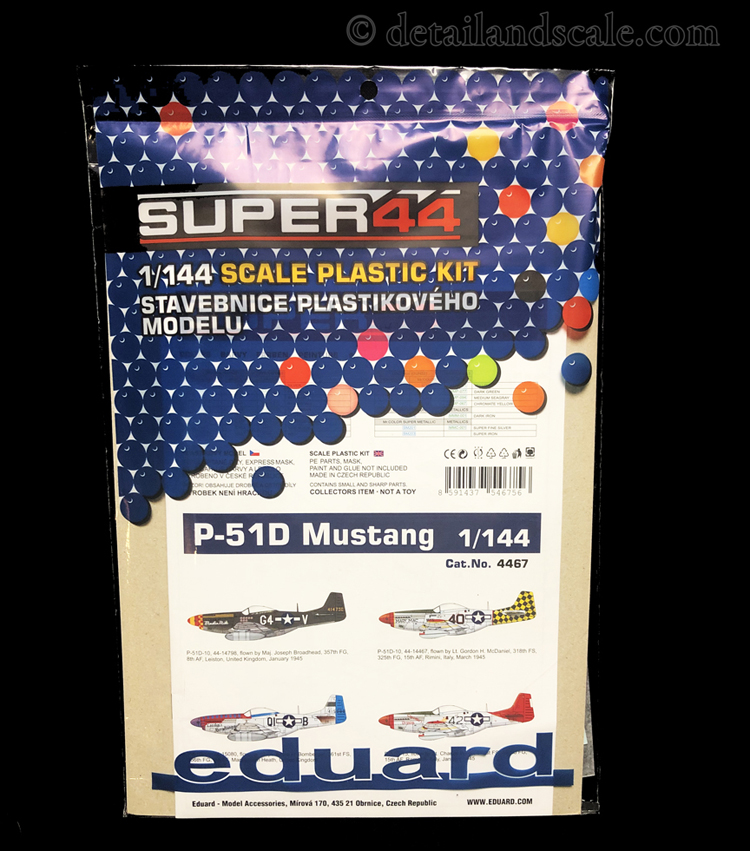 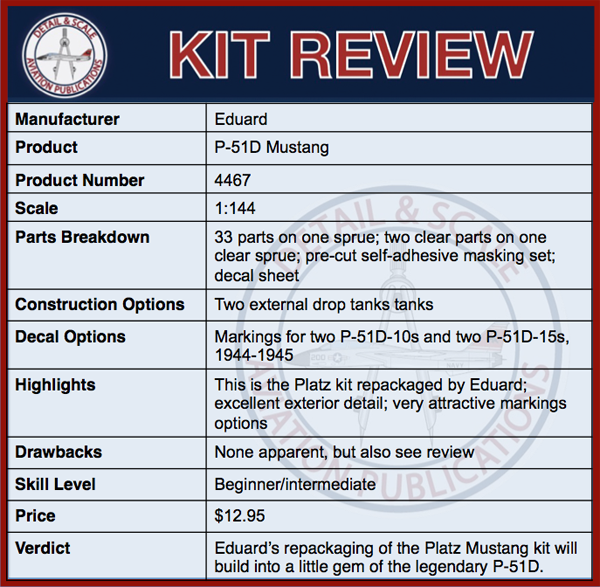 Hundreds of P-51 Mustang kits have been produced over the decades, from 1:24 to 1:144 scale.  Eduard recently released a P-51D in their SUPER44 product line, which is a repacking of the Platz kit from Japan.  It just might be the best of the littlest Mustangs out there.  Let’s check it out.

The origins of the P-51 began in early 1940.  Great Britain’s Purchasing Commission, interested in acquiring Curtiss P-40s, approached North American Aviation to build them under license for the RAF.  Instead, North American pitched an alternative consisting of a completely new fighter that would outperform the P-40.  The British accepted the offer and placed an order for 340 of the new aircraft in March 1940.  On September 9th, the NA-73X was rolled out 102 days after contract signature.

Early Mustangs entered production in May 1941 and went into combat with the RAF 11 months later.  These were powered by Allison engines and were typically equipped with two .50-calibre nose-mounted and four .30-calibre wing-mounted machine guns.  RAF Mustang Marks I and II were soon followed by the improved P-51As, Bs, and Cs operated by the USAAF and the RAF.  British experimentation with the supercharged Merlin powerplant provided for outstanding high-altitude performance, and by mid-1943, Packard-built Merlin engines became standard for new build P-51s.

During WWII, P-51s saw action in the European, North African, Mediterranean, and Pacific theaters.  Mustangs claimed 4,950 air-to-air kills.  In USAAF service, P-51s, with their very long range, escorted bomber formations over Europe beginning in 1943 and as ground attack and close air support aircraft following D-Day.  The definitive P-51D was fitted with a Plexiglas bubble canopy providing excellent 360-degree visibility, and the aircraft could reach around 440 MPH while its service ceiling was just shy of 42,000 feet.

By the start of the Korean War, the Mustang had been re-designated as the F-51 and it served as the front-line fighter until the F-84 and F-86 arrived on the scene.  The “Cadillac of the Skies” served with Air National Guard Units until 1957 and the last Mustang in USAF service was retired in 1978.  In foreign service, the Dominican Republic retired its last operational P-51 in 1984.  Today, a handful of P-51s still fly as warbirds with private owners.

Eduard’s SUPER44 release of the 1:144 scale P-51D consists of 33 injection molded parts on one sprue and two clear parts on one clear sprue.  The decal sheet covers the following four airframes:

Strengths:  Eduard’s small-scale Mustang is another entry in their SUPER44 product line.  The plastic itself comes from Japanese kit manufacturer Platz, and it’s excellent.  Platz does great work, especially in this scale.  The surface details are rich and complex even for 1:144 scale, and all the panel lines are very delicately recessed.  There is a rudimentary cockpit (pilot’s seat, radio and battery set).  The single-piece windscreen and canopy also look quite nice, and Eduard’s masking set is a very nice touch.  Shoulder harnesses and lap belts are provided as decals.  Molding of fine details here is excellent, from the separate exhaust stacks to the gear well doors, wheel hubs, and radiator intake.  Underwing stores are provided in the form of two drop tanks.

The markings options are all quite interesting and include iconic P-51Ds such as “Mary Mac” and “Creamer’s Dream.”  The decals were printed in-house by Eduard.  They look great from a printing and decal production perspective.  I can see no perceptible flaws.

Weaknesses:  I cannot offer any substantive critiques of this kit for what it is.  For those wanting more cockpit detail, Eduard # 144011 provides a complete photoetched metal cockpit, along with other details.

The Platz P-51D sees new life in Eduard’s 1:144 scale SUPER44 edition.  It’s simple, straightforward, and very appealing, even to someone like me (primarily a large-scale jet modeler).  Fans of 1:144 scale will really find a lot here to enjoy, and this little kit further extends an invitation to a wider range of scale modelers who will enjoy its engineering, accuracy, and level of detail – especially if you’re looking for something a bit different.