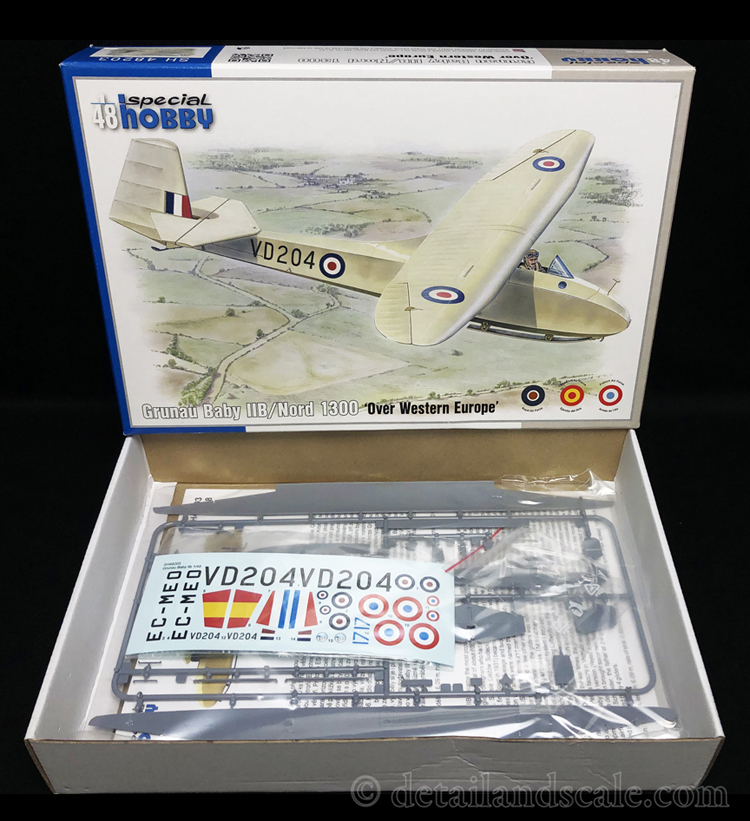 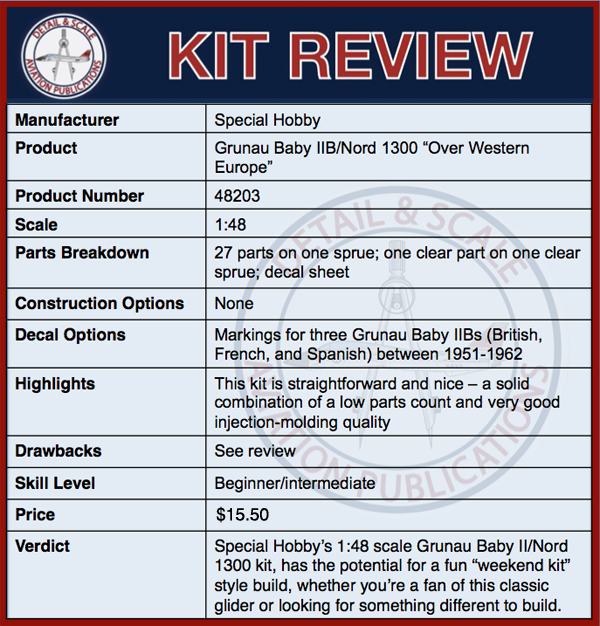 One of the more popular gliders produced during the 20th Century was the Grunau Baby, the first of which appeared before WWII and flew on long after.  As is often the case, Special Hobby has gone where few injection molded kit manufactures fail to tread and have produced a 1:48 scale kit of the Grunau Baby/Nord 1300.  Let’s see what we’ve got.

The Grunau Baby was a single-seat sailplane designed by Edmund Schneider, Wolf Hirth, and Hugo Kromer.  In 1931, the trio envisioned a basic and reliable glider with an elliptical wing that could be used for sport flying and pilot training.  It was named after Grunau, the town where Schneider’s factory was located.  The Baby was a high-wing braced monoplane with a hexagonal fuselage cross-section and an open cockpit.  The tail, wingtips, and leading edges of the wings up to the main spar were covered with plywood.

The Baby was an immediate hit with pilots, and it was publically promoted by gliding champion Wolf Hirth. An extensive redesign was undertaken in 1932 following the fatal crash of an unrelated Schneider design, and this became the Baby II.  This version, and the definitive Baby IIB that followed, were adopted as standard sailplane trainers for the German Air Sports Association (and which became the National Socialist Flyers Corps).

The Grunau Baby was relatively easy to build from plans.  It flew well, and the aircraft was strong enough to handle a range of aerobatic maneuvers. Accordingly, the Baby had a prodigious production run, with 6,000+ airframes constructed in about 20 countries such as Great Britain, the Netherlands, Czechoslovakia, Brazil, and elsewhere.  It was manufactured in France as the Nord 1300.  Production kept going after the war as Edmund Schneider, who took up residence in Australia, later developed the Baby 3 and Baby 4.

Strengths: This kit is both simple and quite nice.  It is simple because the Grunau Baby was a simple glider, and nice due to its overall quality.  The parts breakdown is very straightforward with left and right fuselage halves and upper and lower wing halves.  Another nice feature is the windscreen with the extended fairing, which should make gluing, masking, and painting an easier task.  The surface details are also well done – smooth, stretched fabric where it should be, and raised and recessed rib details where they belong.  Ailerons are separate parts and can be positioned as one might wish with just a little bit of work altering the mounting tabs.

The choice in paint schemes here are all similar (they are all tan) but each captures some interesting color and marking variations between the U.K., French, and Spanish markings options.  I’d argue that each one is attractive for the subject matter.  The decals appear to have been printed in-house, and look great from a technical point of view considering colors, register, print quality, and thin, restrained carrier film.

Weaknesses:  There’s very little to critique here.  The only thing that I might nitpick is that there is the lack of any details for the three very small cockpit dials (I assume airspeed, altitude, and an artificial horizon).  Detail painters can take care of that, and for the rest of us, several manufactures (or even our spares bin) provide dial decals that can be used here.

Special Hobby’s 1:48 scale Grunau Baby II/Nord 1300 kit, while simple and featuring a low parts count, has clear potential.  It receives strong marks in overall quality, design and parts breakdown, detail, and decals/paint schemes.  It holds the promise for a fun “weekend kit” style build, whether you’re a fan of this classic glider or looking for something different to build.

Sincere thanks are owed to Special Hobby for the review sample. You visit them on the web at http://www.specialhobby.info and on Facebook at https://www.facebook.com/specialhobby.