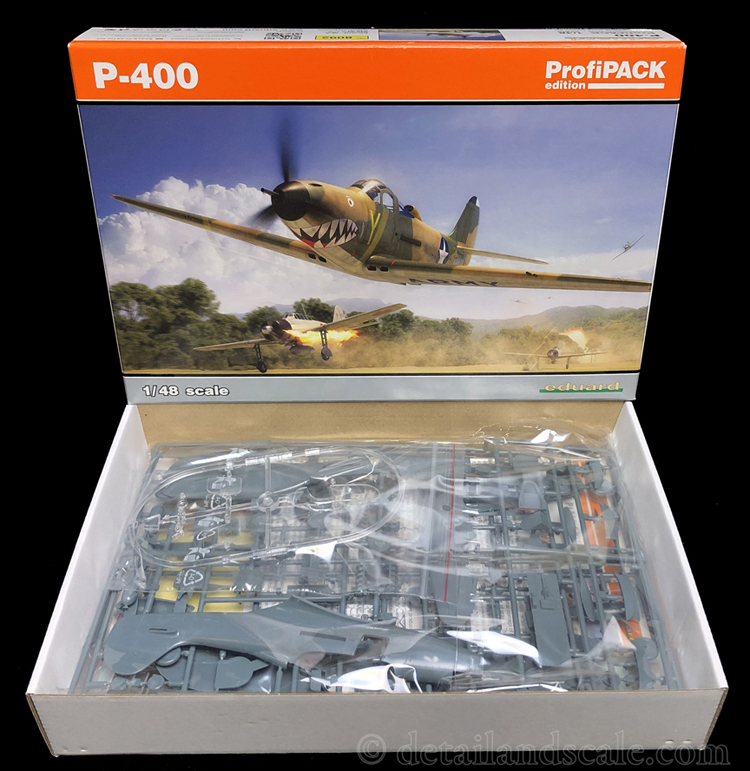 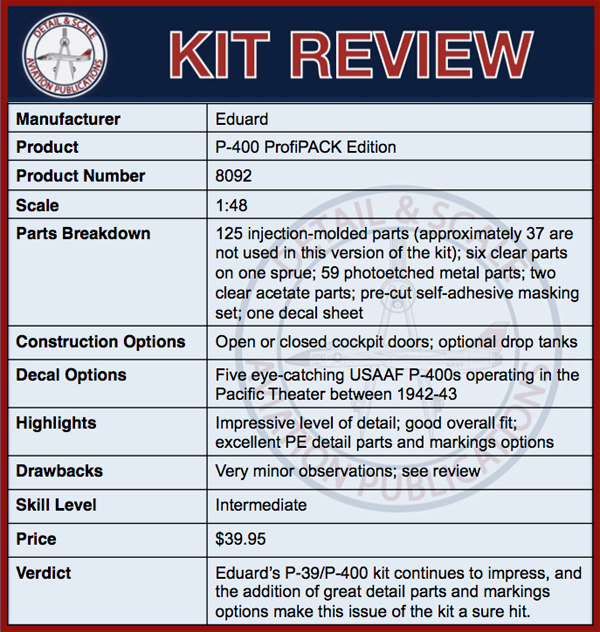 One of the most advanced fighter plane designs of the late 1930s was the Bell P-39 Airacobra.  P-39s served late into the Second World War, holding its own against many later designs and serving with multiple Allied air forces and in all theaters of operation.  The P-400 was an export version of the P-39, and here we take a look at Eduard’s recent issue of their 1:48 scale P-400 ProfiPACK edition.

The story of the P-400 began with the XP-39 prototype, which originated from a 1937 United States Army Air Corps specification for a new, single engine high-altitude fighter.  Bell Aircraft responded with a unique and innovate proposal – an aircraft featuring a bullet-like, streamlined nose, an Allison V-12 engine mounted in the mid-fuselage behind the cockpit, and a 37 mm Oldsmobile T9 cannon that would fire through the propeller hub.  The design also featured distinctive “car doors” providing access to the cockpit and a tricycle landing gear configuration which was relatively rare for its day.  The fuselage structure featuring a rugged central keel that incorporated the cannon, cockpit, and engine.  Two strong fuselage beams to port and starboard formed the basis of the structure

The XP-39 made its maiden flight in April 1938 at Wright Field in Dayton, Ohio.  While the XP-39 was both fast and demonstrated exemplary climb performance, its development process involved lots of fine tuning to its engineering to coax out better performance, maneuverability, and speed, especially above 20,000 feet.  Yet, a turbocharger was never fitted, and its single-speed supercharger meant that its performance really fell off anywhere above 17,000 feet.  Guns were added in the wings, and depending on the production model, wing armament fits would usually involve combinations of .50 and .30 caliber machine guns.

As with many cases including the P-51, Great Britain was the first to order and operate P-39s in quantity, though they only filled the ranks of one squadron.  RAF evaluations found that Hurricane and Spitfire outclassed the P-39, and only four RAF Airacobras saw action in the Battle of Dunkirk attacking German barges.  In the Pacific, USAAF P-39s fought over Guadalcanal, and at lower altitudes, generally demonstrated parity with the feared Zero.  The Red Air Force were perhaps the most notable P-39 operator of WWII.

The P-400 was an export version of the P-39D, destined for Great Britain. The P-400 (the designation referencing its top speed of 400 MPH+) first emerged as an export version to France in early 1940.  When France fell, Great Britain took over the order.  The P-400 was armed with one Hispano-Suiza Mk 404 (M1) 20mm cannon in the nose and four .303 caliber machine guns in the wings.  Its enthusiastic reception was soon tempered by realization of the P-400’s high altitude performance limitations.  While the entire production run of 675 P-400s was still completed, some 200 aircraft were transferred from Britain to the Soviet Union.  The remaining 180 or so P-400s were received by the USAAF and found their way into the Pacific Theater and took part, quite notably, in the battles for control of New Guinea and Guadalcanal.

Eduard’s 1:48 scale P-400 ProfiPACK Edition kit comes on three injection molded polystyrene sprues containing 125 parts (approximately 37 are not used in this version of the kit), six clear parts on one sprue, 59 photoetched metal parts included on one fret (20 of which are pre-painted), two clear acetate parts, a pre-cut self-adhesive masking set, and one decal sheet.  The full color instruction booklet guides the build over 15 pages.  Markings for five airplanes are included:

Strengths:  Eduard’s 1:48 scale P-39s have been on the market for two decades, forming a large family of releases and boxings since 2000.  Parts for the P-400 have always been on the sprues and get used here.

The kit itself has stood the test of time.  The plastic parts fit very well, engineering is straightforward and relatively uncomplicated, and the detail (especially exterior recessed panel lines, rivets, and fasteners) is great, even considering today’s standards.  In short, the Eduard 1:48 scale P-39/P-400 really has earned a strong reputation among scale modelers.  Still, it may not be flawless (see below).

Beyond the excellent exterior surface detail, another really impressive element of this ProfiPACK kit involves the comprehensive set of pre-painted photoetched metal details for the cockpit.  The fidelity of the pre-painting is at Eduard’s typical high level, from the instrument faces with the additional raised glass effects to stitching and shading on the seatbelts.  The unpainted fret includes parts for radiator grills, cockpit door details, wiring, and various external airframe details.  I swear by Eduard pre-cut self-adhesive masks, and they will save a lot of time and provide precision masking of the windscreen and canopy.  As another nice touch, masks for the upper wing walkways are also provided.  Decals are fine for wing walkways, but painting them is often better, and Eduard’s masks are ideal for this purpose.

The markings options are straight-up awesome.  All of the choices are outstanding for the scale modeler, and include many variations involving paint schemes, unit markings, and so forth.  You will have a hard choice figuring out which schemes to do.  Three are fantastic shark-mouth schemes the other two feature very cool nose art.  The decals themselves were printed in-house by Eduard, and they all look awesome.  I can see no technical errors in printing in any respect.  The decal sheet contains a thoroughly comprehensive set of airframe stencils as well.

Weaknesses:  I cannot offer any substantive critiques of this kit, apart from the fact that none of the control surfaces are separate or positionable apart from the rudder.  I am actually quite eager to build it in the near future.  However, there is probably a bit of a shape error, where the leading edges of the wings are a bit too thick.  It is not terribly egregious though, and many scale modelers will not likely find the issue as a show-stopper.

Eduard has done a great job with their P-400 kit, and the extra elements contained in this ProfiPACK edition really make it shine.  Enjoy!

Sincere thanks are owed to Eduard for the review sample.  You can visit them on the web at http://www.eduard.com and on Facebook at https://www.facebook.com/EduardCompany .  Ben Pluth helped with contributed observations about the kit as well.