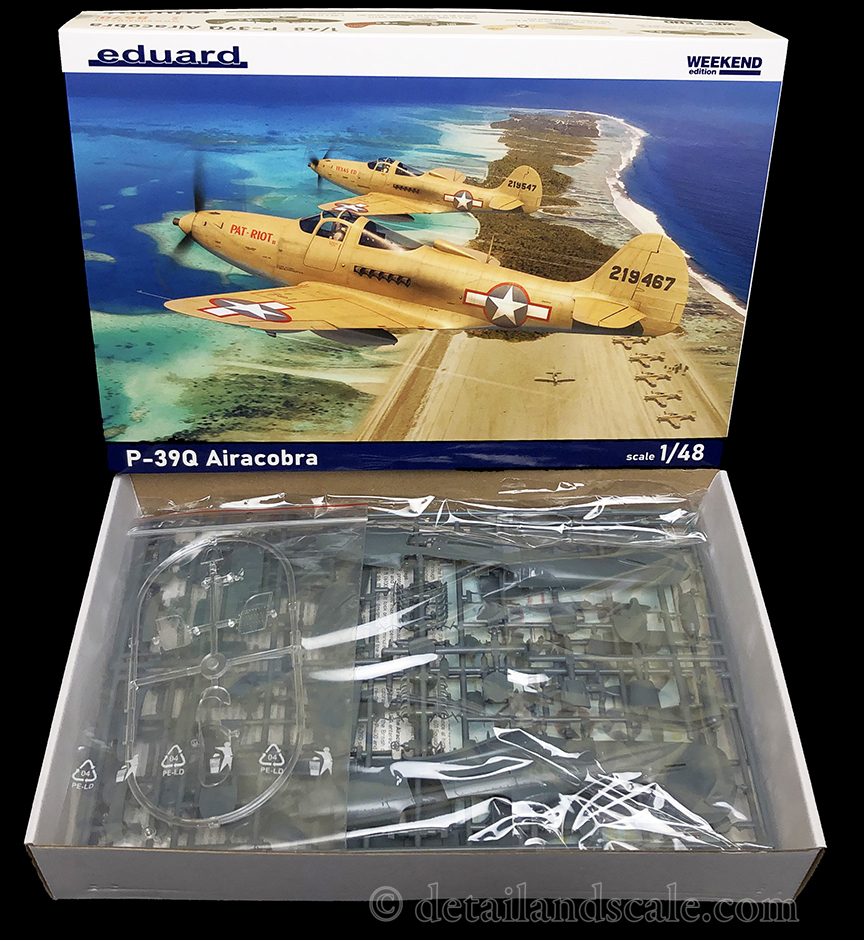 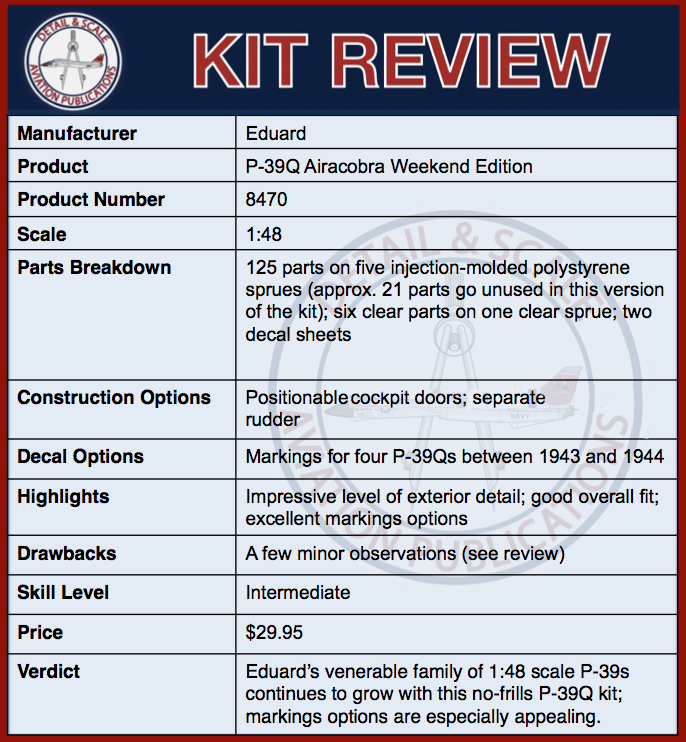 One of the most advanced fighter plane designs of the late 1930s was the Bell P-39 Airacobra.  P-39s served late into the Second World War, holding its own against many later designs and serving primarily as a ground attack aircraft with multiple Allied air forces and in all theaters of operation.  In this review, we sit down with a recent issue Eduard’s rather venerable 1:48 scale P-39Q in a Weekend Edition boxing.

The Airacobra story began with the XP-39 prototype, which originated from a 1937 United States Army Air Corps specification for a new, single engine high-altitude fighter.  Bell Aircraft responded with a unique and innovate proposal – an aircraft featuring a bullet-like, streamlined nose, an Allison V-12 engine mounted in the mid-fuselage behind the cockpit, and a 37mm Oldsmobile T9 cannon that would fire through the propeller hub.  The design also featured distinctive “car doors” providing cockpit access and a tricycle landing gear configuration which was relatively rare for its day.

The XP-39 made its maiden flight in April 1938 at Wright Field in Dayton, Ohio.  Its development process involved extensive fine tuning to coax out better performance, maneuverability, and speed, especially above 20,000 feet.  Great Britain was the first to order and operate P-39s in quantity, and four RAF Airacobras saw action in the Battle of Dunkirk. In the Pacific, USAAF P-39s fought over Guadalcanal, and at lower altitudes, they demonstrated relative parity with the Zero.  The Soviet Air Force was the most notable P-39 operator of WWII.

There were many different variants of the Airacobra, but the P-39Q was the definitive production version, with the final airframe rolling off the line in August 1944.  The P-39Q was fitted with a 1,420 hp Allison V-1710-85 engine.  It was armed with one 37mm cannon that fired that through the propeller hub, two .50 caliber machine guns that fired through the propeller arc, and two wing-mounted .50 caliber machine guns.  The P-39Q could reach speeds just shy of 400 MPH at 15,000 feet, and it had a range of 650 miles.  A total of 3,788 P-39Qs were built over 13 separate production blocks.

Eduard’s Weekend Edition 1:48 scale P-39Q kit comes on four injection molded polystyrene sprues containing 125 parts (approximately 21 are not used in this version of the kit), and six clear parts on one sprue. The full color instruction booklet guides the build over 12 pages.  Markings for four airplanes are included:

Strengths:  Eduard’s 1:48 scale P-39s have been on the market for two decades, forming a large family of releases and boxings since 2000.  Good news: the kit stands up to the test of time.  It is generally quite accurate.  The plastic parts fit very well, engineering is straightforward and relatively uncomplicated, and the detail (especially exterior recessed panel lines, rivets, and fasteners) is great, even considering today’s standards.  The clear parts are flawless.  In short, the Eduard 1:48 scale P-39 really has earned a very strong reputation among scale modelers for being both accurate and enjoyable to build.  Still, it may not be perfect (see below).

The markings options are a true highlight of this boxing.  Historically, Eduard usually includes markings for two airplanes in their Weekend Edition kits, but here there are four. All of the choices are outstanding for the scale modeler.  In carefully studying the markings guides, I want to build them all.  “Gooseneck,” with its red tail and skull nose art is especially appealing, just as is the white-tailed “Snooks” and the sand-over-light blue scheme seen on “Pat-Riot.”  Truly, most builders will have a hard choice figuring out which schemes to do.  The decals themselves were printed in-house by Eduard and are of the new wet-transfer style.  I can see no technical errors in printing in any respect.

Weaknesses:  With all of the good things about this kit, there are at least a few observations.  Out of the box, the kit cockpit is fundamentally okay, but for many scale modelers, it may be under-detailed for their tastes, especially if the cockpit doors are positioned open.  As a Weekend Edition kit, only decals are provided for the instrument panel and seatbelts.  For some scale modelers, that’s perfectly fine, but for me, that’s not my preference.  This issue is effortlessly rectified with any one of a variety of cockpit upgrade details sets that are available (see below).  Back to the kit: note that apart from the rudder, none of the control surfaces are separate or positionable.  There is also probably a bit of a shape error involving the leading edges of the wings being a bit too thick.  It is not terribly egregious though, and many scale modelers will not find the issue as a so-called “fatal flaw.”

Eduard continues to find new life in their 20-year-old tooling of their 1:48 scale P-39.  As a Weekend Edition kit, this is relatively no-frills issue of the P-39Q, and it is conducive to a relatively quick build.  Still, for many scale modelers, the cockpit especially calls out for some further detail work, and that can be accomplished with PE, cast resin, and 3D-printed parts available from Eduard.  We will have reviews of those sets shortly here at detailandscale.com. Stay tuned, and happy building!