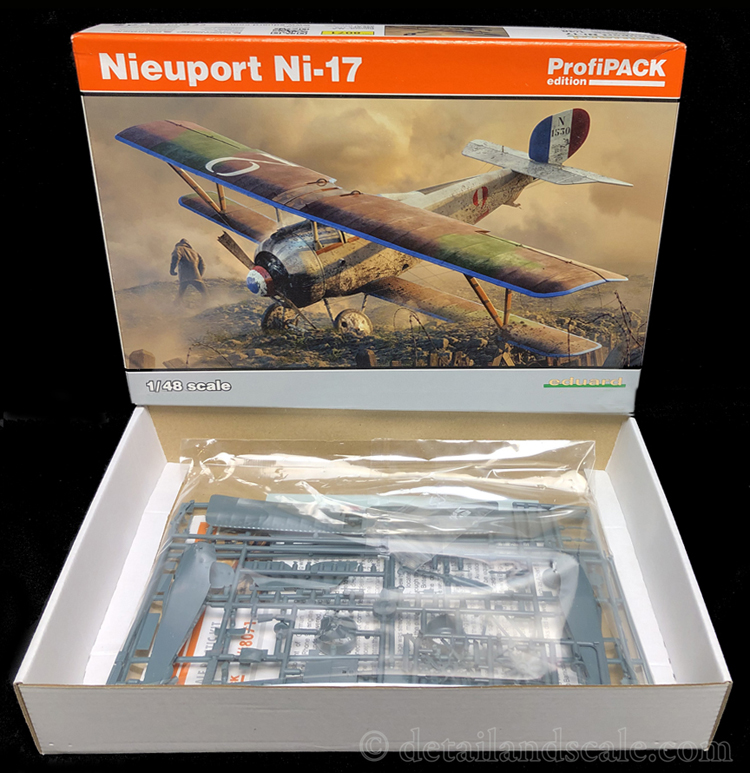 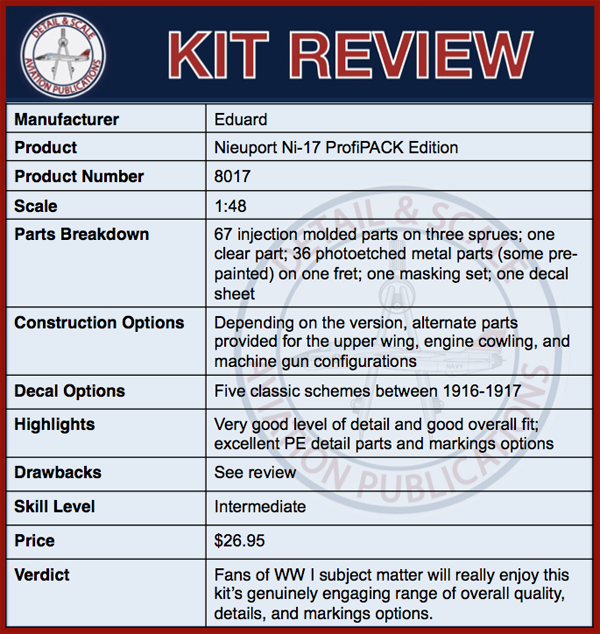 The First World War drove a rapid progression of aviation technology with faster, more capable, and more advanced aircraft being developed at an unprecedented pace.  One of the most famous fighters of this era was the French Nieuport Ni-17.  Renowned for its excellent maneuverability and rate of climb, many regarded the Ni-17 as the best pursuit plane of its day.  Here, we take a look at Eduard’s most recent issue of their 1:48 Ni-17 kit in a ProfiPACK edition.

Just 13 years after the first flight of the Wright Brothers in 1903, far more advanced designs had emerged in the shadow of the Great War.  The Ni-17 was an evolutionary development of the Ni-10, Ni-11, and Ni-16. It was designed by Gustave Delage who served as the chief designer of the French Nieuport aircraft company.  Compared to the Ni-16, the larger and more refined Ni-17 was fitted with the 110 hp Le Rhône 9J engine.  The Ni-17, like its predecessors in its design lineage, was a sesquiplane, featuring a larger upper wing and a smaller lower wing.  Fuselage and wing structures were fashioned from ashwood and limewood, while control surfaces had welded steel tube structures.  The Ni-17 also featured the new Alkan-Hamy synchronization gear that permitted firing through the propeller arc.

By March 1916, the Ni-17 had reached the front lines and was key in ending the “Fokker Scourge” of 1915.  By early 1917, the Ni-17 equipped every fighter squadron of the Aéronautique Militaire and was the mount of nearly all of the top-scoring French aces.  The Royal Flying Corps, Royal Naval Air Service, Imperial Russian Air Service, and the Americans of the Escadrille Lafayette all flew the Ni-17.  Many pilots achieved ace status in the Ni-17.    Yet, by the middle of 1917, the Ni-17 had become obsolete, outclassed by the German Albatros D.III and the SPAD S.VII and SE. 5.  Withdrawn from combat at that point, the Ni-17 became a popular advanced trainer and flew on into the 1920s.

Eduard’s 1:48 scale Nieuport Ni-17 ProfiPACK Edition kit comes on three injection molded polystyrene sprues containing 67 parts, one clear part, and 36 photoetched metal parts included on one fret (three of which are pre-painted). The parts are accompanied by a pre-cut self-adhesive masking set and one decal sheet.  The full color instruction booklet guides the build over 12 pages. Markings for 5 airplanes are included:

Strengths:  This 1:48 scale Ni-17 is based on an older mold by Eduard that first hit the streets in 1998 and later upgraded in 2002, but its still quite impressive. Eduard did good work back then, too.  The kit itself is fairly straightforward with a low parts count. I find it to be accurate. The fit is quite good and surface detail is excellent. This includes nicely recessed panel lines on the fuselage, and depending on the version of Ni-17, there are alternate parts for the upper wing, engine cowling, and machine gun configurations.  It’s all covered here.

The kit windscreen features excellent optical quality, and the pre-cut masking set will save a lot of time with the precise masking of the windscreen and the wheel hubs.  A rigging diagram is also provided.  For the Ni-17, the rigging is pretty simple.  On top of all of this, the kit contains great markings options.  They are all outstanding choices.  Like me, you’ll have a hard choice figuring out which scheme to do.  Each one is historically quite significant, but I am really drawn to options A and D.  The decals appear to have been printed in-house by Eduard, and they all look great. I can see no technical errors in printing.

Weaknesses: I cannot offer any substantive critiques of this kit, apart from the fact that none of the control surfaces are separate or positionable apart from the rudder.  I actually quite eager to build it in the near future.

Eduard continues to do very well with their 1998-era Nieuport Ni-17 molds, and here, they are combined with the best of modern-quality photoetched metal parts, masking sets, and decals. Fans of WWI subject matter will really enjoy this issue of the kit. Moreover, this kit extends an invitation to a wide range of scale modelers, owing to its virtues that span relative simplicity, very good detail, and outstanding markings options.