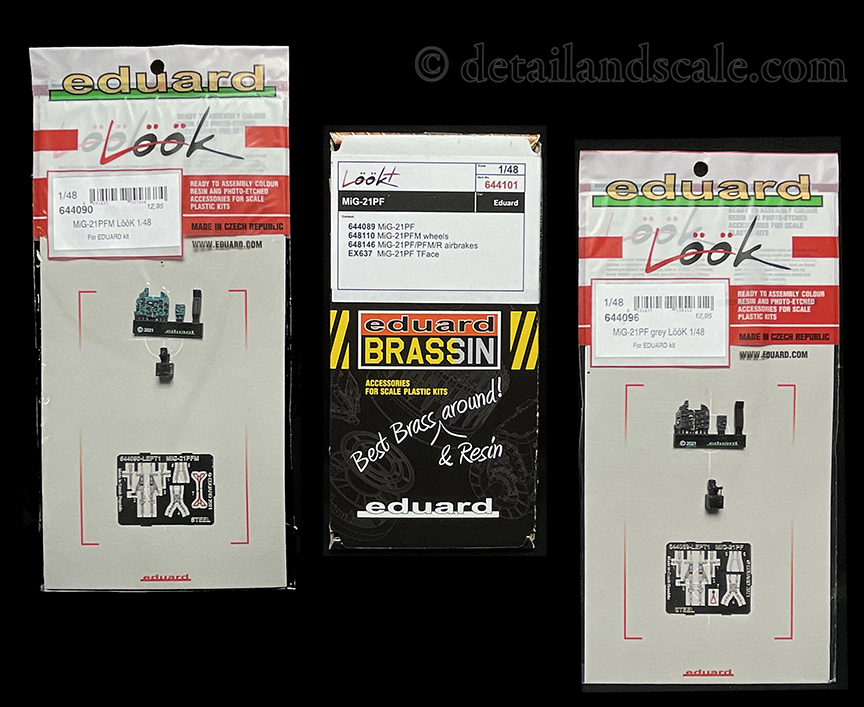 Eduard has developed quite a prolific family of 1:48 scale MiG-21 kits over the years, and are they indeed, and by far, the best Fishbeds in this scale.  They have also developed a deep range of detail sets for these kits that offer appreciably more detail than what the kits provide.  Here, we review three recent sets for their MiG-21PF and MiG-21PFM kits.

Eduard MiG-21PFM Löök #644090 (MSRP: $12.95) comes with four pre-painted cast resin parts, along with seven pre-painted photoetched metal parts.  The cast resin items comprise the instrument panel and the radar scope.  These are drop-in replacements for the kit parts.  The detail here is excellent.  Individual dial face details are discernable, and each dial face has been treated with Eduard’s clear glass effect.  The fret of photoetched metal parts provides the pilot’s shoulder harness and lap belts, buckles, and clasps, and ejection handle.  Photoetched metal, in your reviewer’s opinion, is the best medium in which to represent belts.  The pre-painting of the belts details is exceptional, right down to reproduction of the stitching and subtle shading effect that give the impression of shadow and depth. They look simply great.

Eduard MiG-21PF Grey Löök #644096 (MSRP: $12.95) is quite similar to the above set, containing four pre-painted cast resin parts and seven pre-painted photoetched metal parts.  This set, however, is for the late MiG-21PFs with grey-painted cockpits and whose ejection seats featured a different, simplified ejection handle.  All the complementary observations described above apply to this set as well.

Eduard Brassin #648101 MiG-21PF Löök+ (MSRP: $44.95) bundles three detail sets and a masking set at a savings to the customer.  The first set in here is # 644089, MiG-21PF Löök.  It is identical to the set described immediately above but features the turquoise-green cockpit color.  Next, #648110 MiG-21PFM Wheels    contains twelve cast resin parts: the nose gear wheel, the lowermost section of the nose gear strut, and the main tires and hubs.  Eighteen additional (and very small) photoetched metal parts provide some of the finest details for the wheels and gear.  These PE parts include fine hydraulic lines.  The resin casting is flawless, with sharp wheel hub details, circumferential tread, and finely represented raised detail on the tire sidewalls.  A very useful masking set is provided for the wheel hubs.  A set of speed brakes come in # 648146, MiG-21PF/PFM/R Airbrakes.  This set contains replacements for the kit’s two forward speed brakes and single aft speed brake.  Cast resin brake actuators are also included.  Again, the detail here is finely executed and is significantly better than the kit parts.  Finally, the ultimate Fishbed masking set, #EX637 MiG-21PF TFace provides masks for the exterior and interior of the windscreen and canopy which will further help the scale modeler to simulate the canopy glass seals.

We thank Eduard for the review sample.  You can visit them on the web at http://www.eduard.com and on Facebook at https://www.facebook.com/EduardCompany