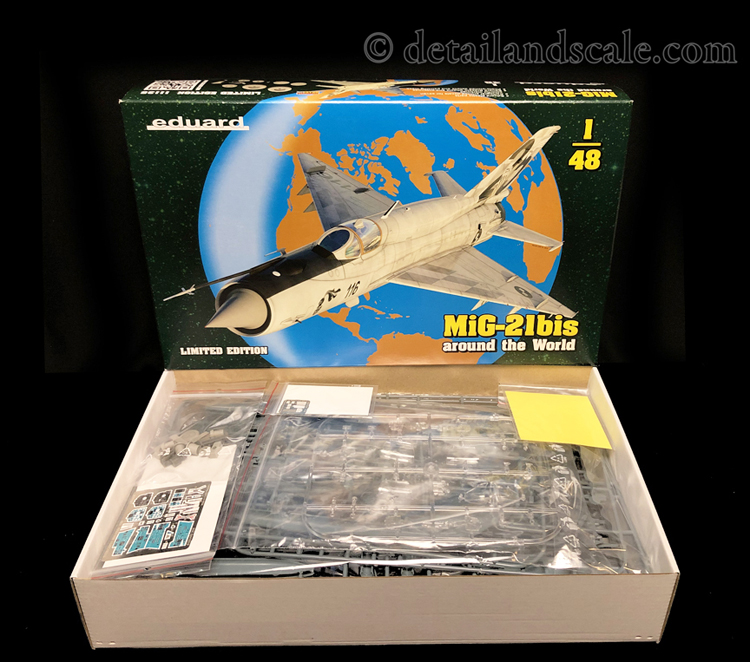 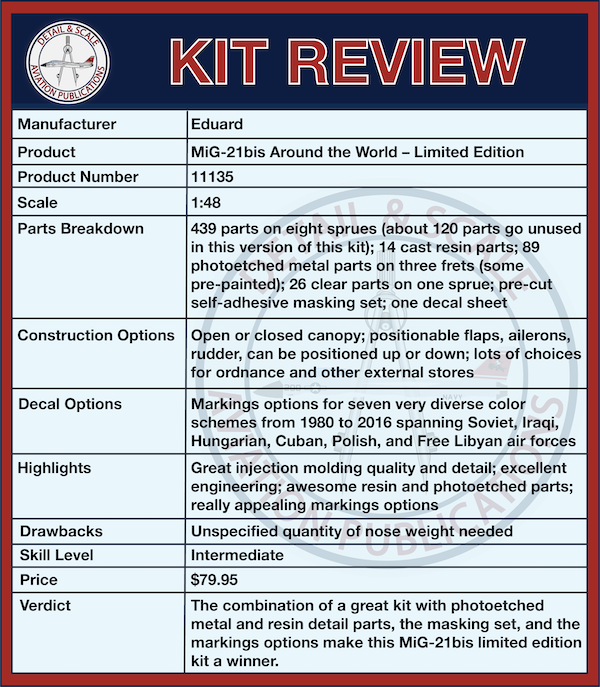 The MiG-21 Fishbed is one of the most widely produced and storied combat aircraft in history of aviation.  It was a front-line Soviet fighter and interceptor for a good portion of the Cold War, and many of the later variants are still in service with former Soviet client states.  There have also been a few hundred MiG-21 kits produced by many injection-molded plastic kit manufacturers from 1:144 to 1:32 scale.  Yet, the undisputed best MiG-21 can be found in the family of 1:48 scale Eduard Fishbeds.  They’ve recently reissued one of their Fishbed kits as a Limited Edition offering:  MiG-21bis Around the World with cast resin and photoetched detail parts, a masking set, and markings for seven jets.  Let’s check it out.

The Mikoyan-Gurevich MiG-21 started as an evolutionary development of the earliest Soviet jet fighters extending back to the MiG-15 and MiG-17.  Design work on the delta-winged MiG-21 (NATO reporting name:  Fishbed) started in the early 1950s.  It was to be a lightweight Mach 2-class aircraft that blended the strengths of a fighter with that of an interceptor.  The MiG-21 was also distinctive for its prominent air inlet shock cone.  From the start of its career, it was an agile fighter and remained quite controllable at the margins of the flight envelope.  Still, the Fishbed was plagued by notoriously short range and endurance and usually had about 45 minutes worth of gas onboard before the tanks ran dry.

More than 10,600 Fishbeds were mass-produced by the Soviets with several hundred others produced under license in India and Czechoslovakia.  Fishbeds were also produced for export, with many additional versions going to more than 60 export customers.  MiG-21s have seen a lot of action in the hands of these air arms, perhaps most infamously during the Vietnam War as operated by the North Vietnamese Air Force.  MiG-21s downed 56 U. S. aircraft (mostly F-4s and F-105s).  The U.S. claimed 92 MiG-21s destroyed throughout the war, with 60 as air-to-air kills.  Following the change in American tactics and technology in the wake of the Vietnam conflict, MiG-21s have, nearly universally, not since survived encounters with U. S. jets or those flown by U. S. allies.  Fishbeds have also been involved in nearly every Arab-Israeli war, hostilities between India and Pakistan, the Angolan Civil War, the Iran-Iraq War, and the ongoing Syrian Civil War among many other smaller conflicts.

The MiG-21bis first flew in 1972 under the in-house design bureau designation Izdeliye 75.  NATO code-named it the Fishbed-L and Fishbed-N, depending on the avionics package, which varied mostly in the configurations and capabilities of ground-control and ILS gear.  The -bis variant is often regarded as the ultimate development of the Soviet MiG-21 and saw diverse avionics upgrades from earlier systems along with inclusion of the much-improved Tumansky R25-300 turbojet engine.  Some 2,000 MiG-21bis airframes rolled off the Gorky assembly line and saw extensive service with the Soviet Air Force and PVO (Air Defense Force).  They were also exported widely and an additional 225 airframes were produced under license in India between 1980 and 1987.  The MiG-21bis still flies with a number air forces around the world, including with the Syrian air force still engaged in active combat.

Strengths:  Across the hobby, Eduard’s 1:48 scale MiG-21 has earned the reputation of being the best Fishbed on the market since the first kit in this family was released in 2011.  The Eduard MiG-21 tooling is further well known for its excellent quality and high fidelity.  It is also very accurate by all assessments, and the shapes, sizes, and panel line configurations of the Eduard MiG-21 all appear flawless.  The clear parts possess excellent optical quality.  The canopy, rudder, flaps, ailerons, and horizontal stabilizers are all separate parts and can be positioned as desired, but the mounting tabs have these parts going straight-in, so modifying those (simply, just remove them with a swipe of a knife blade) will be needed to achieve an alternative position.  The three ventral speedbrakes can also be built as closed or deployed.
My test fits of the wings and fuselage demonstrate an airtight fit.  Those who I know to have built this kit rave about how enjoyable it is to construct.  The external surface details are subtle and beautifully executed.  Some of the recessed rivets, such as on the wing surfaces, are very fine (shallow), so be mindful when painting so as not to fill them with paint or primer.

The specific MiG-21bis parts come on a Sprue J that has the spine and vertical stabilizer split into left and right halves.  The kit also provides parts for external stores:  two styles/sizes of drop tanks, along with parts for two R-3R, R-13, and R-60 air-to-air missiles, two FAB 250 bombs, two 490-liter and one 800-liter drop tanks, and a pair of rocket-assisted take-off (RATO) bottles.

The cast resin and photoetched metal parts both complement and build upon the strengths of the plastic in this kit.  They also provide various MiG-21bis-specific details.  The cast resin wheels and tires are in particular far superior to the kit parts.  The pre-painted fret, which contains the instrument dial faces, instrument panel, side consoles, ejection seat harnesses and belts, and ejection handle is just amazing.  The resolution of such fine detail that Eduard is able to represent on their pre-painted parts never ceases to amaze.  The two unpainted frets contain parts for the afterburner flameholder, wing fences, antennas, pitot tube vanes, and other airframe details.  Again, the quality is awesome.  The pre-cut self-adhesive masking set is more than handy, and it will save a lot of time making your own masks for the clear parts and airframe elements such as conformal antennas.

The decal sheet looks really great.  In terms of production quality, colors are excellent and everything is printed crisply, and all is in register.  The choices of markings options are of course another very clear highlight of this set.  The Cuban scheme is most interesting to me, as is the all-yellow Hungarian shark-mouth/Camel cigarette scheme (an airshow demo aggressor, actually).  All are distinctive and they represent a really great variety of Fishbed subject matter.  The decal sheet also contains an exceptionally complete set of airframe/pylon maintenance and munitions stencils.  Some are quite fine, but the largest of the stencils are quite legible.

Weaknesses:  I cannot offer any substantive critiques of this kit.  Just note that this kit is a tail-sitter if you don’t add weight in the nose behind the intake shock cone.  While the instructions do take note of this, a suggested quantity of weight would be very helpful to know how much to put in there.

The MiG-21bis Around the World Limited Edition kit represents yet another great Fishbed offering from Eduard.  The combination of great plastic kit detail and engineering, fantastic detail parts, great decals, and excellent markings options make this a winner several times over.  And for those interested in even more detail, Eduard also produces additional detail sets, from a Brassin cockpit to other photoetched metal details.  The sky is the limit with this one!