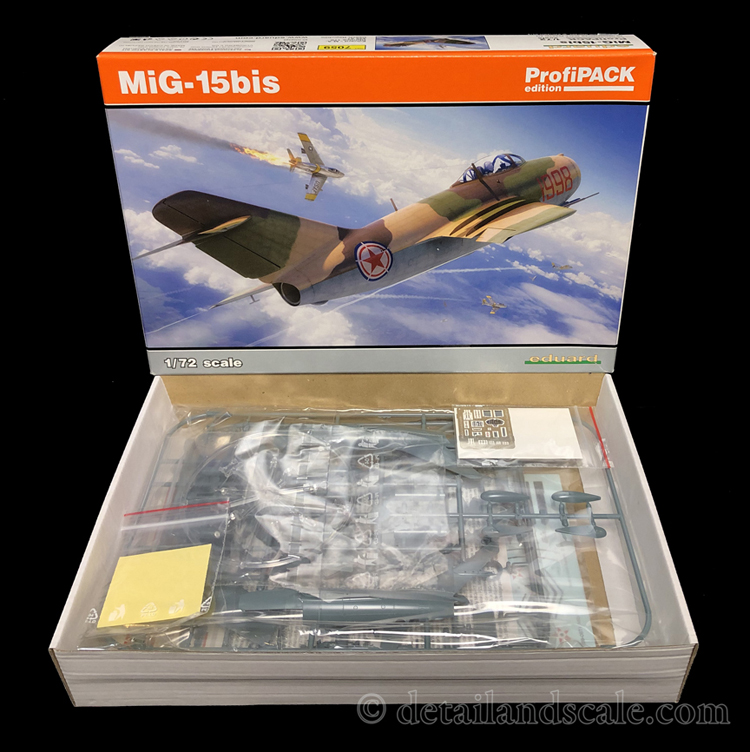 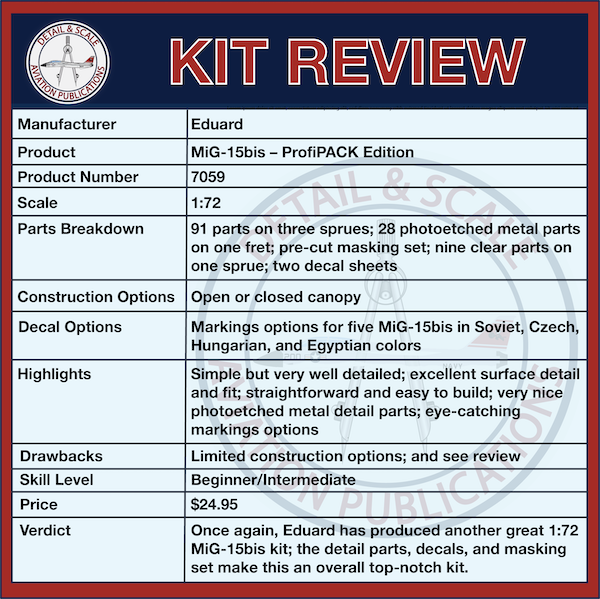 In the late 1940s, the jet age was dawning. U. S. combat jet capability of the era was exemplified by first-generation jets such as the Lockheed F-80 Shooting Star and Republic F-84 Thunderjet.  When the Korean War erupted, they soon found themselves terribly outclassed by a new Russian fighter, the MiG-15. In this recent release by Eduard, their 2013-era tooling of the 1:72 scale MiG-15 resurfaces with parts for the -bis variant, new decals, detail parts, and a masking set.  Here’s our take on this kit.

The Soviet Union’s first jet fighter was the MiG-9, and it was powered by reverse-engineered German BMW 003 engines captured at the end of WWII.  The MiG-9 was a fledging design in terms of both airframe and propulsion.  It was problematic all-around.  Work at the Mikoyan-Gurevich Design Bureau proceeded with options for a better fighter.  The powerplant issue was solved in rather infamous fashion.  Desirous for good post-war U.K.-Russian foreign relations), the British government sold the technical information, three engines, and a license to manufacture their advanced Rolls-Royce Nene jet engine to the Russians.  This became the Klimov RD-45 powerplant in 1947.  Meanwhile, back at Mikoyan-Gurevich, work on a new airframe proceeded in parallel.  It took many design cues from both the Messerschmitt Me 262 and the Focke-Wulf Ta 183.  The resulting prototype was the I-310, featuring 35-degree swept wings, a high tail, and two wing fences fitted to each wing.  It was powered by a single Rolls-Royce Nene fed by a split-forward air intake.  It first flew on 30 December 1947, and in the following months, it demonstrated exceptional performance, including top speeds out to Mach 0.9.  One of its primary missions was to intercept American bombers such as the B-29 and it was fitted with hard-hitting cannons for that purpose.

The I-301 was designated MiG-15 and the first production jet flew on 31 December 1948.  Operational service with the Soviet Air Force service began 1949, and its NATO reporting name was “Fagot.”  The improved MiG-15bis (or “second”) entered service in early 1950 with a Klimov VK-1 engine, a landing light in the air intake separator, and horizontal speed brakes.  Its 23 mm cannons were repositioned closer to the centerline and some -bis aircraft also were fitted with underwing pylons for ground attack ordnance.

When the Korean War erupted, the MiG-15 was soon on hand, as Stalin was already starting to widely export the jet to Soviet allies and client states.  While marked in the colors of the North Korean air force, Soviet fighter pilots often operated these aircraft (at the time, in a very covert manner), and U. S. piston-engine aircraft such as the F-51 and B-29 and early, straight wing jets, such as the F-84, were badly outclassed and suffered heavy losses at the hands of the MiG-15.  The F-86 Sabre was rushed into the theater, and it was found that F-86 and the MiG-15 had respective strengths and weaknesses in the air combat arena.  The MiG could escape from or kill the Sabre at higher altitudes and in the vertical fight, but the F-86 was superior below 25,000 feet and in a horizontal turning engagement.  In the early stages of the Cold War beyond the Korean peninsula, MiG-15s engaged and shot down a number of unarmed U. S. reconnaissance aircraft around the margins of the Iron Curtain including RB-29s, RB-47s, and RB-50s.  Egyptian MiG-15s participated in the Suez Crisis of 1956.  The USSR built 1,344 MiG-15s, 8,352 MiG-15bis variants, and 3,434 two-seater MiG-15UTIs.  Another 4,100 were produced under license by Czechoslovakia and Poland.  While the MiG-15 was supplanted by the yet more advanced MiG-17, its impact on the early years of the jet age was forever established.

Eduard’s 1:72 MiG-15bis ProfiPACK contains 91 parts on three sprues, nine parts on a single new clear sprue, 28 photoetched parts on one fret (most of them are pre-painted), and a masking set.  The instructions play out over 11 pages, and markings for five MiG-15bis aircraft are provided:

Strengths:  This kit is based on Eduard’s new-tool kit from 2013, which has been repackaged in some form or another about 20 times to date.  It’s a very popular kit in 1:72 scale, and that has a lot too do with the fact that it’s the best MiG-15 kit in 1:72 scale on the market.  The kit itself is relatively simple.  I find it to be accurate.  There are not a lot of parts and the fit is quite good.  The surface detail, consisting of very delicate and fine panel lines and rivet/fastener detail is, in a word, beautiful.

Other features that are really high points here include the single-piece intake cowl, the separate wheel hubs and tires, and really straightforward landing gear assemblies.  The approach to doing the left and right intake troughs as part of the cockpit sidewalls is a neat touch as well.  Decals are provided for the instrument panel as another building option.  The canopy can be positioned open or closed.  There are styles for a couple of different underwing external fuel tanks (the bombs on Sprue C are not used in this version of the kit).  The instructions in two different places remind the builder to add some nose ballast.

The really impressive elements here are the photoetched parts which add a great deal of detail and visually interesting features to the kit, such as the prepainted instrument dial faces, the pre-painted harnesses (complete with simulated stitching details), cockpit sidewalls, and other details. The masking set will save a lot of time with masking the canopy as well as the big blue arrows on the nose in Markings Option B (alternate decals are provided for the arrows as well).

The markings options are all really good choices for the scale modeler.  Personally, I really like the Czech demo team, the Egyptian, and the ex-64th IAK options the best.  They are unusual and eye-catching.  The decals appear to have been printed in-house by Eduard, and they all look great.  I can see no technical errors in printing, and the faded/overpainted markings in Markings Option E are done really well as decals.

Weaknesses:  I cannot offer any substantive critiques of this kit.  The control surfaces and speed brakes are not separate parts, and that might irk a few people (but that’s why we have razor saws in this hobby).  While the instructions indicate the need for nose weight, the amount of ballast is not specified.

Eduard continues to get well-deserved mileage out of their solid 1:72 scale MiG-15bis kit, especially when combined with photoetched metal parts, a masking set, and these new decals in this ProfiPACK edition of the kit.  Fans of Soviet, Warsaw Pact, and Korean War-era subject matter will certainly enjoy this issue of the kit, and its relative simplicity, nice detail, and outstanding markings options really extends an invitation to a wide range of scale modelers.  Enjoy this one!