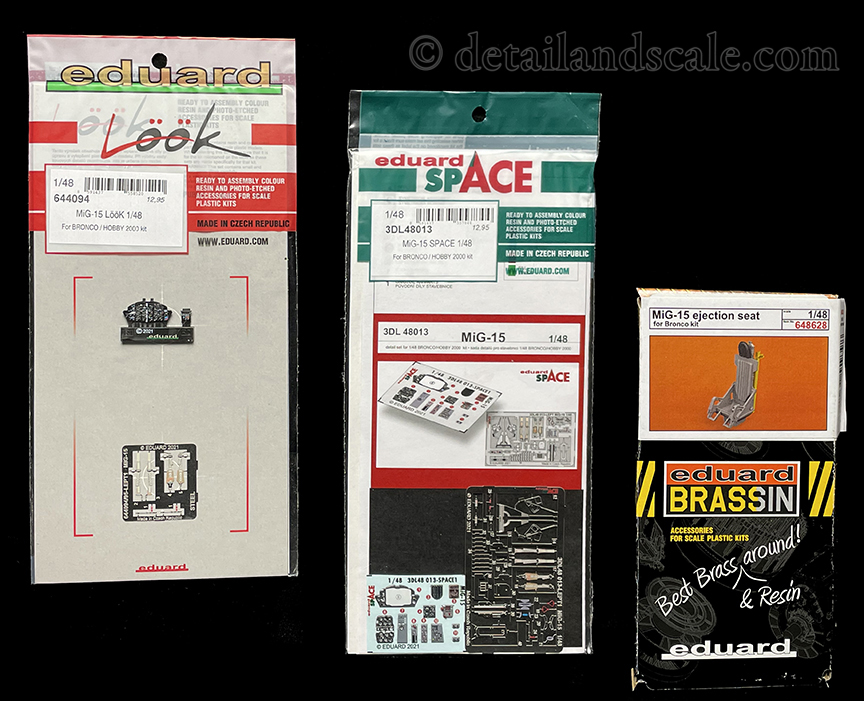 Eduard MiG-15 Löök #644094 (MSRP: $12.95) comes with two pre-painted cast resin parts along with six pre-painted photoetched metal parts.  The cast resin items comprise the instrument panel, and are drop-in replacements for the kit part.  The detail is excellent: individual dial face details are discernable, and each dial face has been treated with Eduard’s clear glass effect.  The fret of photoetched metal parts provides the pilot’s shoulder harness and lap belts, buckles, and clasps.  Photoetched metal, in your reviewer’s opinion, is the best medium in which to represent belts.  The pre-painting of the belt details is exceptional, right down to reproduction of the stitching and subtle shading effect that give the illusion of shadow and depth.

The quality of 3-D printing in this set is very good.  Buttons are represented as finely raised features, and various instrument dial faces feature very finely printed details that are designed to lay down on the kit parts after they are sanded smooth.  Each glass dial face is treated with Eduard’s “glass effect” to produce just a perfectly smooth and high-gloss surface mimicking the reflectivity of glass.  The pre-painting of the shoulder harnesses and lap belts is particularly nice once again, and it captures even the finest of stitching details.  The only “ding” that can be considered is that the 3D printed parts possess a somewhat glossy sheen, and everything but the instrument dial faces could use an application of a flat coat to achieve the most realistic appearance for the MiG-15 cockpit.

Eduard Brassin #648628 MiG-15 Ejection Seat (MSRP: $19.95) is an outstanding replacement for the kit seat.  The Eduard ejection seat builds up out of two pieces: a single piece cast resin ejection seat body and a separate headrest.  Two photoetched frets contain another fourteen parts, including the ejection seat rails, shoulder harnesses and lap belts, and other small details.  As is the case with Eduard’s resin casting, the detail here is also finely executed.  It is significantly better than the kit parts – from the details of the seat pad, deep bucket seat, and the finest bolts on the seat frame.

We thank Eduard for the review sample.  You can visit them on the web at http://www.eduard.com and on Facebook at https://www.facebook.com/EduardCompany