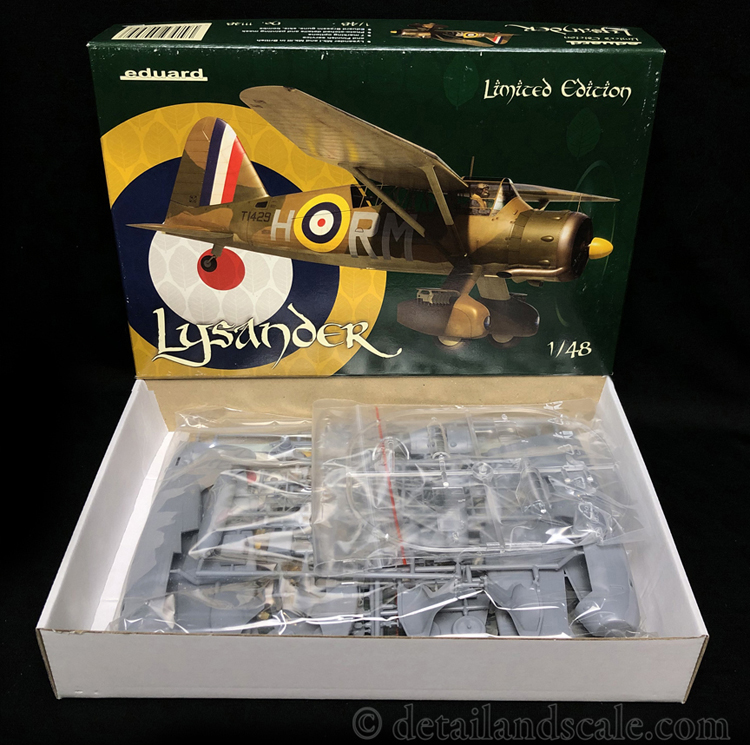 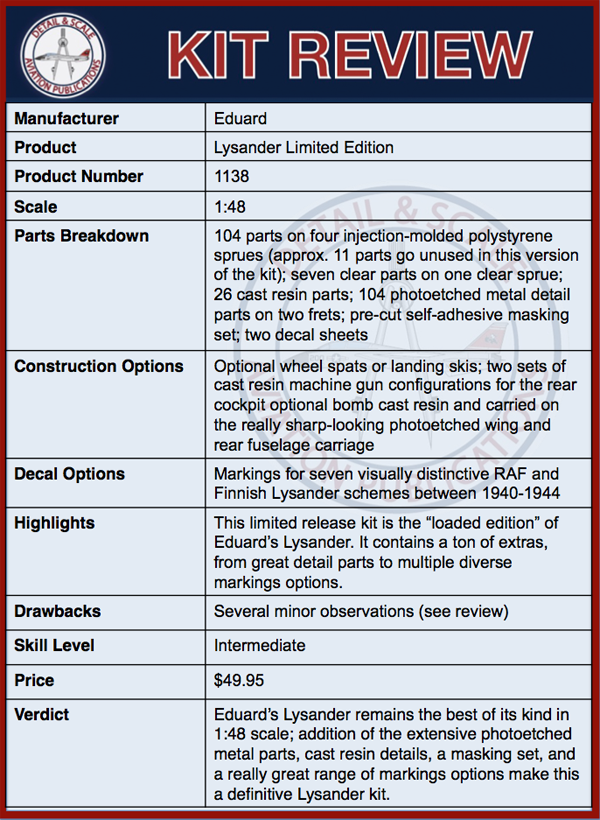 The Westland Lysander was one of the more unusual military aircraft of the late 1930s.  While it became obsolete in its original role as a liaison and battlefield observation aircraft in the early days of World War II, it found a unique niche in special operations and clandestine missions in occupied Europe.  In this review, we examine Eduard’s recent limited edition 1:48 scale Lysander kit.

In 1934, Great Britain’s Air Ministry issued a request for an army co-operation aircraft to replace the Hawker Hector.  Proposals were submitted by Hawker, Avro, Bristol, and Westland.  The Westland design, which was based partly upon an extensive series of interviews with RAF pilots about the requirement, was declared the winner in 1936.  The Westland aircraft, designated as the Lysander, featured a wide field of view, good low-speed handling characteristics and STOL performance.  It was powered by a Bristol Mercury radial engine, featured fixed landing gear, and had high wings with a reverse taper.  The Lysander was aerodynamically advanced for its day.  The automatic wing slats, slotted flaps, and a variable incidence tailplane produced immense amounts of lift such that the Lysander had a stall speed of about 56 knots.

The first Lysander Mk. Is entered service in June 1938 and were used for message dropping and artillery spotting.  When war broke out in Europe, Lysanders were put into action as spotters and light bombers over France.  They were badly outclassed by German fighters, and the last Lysanders were withdrawn during the evacuation of Dunkirk.  Lysanders assumed various provisional roles back home in the U.K.  By 1941, a new purpose was envisioned for the aircraft, starting with No. 138 (Special Duties) Squadron.  Into 1944, Lysanders inserted and removed agents from occupied France.  They also rescued aircrew who had been shot down behind enemy lines.  In all, 1,786 Lysanders were built across three principal variants.  Beyond the RAF, the Free French, Canada, Ireland, Finland, India, Egypt, and even the USAAF operated various numbers of Lysanders.  While the RAF retired its last example in 1946, the Lysanders of the Royal Egyptian Air Force were the last to see active service in the 1947–1949 war against Israel.

Eduard’s 1:48 scale Lysander Limited Edition kit consists of 104 injection molded parts on four sprues (some 11 parts go unused in this version of the kit), and seven clear parts on one clear sprue.  This boxing is also loaded with detail parts: 26 cast resin parts, 19 pre-painted photoetched metal parts on one fret, 85 unpainted photoetched frets on two other unpainted frets, two clear acetate parts, and a pre-cut masking set for the windscreen and canopy, wheel hubs, and landing lights.  The markings come on two decal sheets and cover the following aircraft:

Strengths:  Eduard’s 1:48 scale Lysander is based on a 2001 kit produced by Gavia.  In 2003, Eduard picked up the molds and has since released six issues (to date) of the Gavia kit under the Eduard banner.  Of all of these, this recent limited edition kit is the “loaded edition,” as it contains a ton of extras, from great detail parts to several diverse markings options.

The tooling of the kit itself could be described that as a high quality limited edition-type kit from the early 2000s.  That is to say that the surface texture is overall a bit rough and there are no locating pins for the wing and fuselage halves.  Beyond that, the surface details are really excellent, with crisp, raised features where they should be, and finely recessed features (such as the edges of control surfaces, engine cowling fasteners, and some rivet details) are also very well done.  The raised ribbing on the fuselage and wings are really nice.  From speaking with a few people who have built earlier versions of this kit, it does build well, as long as one takes their time and is attentive to alignment (and used slow setting super glue).

The kit is relatively simple in terms of parts count and parts breakdown.  The kit cockpit is basic but accurate, and it includes the optional inside-the-cockpit fuel tank used in two of the schemes here.  However, the Lysander’s cockpit receives the total deluxe treatment with the PE detail parts in this limited edition issue.  The photoetched metal instrument panel is great down to the dial details, as are the beautifully pre-painted shoulder harnesses (two styles included), lap belts, and other details such as the rudder pedals, trim wheel, radio face details, side console details, and other items which are all significant highlights.  In other words, the photoetched metal parts elevate the cockpit to a totally different level than what the plastic parts alone can provide.  Another high point of the kit is the Bristol Mercury engine.  It builds up out of individual, very finely molded single-piece cylinder heads to which are added photoetched metal pushrods.  The exhaust pipe is also provided as a cast resin item.

The resin parts provide optional wheel spat and landing ski configurations used in two of the Finnish aircraft.  There are also two sets of cast resin machine gun configurations for the rear cockpit and cast resin bomblets which can be loaded on the really sharp-looking photoetched wing and rear fuselage carriage racks and bomb shackles applicable to markings options A, B, D, and G.  Even without bombs attached, the PE racks are impressive just on their own.

The pre-cut, self-adhesive masking set will save quite a bit of time and effort masking the Lysander’s greenhouse-style canopy, wheel hubs, and the landing lights that are integral to the front of the spats. The decals are printed by Eduard and look great, with excellent color, register, resolution, and thin, restrained carrier film.  They also appear to be the newer-style wet transfer decal types.  The kit comes with great schemes to choose from (I really like options B, C, and E for the interesting colors and markings).

Weaknesses:  Beyond the lack of locating pins and other features that would make construction a little bit easier, perhaps the biggest weaknesses of this kit are the lack of more basic construction options.  That is to say that while the kit does a great job in providing construction options for the Lysander Mk. I and Mk. III/IIIA/III(SD), features such as separate and positionable flaps, slats, elevators, and rudder are not present here as they would likely be in a more modern kit.

Despite its age, Eduard’s Lysander kit remains solid and is the best Lysander in 1:48 scale.  The addition of the extensive photoetched metal parts, cast resin details, the masking set, and a really great range of markings options make this an inviting project.  A little experience in building older-style, limited run plastic kits will also be helpful to get the most out of this project.  Also note that by the time this review reaches you, these kits are likely going to be sold out (recall that this is a limited edition).  If you have interest in this kit, get yours while you can.