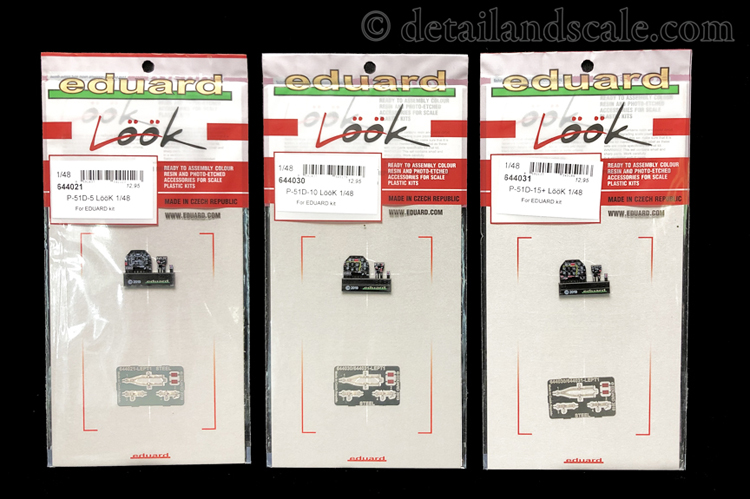 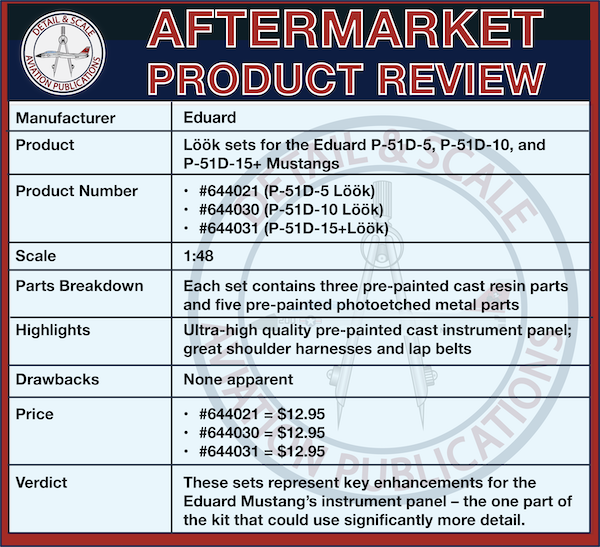 Each set comes with three parts that is cast in black resin and then painted using Eduard’s specialized production process.  And for good measure, Eduard has also included their pre-painted STEEL set for the Mustang shoulder harnesses and lap belts.

The resin parts are fully three-dimensional castings with appropriately raised instrument bezels, switches, knobs, and other details such as yellow and red buttons, switches, and data placards.  Each set is designed to drop into the kit.  The precision-painted instrument dial faces are the real highlight.  Consulting my Mustang references, each dial looks well represented, and you can visually identify and distinguish between the compass, altimeter, airspeed indicator, artificial horizon, engine ignition switch, the fuel tank selector panel and switches, and so forth.  Eduard also dropped in a bit of their distortion-free, self-leveling clear glass treatment (I think it’s a clear gel medium) atop each dial face.  They have also done a pretty good job in representing the differences in layout of the P-51D-5 instrument panel and the notably different D-10 and D-15 and later production blocks.  The differences between the D-10 and D-15+ are pretty subtle and involve switch positioning and variation in data placard presence and placement.  I think Eduard has reproduced those differences in pretty accurate fusion, as far as I can tell.

As mentioned earlier, a STEEL photoetched seatbelts set also comes with each Löök instrument panel.  These look great and contain details including stitching and even some nice shading/shadow effects.  Your reviewer also thinks PE parts are the best way to do seatbelts, so their presence is always welcome.

For the quality and detail that it brings to the Eduard 1:48 scale P-51D, these great Löök sets are also very well priced.  If you’re going for that superdetailed appearance, but either don’t like or have the time to fiddle with photoetched instrument panel details, these are for you.