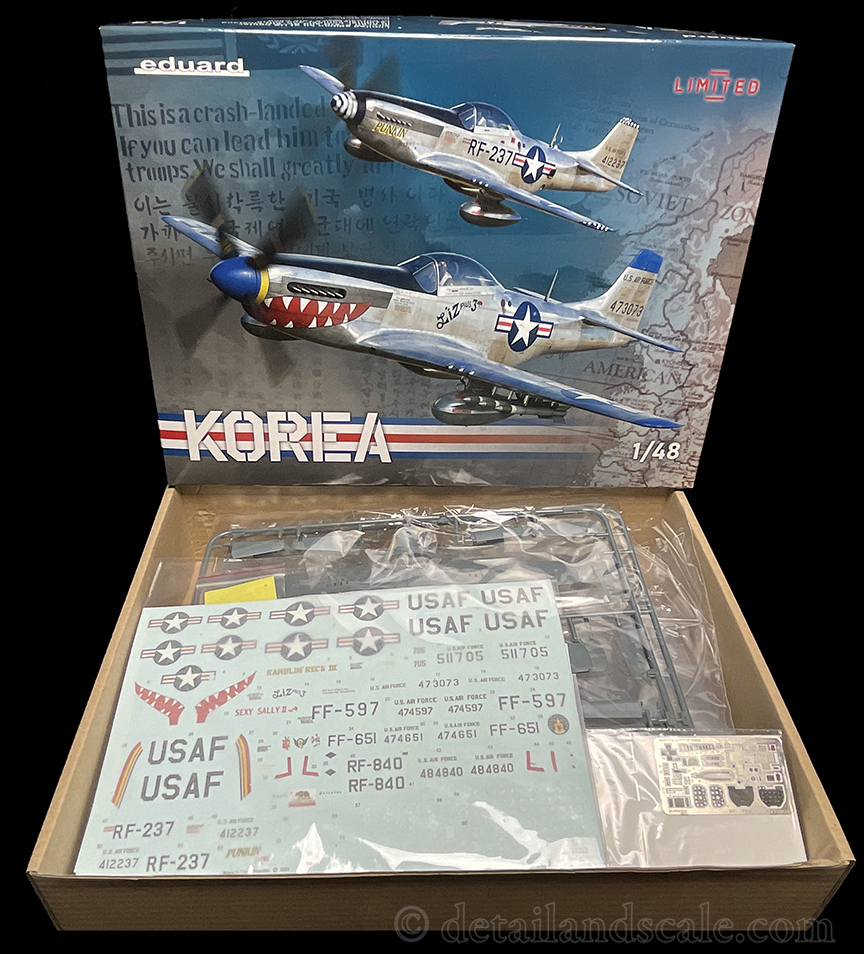 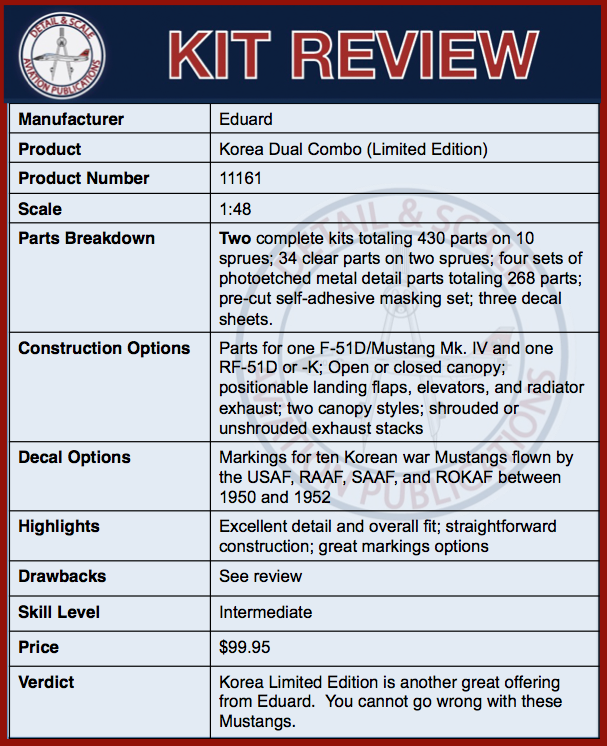 The North American P-51 Mustang left an indelible mark upon the outcome of the Second World War.  Still, the story of the P-51 did not end in 1945.  Re-designated as the F-51D, Mustangs provided a key element of USAF airpower in the early phases of the Korean War.  In this review, we take a look at Eduard’s latest 1:48 scale Mustang offering:  KoreaLimited Edition, which is a dual combo kitset with two F-51D/Mustang Mk. IV/RF-51D/K kits that come with detail parts and decals for ten different schemes.

The “Cadillac of the Skies” was born in early 1940 when the U.K. was seeking a stopgap fighter to help hold the line against the German Luftwaffe.  North American developed the legendary P-51 Mustang first for the RAF, and it was soon adopted in far greater numbers by the USAAF.  During WWII, P-51s fought in all theaters of the conflict and claimed 4,950 air-to-air kills.  In USAAF service, P-51s escorted bomber formations over Europe beginning in 1943 and increasingly conducted ground attack and close air support missions following D-Day.  The definitive P-51D was fitted with a bubble canopy providing excellent 360-degree visibility, and the aircraft could reach around 440 MPH while its service ceiling was just shy of 42,000 feet.  Armament consisted of six wing-mounted .50-caliber machine guns while range-extending drop tanks, rockets, and bombs could be fitted under the wings.

Following World War II, Mustangs flew on with the USAF Strategic Air Command and Air National Guard.  In 1948, the designation P-51 was changed to F-51 (F- for fighter).  By 1950, most USAF Mustangs were either placed in storage or sent to fly with Air Force Reserve and ANG units.  When the Korean War Erupted in 1950, many F-51Ds were shipped via aircraft carriers to Korea and operated by the USAF, the South African Air Force (SAAF), the Royal Australian Air Force (RAAF), and the Republic of Korea Air Force (ROKAF). Mustangs were used primarily for ground attack and photo reconnaissance.  Owing to the perennial weakness of the Mustang’s vulnerable liquid cooling system to ground fire, more than 350 were shot down over Korea.  The USAF, RAAF, ROKAF, and SAAF flew Mustangs over Korea until 1953 when they were replaced by jets.  In all, Mustang drivers accrued 62,607 sorties over Korea, dropped 12,909 tons of bombs, and fired 183,034 rockets destroying tens of thousands of ground targets.  F-51s also claimed sixteen air-to-air kills against North Korean piston-engine aircraft, while damaging seven MiG-15s on the ground and recording two probable kills against the MiG-15 in the air.

Eduard’s 1:48 scale Korea Dual Combo Limited Edition kit contains two complete Mustang kits.  One is a F-51D-25/30 (fuselage and tail parts on Sprue D) and the other an RF-51D (Sprue E).  Between the two of these complete kits, the box contains 430 parts on 10 injection molded polystyrene sprues.  Thirty-four clear parts come on two sprues.  There are four sets of photoetched metal detail parts totaling 268 parts (most of them are pre-painted).  There is also a pre-cut self-adhesive masking set for both Mustangs, two primary decal sheets and one sheet filled with stencils.  The full color instruction booklet contains an excellent illustrated overview of the F-51/RF-51’s history over Korea, and then organizes the build over 16 pages.  Markings for 10 airplanes include:

Strengths:  We have recently reviewed many different issues of the Eduard 1:48 scale Mustang (which you can find HERE).  What’s new here for the Korea Dual Combo Limited Edition release?  Primarily, it is the decals along with an additional set of photoetched metal detail parts (see below).  Beyond that, all the good things I have described about the basic Eduard 1:48 scale Mustang in previous reviews at detailandscale.com apply to this dual combo kit set as well.

To recap, Eduard can indeed claim the “best 1:48 scale P-51D” with these kits.  Surface details are very accurate.  Eduard has nailed the relatively featureless wing surfaces while rivet/fastener details on the fuselage and tail surfaces are as exquisite as they are sublime.  Fits between the fuselage halves and wings are just about airtight, and the engineering is very well done.  It is a real pleasure to build.

The cockpit features separate frames for the sidewalls, a multi-part seat, and excellent representations of the radio, battery, and fuel tank, down to the separate parts for the wiring and fuel line.  The most impressive elements here are the photoetched parts that add a considerable amount of detail and visually interesting features to the cockpit.  These include the pre-painted instrument dial faces, the gorgeous pre-painted harnesses (complete with simulated stitching details), various placards, and the photoetched throttles, trim wheel, and other parts.  In sum, the cockpit looks excellent with these detail parts.  Still, if PE parts are not the builder’s preference, alternate instrument face decals are also provided.

The main gear well is the best of its kind in 1:48 scale, and it builds up from about 16 parts.  It is very rich with detail, from the textures of the parts and ribs to the fuel lines and pump details.  All that’s missing are the smaller hydraulic and electrical lines, and the builder can add those relatively easily if they wish.  There’s also a fully enclosed tail wheel well that looks excellent.  Another nice feature is a single-piece gun port section on each wing.  Unlike the Tamiya kit, for example, the gun barrels do not assemble out of upper and lower halves resulting in some tricky/ugly seam work.  Eduard’s engineering approach here is good, but the fit can be a little hard to get just right, so test fit and use slow setting super glue.  Also note that there is a blanking plate on the inside of each wing so that shell ejection ports do not open up into the hollow inside of the wing for all to see.

The masking set will save a lot of time when masking the windscreen, canopy, and wheel hubs.  The exhaust stacks are great, and even though they are injection-molded, the ends are nicely hollowed-out.  Here, there is no need for a cast resin replacement set.  The clear parts possess excellent optical quality, and the windscreen has an extended fairing around it, so gluing, masking, and painting is a very low-risk activity.

The markings options are very impressive.  First, take some time to read the aircraft histories in the markings guide.  Eduard’s research team did not simply pick colorful schemes to include, but chose to feature Korean-era Mustangs with poignant and meaningful histories.  Most of these Mustangs also did not make it home, though a few pilots were luckier.  Second, you might find yourself picking up a few Eduard’s Overtrees issues of their Mustang just so you can build other options from these decal sheets.

Back to the markings options: Eduard, as usual, really knows how to capture some colorful, classic, eye-catching schemes.  To me, there is something very poignant about Mustangs wearing the modern U. S. national insignia: they look good on the airplane, and represent a very interesting “bridge” between World War II and the modern era.  The sharkmouth on “Liz Plus 3” is an almost automatic choice to build, but COL Clark’s F-51D is an absolute classic.  “Punkin,” “Little Lynn,” and the ROKAF, RAAF, and SAAF schemes are also interesting and different.  The decals were printed in-house by Eduard, and they all look great.  I can see no technical errors in printing.  There is also a valuable painting guide highlighting where natural metal versus aluminum lacquer-painted surfaces are found on silver P-51s.

Weaknesses:  Very few substantive critiques can be offered about this kit.  Be really careful with the thin plastic strip that separates the left and right wheel wells on the lower wing half (Part B-15).  It is quite fragile, and in some kits, it is warped/bent inward because it is so fine.  Just know it will go back to its proper shape when the gear well assembly is fitted.  One minor issue for some folks is that if PE parts are not your cup of tea, the detail on the pilot’s instrument panel is really minimal.  The manufacturer’s idea really is to either use the PE parts or kit supplied instrument panel decals.  Detail painters have little to work with.  Note that if you want to position the ailerons, rudder, and elevators in anything but the neutral position, you’ll need to remove their mounting tabs.

Korea Dual Combo Limited Edition is another excellent offering from Eduard.  You cannot go wrong here: it combines two of their 1:48 scale Mustang kits with parts for the F-51D, Mustang Mk. IV, and RF-51D/K, detail parts, a masking set, and an outstanding selection of markings options.  If you seek more detail, Eduard also produces a very expansive range of detail sets for these kits.  However you choose to proceed, Korea represents a great combination of fit, detail, markings options, and historical narrative that is a unique combination to interest Mustang fans and far wider range of scale modelers at the same time.  As is always the case, since it is a limited edition set, get yours before they are all sold out.