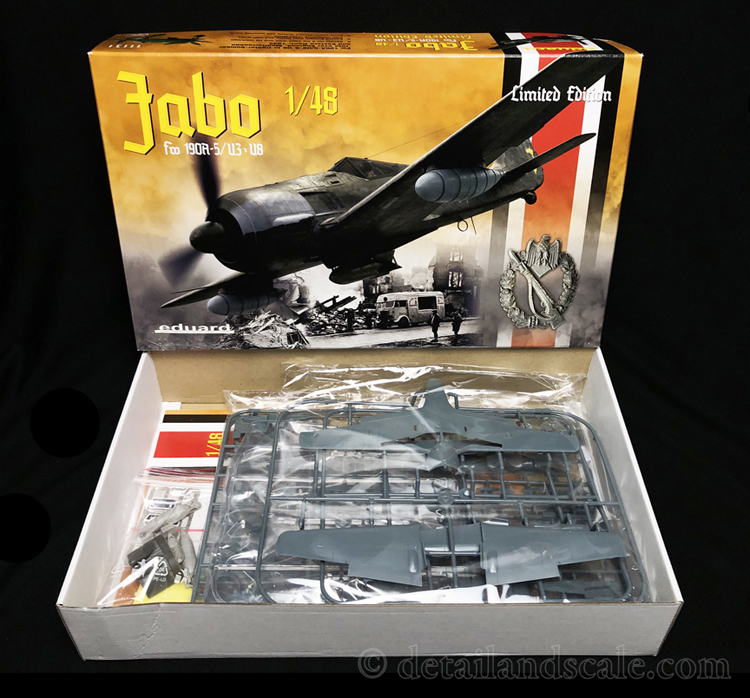 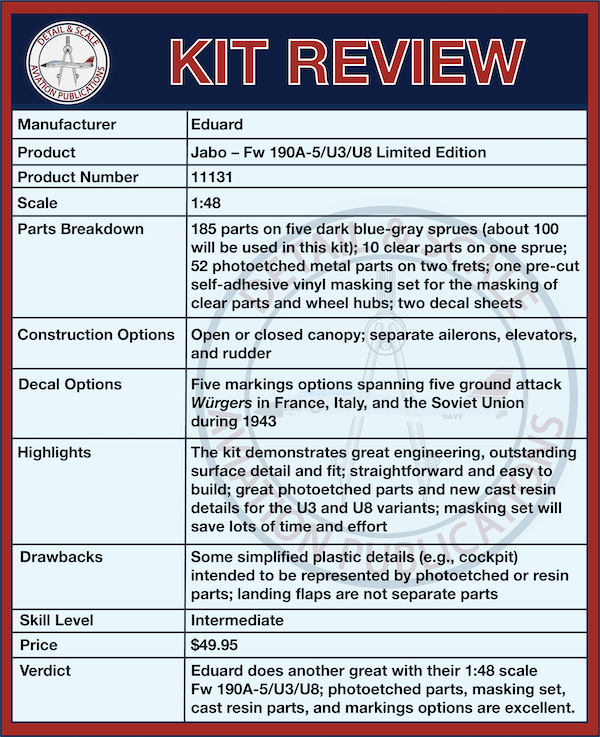 In 1934, the German Ministry of Aviation (RLM) issued a call for proposal for a fighter in the efforts to rearm and definitively modernize the Luftwaffe.  Arado, Focke-Wulf, Heinkel, and Messerschmitt developed prototypes for a fly-off.  The Messerschmitt 109 was selected in 1936 as the winning design.  During the following year, the RLM defined a need for a second fighter to complement the Bf 109.  Focke-Wulf designers, led by Kurt Tank, took another look at their losing Fw 159 prototype and began to develop a range of new designs, drawing on the 159’s virtues but also transcending its weaknesses.  Design studies reached maturity when they included an air-cooled, 14-cylinder BMW 139 radial engine paired with innovations that achieved a low-drag cowling which also optimized engine airflow and cooling characteristics.  The extensive use of electrical controls and control rods (as opposed to cables) made the Fw 190’s handling more crisp and responsive than the Bf 109.  Other various aerodynamic refinements also increased the Fw 190’s wing loading.

The first Fw 190 V1 Würger (or Shrike) flew on June 1, 1939.  This marked the origin of one of the most prolific production runs of any WWII-era fighter, involving some 20,000 airplanes that spanned (by my count) 77 variants and sub-types.  Many were powered by the twin-row BMW 801 radial engine.  It was arguably the Luftwaffe’s most effective day fighter, serving in every corner of Europe and North Africa.  It also excelled as a fighter-bomber, dedicated ground-attack platform, and night fighter.  In the opinion of many pilots, the Fw 190 was superior to the Bf 109 in terms of its heavier armament and superior low- to mid-altitude performance.

The Fw 190A-5 was in essence a slightly modified Fw 190A-4.  The A-4 itself was an improved A-3, armed with the standard pair of 7.9mm MG 17s above and behind the engine and two MG 151 20 mm cannons in the wing roots  The BMW 801D-2 powerplant was equipped with a power boost system that injected a water-methanol mix into the cylinders to coax additional horsepower and altitude from the engine.  The A-5 variant sought to capitalize on all that extra engine power to carry more air-to-ground ordinance.  To facilitate this, the nose was stretched a mere six inches, and this extension carried through to the Fw 190A-9.  This small extension was sufficient to shift the center of gravity to accommodate drop tanks and a 550-pound bomb on a centerline bomb rack.  The outboard cannons were deleted to save weight in many A-5s.

Seventeen A-5 subvariants were eventually produced, though ten of those were experimental or testbed aircraft that were not mass produced.  The Fw 190 A-5/U3 was a fighter bomber variant, or Jabo, that saw the outer wing guns removed and were fitted ETC 501 bomb racks on the centerline (for a 250 kg bomb) along with wing-mounted racks that carried 300-liter external fuel tanks.  The Fw 190 A-5/U8 was a later version that carried SC-250 centerline mounted bombs, tanks, and like the U3, a pair of MG 151 20 mm cannons.  Later, the U8s was re-designated as Fw 190G-2.

Eduard’s ProfiPack edition of their 1:48 scale Fw 190A-8/U3/U8 comes in their standard top-opening box.  The kit comes on five blue-gray sprues holding a total of 185 parts (about 100 will be used; see below).  Ten clear parts are also found on one clear sprue.  In this Limited Edition issue, there are also one fret of pre-painted photoetched metal parts containing 49 parts, one smaller fret containing three unpainted parts, six cast resin parts, and one pre-cut self-adhesive masking set for the masking of the windscreen, canopy, and wheel hubs.  The decal sheets provide one full set of airframe stencils and markings for five airplanes:

Strengths:  the new generation of Eduard Würgers has addressed all the previous critiques of their first generation 1:48 scale 190s.  All of the observations and accolades that apply to their previous new-issue Fw 190s (see reviews HERE) also apply here.

But to recap: the longer A-5 nose added about six inches to the airframe, and that’s an additional 3.1 mm in 1:48 scale.  Measuring these with my digital calipers, the fuselage halves on the new Sprue R is exactly 3.1 mm longer than the Fw 190A-2, A-3, and A-4 produced by Eduard.  The new wings on Sprue G are retooled so as to only have the inboard MG 151s fitted.  The cast resin bomb racks and external fuel tanks are gorgeous.  The casting is exquisite.  The centerline bomb rack and bomb are also provided sprues.

Parts breakdown and overall engineering result in a kit that is quite straightforward and easy to build.  Construction will not be particularly time consuming.  Surface detail is outstanding as expected from Eduard, with beautifully executed and restrained recessed panel lines and elegant recessed rivet details arrayed into complex (and as best I can tell) ultra-accurate patterns.  I snipped out the fuselage halves and wings to dry fit them, and they appear to line up in airtight fashion.  No filler required here.

The plastic cockpit parts by themselves are a bit simplified, but the 49 pre-painted photoetched metal parts for the instrument panel, side consoles, shoulder harnesses, and lap belts (among other detail parts) add an impressive level of detail (as it would seem Eduard intended from the get-go).  Engine exhaust stacks are okay for 1:48 scale.  While the exhausts themselves are not hollow as a resin casting can achieve (and there’s a Brassin set for that; see review, among many other sets for the Eduard 1:48 Bf 109s, HERE), the kit parts do feature slightly recessed faces and a good wash of a dark color can achieve the illusion of a deeper exhaust.

The landing gear, tires, and tailwheel assembly are all very nicely detailed and molded.  The rudder, elevators, and ailerons are all separate parts.  At least for the rudder, the mounting tab seems to force a straight-in fit and a little modification might be necessary to fit the rudder in a deflected position.  The clear parts are gorgeous and possess pretty much perfect optical quality with no seams present.  Likewise, the pre-painted photoetched parts are beautifully made and appear just about perfect.

There are a lot of unused parts in this kit – about 80 in all.  These include an additional propeller, other MG 17 fairings, underwing, dipole nightfighter antennas, and alternate gear doors, rudders, and ailerons for other Fw 190 variants.

The decal sheets were printed in-house by Eduard and cover the five well-chosen and eye-catching schemes described above.  There’s also a complete set of airframe stencils.  Alternate decal versions of the instrument faces are provided if working with the PE parts is not the builder’s preference.  Printing appears perfect.  Everything is in register, colors look great, and carrier film is finely restrained.

Weaknesses:  There is very little to critique here.  First, the landing flaps are not molded as separate parts, but there’s an Eduard PE set for that.  Second, I do believe the inboard main gear well doors should be closed in the parked position, as I understand that they cycled open and then closed when the gear was either retracted or extended.  Third, the cockpit and gear wells are just a bit simplified.  I can confirm this particularly as I had my head up into the cockpits and gear wells of a pair of 190s recently at the Military Aircraft Museum in Virginia Beach, Virginia.  Again, there’s plenty of photoetched and Brassin sets to take care of any “minimized” detail there, and almost anyone can add the appropriate wiring/plumbing in the wells with very little effort.  At the end of the day, these three points do not represent substantive critiques but are things to think about as you plan your build.

Once again, Eduard nails it with another great 1:48 scale kit of their Fw 190.  Here, the ground-attack U3 and U8 variants are well represented with the extra resin parts and great decals and markings options.  It all hits on the right points.  For those interested in adding even more detail to their second-generation Eduard Fw 190A-5, there’s also Eduard detail sets for the cockpit, engine, machine gun, landing flaps, cannon bays, and just about everything else in between.  Enjoy this one!