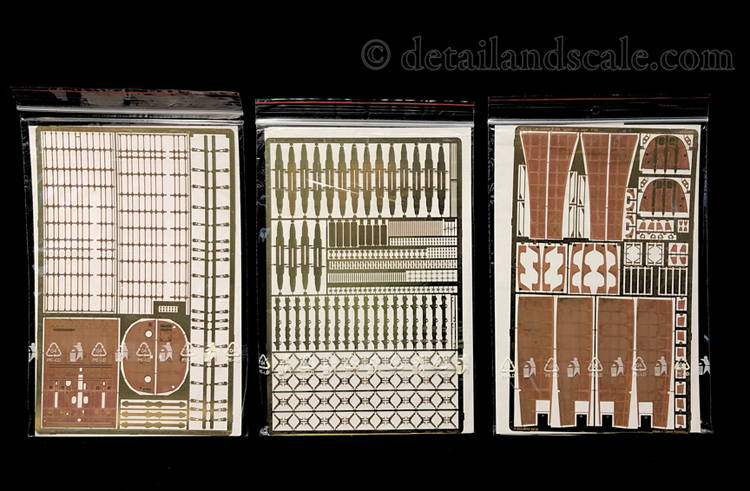 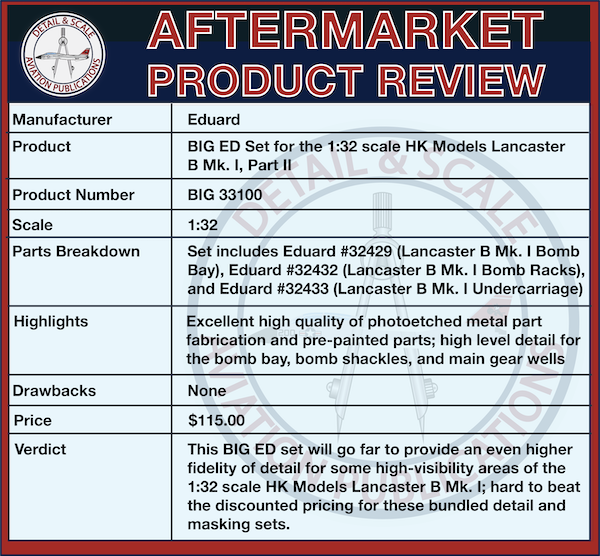 The 1:32 scale HK Models Avro Lancaster bomber made a huge splash when it was released in 2018.  It is a very big kit and filled to the brim with some excellent detail.  Eduard, naturally, released a number of detail sets for the kit, and here, we look at their second of two BIG ED sets for the HK Lancaster B Mk. I.  It bundles together (at a savings for the customer) their photoetched Lancaster B Mk. I Bomb Bay, Bomb Racks, and Undercarriage detail sets.

#32429 (Lancaster B Mk. I Bomb Bay).  This set is what I like to call Eduard’s version of “heavy metal” and consists of two frets.  Their PE frets don’t come any bigger than this, and what you get here is one whopper 8’’x5’’ sheet of PE parts and a second smaller fret containing everything else that could not fit on the primary fret sheet.  There might only be 28 parts in here, but these are big items.  The details here include the bomb bay wall bulkheads, the stingers and other details that formed the bomb bay ceiling, bomb bay door detail parts, and the distinctive stiffeners that formed the inside edges of the bomb bay where it meets the doors.  Overall, this is very impressive and provides key details to enhance the HK kit.

#32432 (Lancaster B Mk. I Bomb Racks).  It’s another heavy metal set.  Here, by my count, there are 434 parts on a single fret.  Therse’s a lot of material here.  You get parts for all of the 12 bomb shackles, and they are given very detailed treatment, coming together out of 22 pieces each.  It’s pretty breathtaking and the attention to detail is top-notch.  The bomb bay fuel tank rack is also provided, and there are detail parts for the bombs themselves (fusing spinners) that are a big improvement over the kit.

#32433 (Lancaster B Mk. I Undercarriage).  In Eduard’s parlance, undercarriage usually refers to landing gear wells, and here, one final 8’’x5’’ fret contains parts for the main gear wells for the Lancaster.  The 75 parts cover a few main gear details, but most of this set is dedicated to the inside surfaces of the main gear well doors, forward bulkhead details, and the gear well ceiling.  These are structural details, of course (wiring and plumbing is up to you), and the raised rivet head details here are particularly very well done.

In conclusion, this BIG ED provides these sets together at a lower price than if they were bought individually.  It also elevates the level of detail several degrees above what is already there – especially regarding focal points of the model such as the bomb bay and gear wells.  If you enjoy working with aftermarket detail sets, you will love this collection of sets for the great 1:32 scale HK Lancaster B Mk. I.