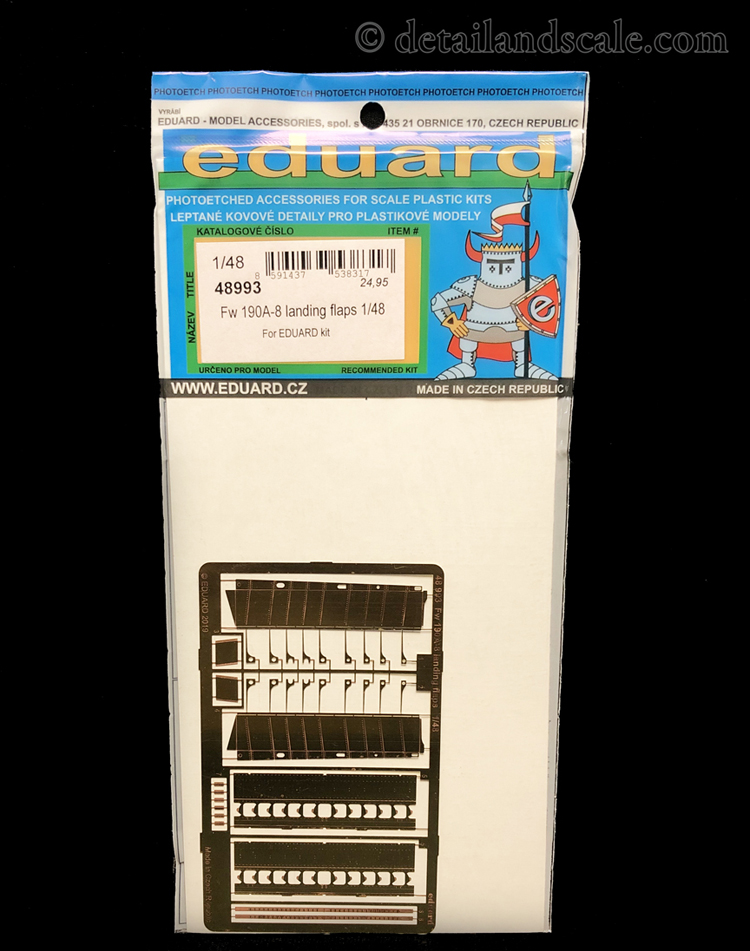 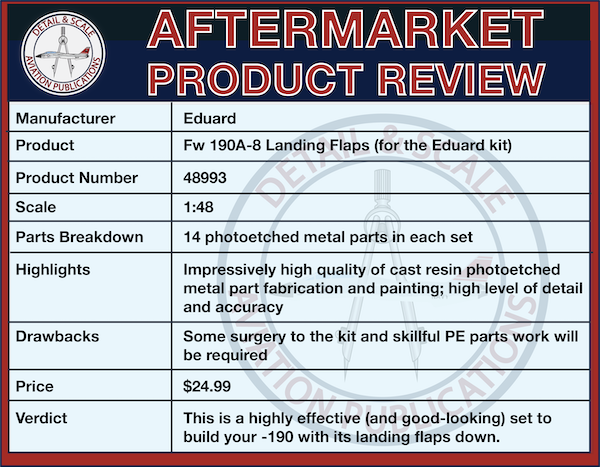 A little while back, we reviewed Eduard’s new Fw 190A-8 (which you can find HERE) and we really liked it.  One of the few things I consider as a critique of the Eduard Fw 190 family is the lack of separate landing flaps.  This is perhaps a less empirical criticism and more of a personal bias coming to light since I often really enjoy building my airplanes with their flaps, slats, and other control surfaces hanging out all over the place.  I like to represent all the complexity of the detail, structure, and engineering.  Of course, Eduard knows there are plenty of builders out there like me, and they planned for this

The Fw 190A-8 landing flaps set comes on a single fret and contains 14 parts.  The quality of parts is standard Eduard:  outstanding fidelity, quality, and accuracy.  It is really beautifully done.  The photoetched metal parts are ideal to represent the depth, scale thickness, and detail that is in the trailing edge of the inside of the wing.  While I admit that I don’t have a lot of references on 190 landing flaps, they compare just about perfectly to what I’ve seen in the past and to the 190s that I most recently photographed at the Military Aircraft Museum in Virginia Beach, Virginia.

This is not a “drop-in” detail set.  Integrating it into your Eduard A-8 kit will take some work.  There is some razor saw surgery that needs to be done on the fuselage where it meets the aft wing roots and removal of the entire lower landing flap from the kit’s lower wing.  The trickiest part of all of this involves removal of about half of the thickness of the inside upper surface of the landing flap of each upper wing half.  That’s a job for a sanding stick and watch the thinness of your trailing edge.  And of course, take your time and test fit PE Parts 1 and 2 along the way.  There’s also a good deal of folding of PE parts in this set.  I would highly recommend use of a “hold-and-fold” type tool for the job.  It might not be the most basic PE detail set ever, but it is your ticket to build your 1:48 scale Eduard Fw 190A-8 with its landing flaps deployed.