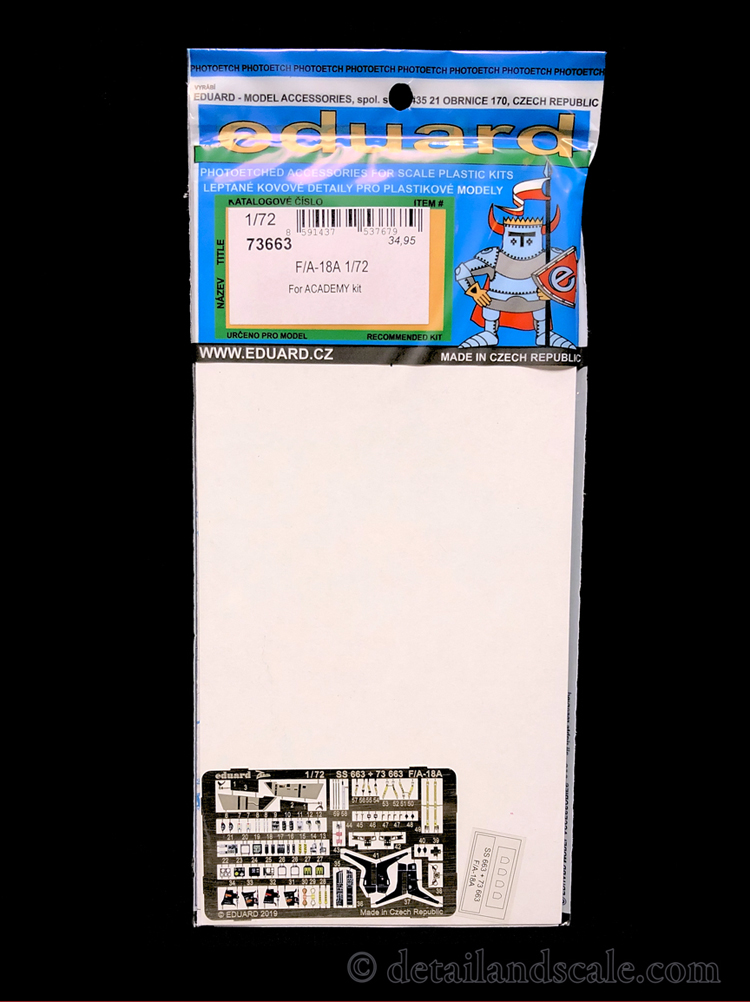 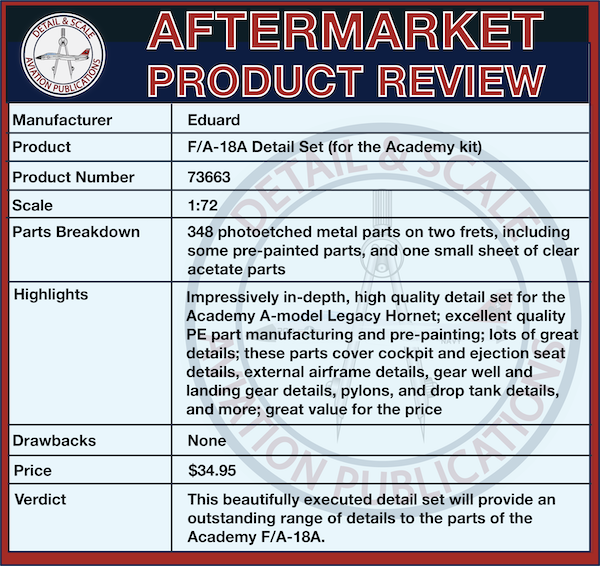 There have been plastic model kits of F/A-18s going back to the late 1970s.  However, Academy’s family of Hornets in 1:72 scale, which have been around now a little more than a decade, represent by far the best kit of the Hornet in that scale.  They feature great design, fit, and construction options.  However, there can be plenty more detail one might wish to add to your Academy Legacy Hornet.  Here, we take a look at Eduard’s detail set for the Academy 1:72 scale F/A-18A.

This set contains two frets and one small sheet of clear acetate parts.  There are 82 parts on a pre-painted fret and 266 additional parts on an unpainted brass fret.  There’s a lot metal in here, and it represents what could be called an “elite” detail set for the Academy F/A-18A.  The details captured here are really outstanding.

The pre-painted parts basically provide complete replacements for the cockpit instrument panel, side console panels, throttle quadrant, cockpit sidewalls, various handles, levers, data placards, and ejection seat details including belts.  Other ejection seat details go into minutia, such as providing the drogue chute lanyard, two styles of ejection handles, and the oxygen and anti-g suit hookups, among other features.  Canopy frame details, rear view mirrors, the aft cockpit deck, and canopy locking hooks are all there.  The pre-painted details are impressive, especially as they capture details such as the individual buttons on the MFDs and dial faces in 1:72 scale.

A lot of attention is also given to the wingtip rails, bomb rack details, and the underwing weapons pylons including major improvements to the CVERs.  AIM-9 rollerons are provided along with other missile and fuel tank details.

There’s also plenty of details for the wheel wells and landing gear.  The set includes a completely new forward nose gear well section, structural details, spars, plumbing, gear doors, and door actuators.  Lots of nose and main gear details are included, from brake lines, electrical lines, and some finer physical hardware details on the gear that Academy left out.
The Academy F/A-18A is a very good kit, and this Eduard detail set provides parts to make it a true head-turning piece of work.  This set is really comprehensive and accurate.  The only drawback is that some of the parts are exceptionally small and will be a challenge to work with.  While PE parts are not everyone’s cup of tea, folks (such as me) who really enjoy working with brass detail parts will enjoy this set immensely.