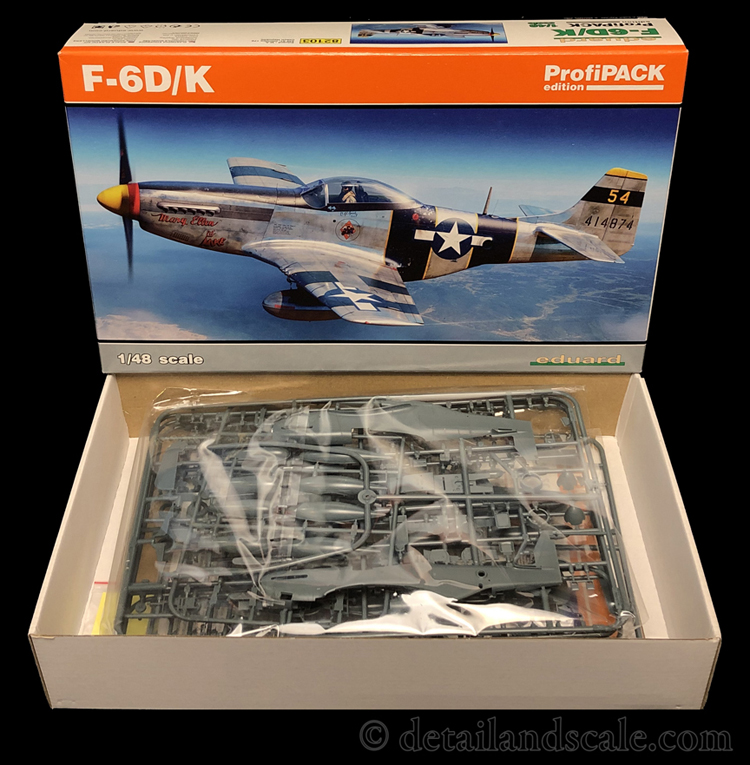 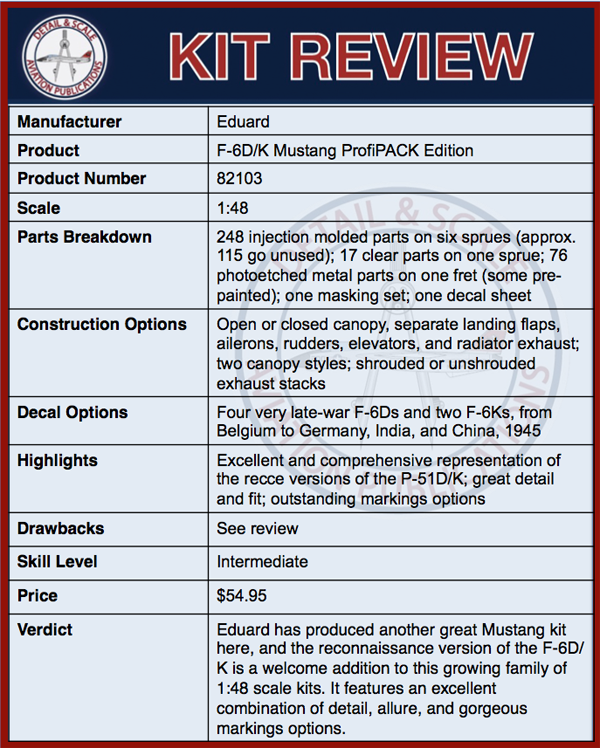 During World War II, the USAAF had the need for swift battlefield reconnaissance and mapping, and the requirement called for fast and survivable aircraft.  Some fifteen different airplanes were used in these roles, but a particularly effective recce platform for the Allies was the P-51 Mustang.  P-51s modified as reconnaissance aircraft were designated as the F-6.  Here we take a look at Eduard’s new F-6D/K ProfiPACK edition kit.

The origins of the P-51 famously resided in an early 1940 request from Great Britain for a stopgap fighter to help hold the line against the German Luftwaffe.  North American Aviation developed a completely new fighter that would be not just be easier and faster to produce but that also featured a number of revolutionary design features.  Early versions went into combat with the RAF in early 1943.  RAF Mustang Marks I and II were soon followed by the improved P-51As, Bs, and Cs operated by the USAAF and the RAF.  The definitive P-51D was fitted with a Plexiglas bubble canopy providing excellent 360-degree visibility.  The aircraft could reach approximately 440 MPH with its while its service ceiling was just below 42,000 feet.  Armament consisted of six wing-mounted .50-caliber machine guns, and underwing pylons permitted the use of range-extending drop tanks, rockets, and bombs.  P-51s saw action in the European, North African, Mediterranean, Pacific and CBI theaters.  Mustangs claimed 4,950 air-to-air kills.  In USAAF service, P-51s, with their very long range, escorted bomber formations over Europe beginning in 1943, and they operated as ground attack and close air support aircraft following D-Day.

The reconnaissance versions of the Inglewood-built P-51D and Dallas-built P-51K were the F-6D and F-6K, respectively. The camera installations were located behind the cockpit in a mostly empty section of the fuselage.  Two camera ports were added to the left side of the fuselage between the wing and the tail assembly, and another camera port was fitted aft of the radiator exhaust door on the underside of the aft fuselage.  Typically, combinations of two Fairchild K-17, K-24, or K-22 cameras were installed.  One camera proved either horizontal or oblique images and the other faced straight down.  Controls for camera operation were added to the cockpit, and nearly all aircraft had a direction-finding loop antenna on the fuselage behind the canopy.  Some 136 F-6Ds and 163 F-6Ks were produced, but an unknown number of field modifications also occurred.  Those that flew beyond 1948 became RF-51Ds, and some played a role in the Korean conflict.  The F-6D/K also retained all of its armament.  The airplane’s motto could have been “Alone, unafraid, and heavily armed.”  As such, no escort was required, and several recce Mustang drivers became aces.

Eduard’s ProfiPACK edition of their 1:48 scale F-6D/K consists of 248 parts (about 115 parts are not used in this version of the kit, including the entirety of Sprue F).  Seventeen clear parts come on one clear sprue.  It also contains 76 photoetched metal detail parts on one fret (most of them are pre-painted).  There’s also a pre-cut, self-adhesive masking set for the windscreen, canopy, and wheel hubs.  Markings for six aircraft include:

Strengths:  We’ve recently reviewed several separate issues of the Eduard 1:48 scale Mustang, and as of last week, I completed my first build of their P-51D.  Since 2019, Eduard is progressively releasing a complete Mustang family that (so far) covers the P-51D Block 10, 15, 20, and VLR (Very Long Range) Mustangs.  Now, we have the F-6D/K.

What’s new here for the F-6D/K?  Sprue E contains completely retooled left and right fuselage halves that feature the camera ports on the left and the additional access panel on the right that was used to access and maintain the cameras and the ADF antenna.  The photoetched metal set also has parts to represent the reconnaissance gear in the cockpit.  Most notable is the intervalometer that was mounted on the left side of the cockpit floor and used to operate the cameras.  Other alternate parts already on the sprues, but not used in earlier kits, come into play.  These include the bottom fuselage camera fairing, the loop antenna, and the uncuffed propellers for the F-6K.  Alternate 75- and 110-gallon drop tanks are included on Sprue J.

Beyond that, all the good things I’ve described about the basic Eduard 1:48 scale Mustang in previous reviews at detailandscale.com apply to this kit as well.  Eduard can indeed claim the “best 1:48 scale P-51D” with these kits.  To recap, surface details are very accurate.  Eduard has nailed the relatively featureless wing surfaces while rivet/fastener details on the fuselage and tail surfaces are as exquisite as they are sublime.  Fits between the fuselage halves and wings are just about airtight, and the engineering is very well done.

The cockpit features separate frames for the sidewalls, a multi-part seat, and excellent representations of the radio, battery, and fuel tank, down to the separate parts for the wiring and fuel line.  The really impressive elements here are the photoetched parts which add a considerable amount of detail and visually interesting features to the cockpit.  These include the pre-painted instrument dial faces, the gorgeous pre-painted harnesses (complete with simulated stitching details), various placards, and the photoetched throttles, trim wheel, and other parts.  In sum, the cockpit looks excellent with these detail parts.

The main gear well is the best of its kind in 1:48 scale, and it builds up from about 16 parts.  It is very rich with detail, from the textures of the parts and ribs to the fuel lines and pump details.  All that’s missing are the smaller hydraulic and electrical lines, and the builder can add those relatively easily if they wish.  There’s also a fully enclosed tail wheel well that looks excellent.  Another nice feature is a single-piece gun port section on each wing.  Unlike the Tamiya kit, for example, the gun barrels do not assemble out of upper and lower halves resulting in some tricky/ugly seam work.  Eduard’s engineering approach here is good, but the fit can be a little hard to get just right, so test fit and use slow setting super glue.  Also note that there is a blanking plate on the inside of each wing so that shell ejection ports do not open up into the deep, hollow inside of the wing for all to see.

The masking set will save a lot of time when masking the windscreen, canopy, and wheel hubs.  The exhaust stacks are great, and even though they are injection-molded, the ends are nicely hollowed-out.  Here, there’s no need for a cast resin replacement set.  The clear parts possess excellent optical quality, and the windscreen has an extended fairing around it, so gluing, masking, and painting is a very low-risk affair.

The markings options hit multiple home runs, and it was to the point where I looked up the availability of Eduard’s Overtrees version of this kit (and yes, they are available).  Eduard really knows how to capture some colorful, classic, eye-catching schemes.  “Miss Marge Sue Rebel Gal” is particularly eye-catching with its nose art and lighnining bolts on the fuselage and wings.  The same certainly goes for “Snooper,” while the clean lines and relative simplicity of “Shady Lady” and “Pack’s Hack” are also appealing.  The colors on “Genie” and “Mary Ellen Lil’ Mike” also pop.  The decals were printed in-house by Eduard, and they all look great.  I can see no technical errors in printing.  There’s also a valuable painting guide highlighting where natural metal versus aluminum lacquer-painted surfaces are found on silver P-51s.  Also, the decals are of the “wet transfer” style of decals that Eduard has recently introduced in their kits.  They are applied like any regular water slide decal, but after about 24 hours, the carrier film can be removed.

Weaknesses:  There are few substantive critiques that can be considered for this kit.  One minor issue for some folks is that if PE parts aren’t your cup of tea, the detail on the pilot’s instrument panel is really minimal.  The idea is to either use the PE parts or the kit supplied instrument panel decals.  Note that if you want to position the ailerons, rudder, and elevators in anything but the neutral position, you’ll need to remove their mounting tabs.  Also, be really careful with the thin plastic strip that separates the left and right wheel wells on the lower wing half (Part B-15).  It is pretty fragile, and in some kits, it is warped/bent inward because it is so fine.  My sample is slightly warped, but if that’s a problem in the kit you have, you won’t see it when the main gear wells doors are displayed open.  If built-up in the retracted position, a small plastic shim under the area will fix it.  The completed landing gear are a bit weak owing to very shallow mounting pins, so watch out when handling.

Eduard has produced another great Mustang kit here, and the reconnaissance version of the F-6D/K is a welcome addition to this growing family of 1:48 scale kits.  It features an excellent combination of detail, allure, and gorgeous markings options.  Of course, you can always add more detail, and Eduard has released a range of aftermarket super detail sets for their P-51Ds, including a Brassin cockpit set and camera bay/camera set for the F-6D/K.  Stay tuned here for reviews of those sets on our website and social media pages.  Even more 1:48 scale Mustangs are on the horizon from Eduard. Their RAF Mustang Mk. IV has just been released, and a sample is currently on its way to our review bench.