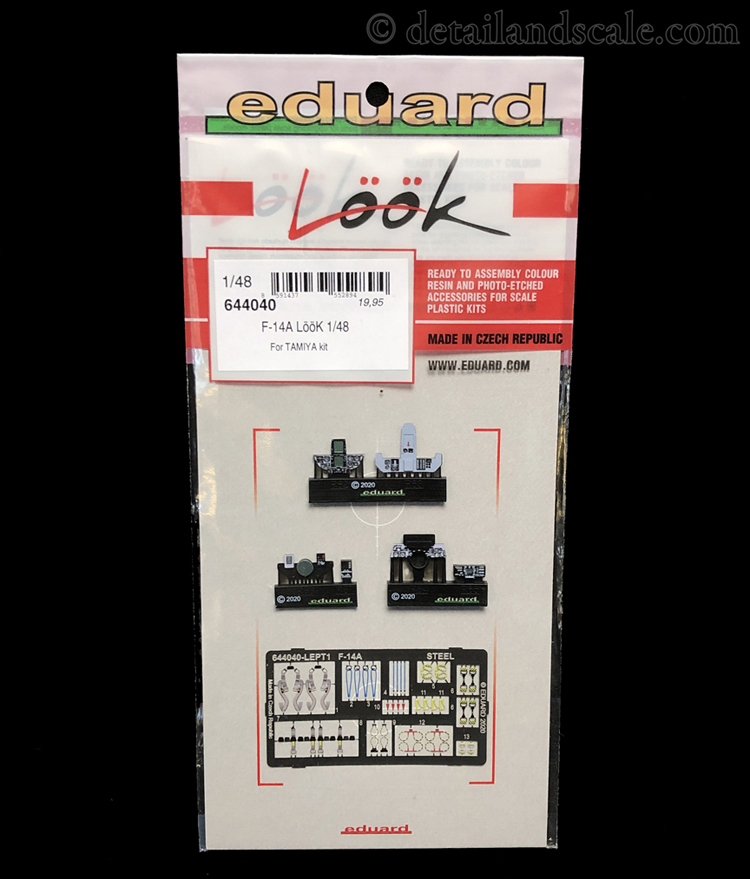 In 2018, Eduard launched an ever-expanding product line called Löök that features highly detailed, pre-painted, cast resin aircraft instrument panels.  They have now reached the 1:48 scale Tamiya F-14A Tomcat kit in their “to-do” list.  That kit ranks among the best injection-molded plastic model aircraft kit ever made, but some aspects of cockpit details are a little simplified.  This Löök set is intended to help rectify this issue.

Eduard # 644040 F-14A Löök (MSRP= $19.95) comes with six cast resin parts for the pilot and RIO instrument panels and a pre-painted photoetched metal fret containing 34 parts.   These parts are designed to drop into the kit without any extra work.  The cast resin elements are fully three-dimensional resin castings with appropriately raised instrument bezels, switches, knobs, and other details.  The precision-painted instrument dial faces are a real highlight.   The pilot’s VDI (Vertical Display Indicator) and HSD (Horizontal Situation Display) display screens, along with the RIO’s large, fishbowl-shaped TID (Tactical Information Display screen and small DD (Detail Display) screen are all painted a dark green.  The color approximates the look of these older cathode ray tube screens in a powered down state, though they could stand to be just a bit darker in my opinion.  I very much like how the RIO’s main instrument panel is broken down into two parts and how the physical TID screen comes in through the back of the part to be seated in the instrument panel assembly.  Eduard applied their distortion-free, self-leveling, clear glass treatment (I believe it is a clear gel medium) atop each dial face.  However, there’s a blemish in the RIO’s TID screen in my sample.  It looks like something or someone came in contact with that part before the glass treatment had dried.  This represents a rare production quality goof for Eduard.  I think the easiest fix would be to sand the screen surface smooth with 3000-grit Micromesh and then hit it with your favorite gloss medium, and I would suggest Mr. Color GX100.  Alternatively, a drop of Mr. Color Leveling Thinner on the surface might also do the same, since it is good at lightly and temporally dissolving that with which it comes in contact.  I am however unsure of the exact chemistry of how it would interact with Eduard’s clear gloss treatment.  Experiment with care.

A set of photoetched metal parts round out this set and contains parts for the two GRU-7A ejection seats.  These look great and contain detailed shoulder harnesses and lap belts (including stitching and even some shading/shadow effects), leg restraints, face curtain and lower ejection handles, emergency ejection seat release handles, canopy jettison handles, and more – all details for where the kit parts need help the most.

Overall, the set does a very solid job representing the early-  and mid-life F-14A instrument panels.  For the value and detail that it brings, this Löök set is also very well priced.  As is often the case, just be aware that the gray color used by Eduard is a little off for F-14 cockpit colors (a little light in its shade and a little too blue in its hue).  It is something that Tomcat experts will notice, but this may not bother the average builder.  Hopefully, one day, Eduard may consider doing an expanded set with the side console details, at the very least, to provide an accurate throttle quadrant.  Also, we hope an early-and late-life F-14D Löök set might be in the works for the Tamiya kit.  I would also think that Löök sets would go an even longer way for the older but venerable 1:48 scale Hasegawa kits (and which Tomcat fans still have many in their stashes).