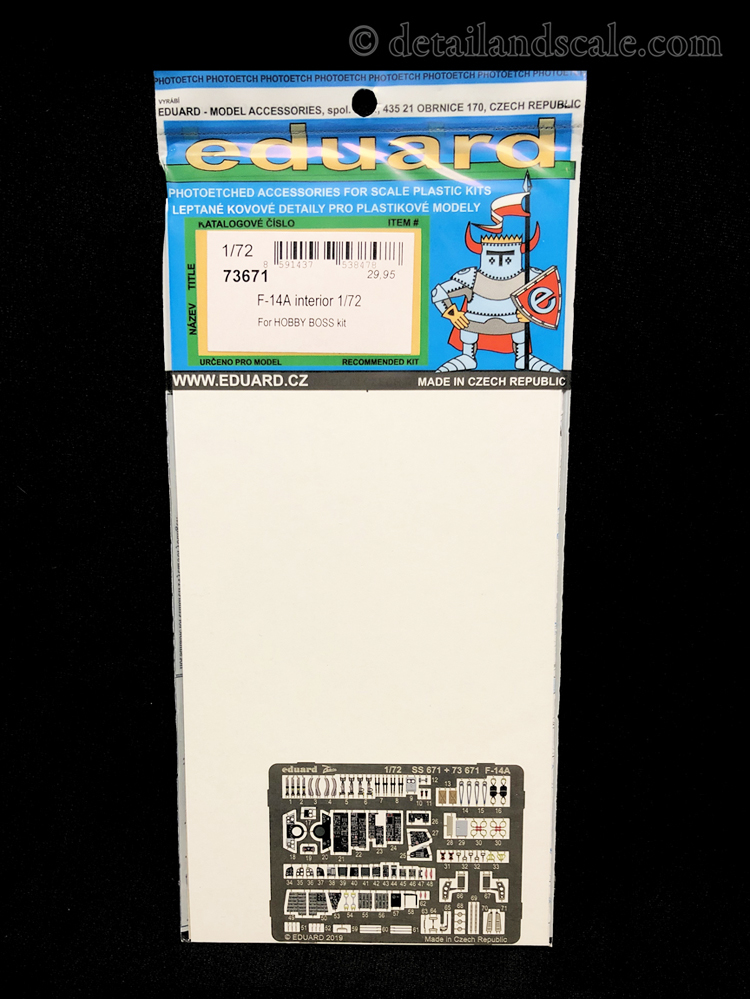 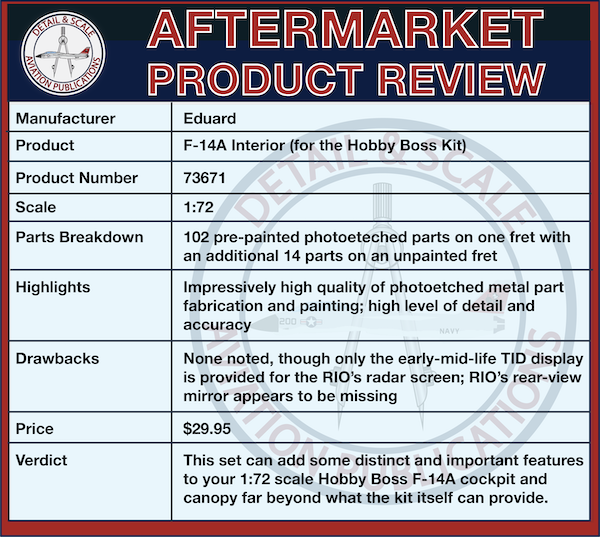 Several years ago, Hobby Boss entered in on the 1:72 scale F-14 market and released a few smaller-scale Tomcats spanning the F-14A, B, and D.  Eduard has produced a few detail sets for this kit, and in this review, we examine their F-14A Interior detail set.

Here, you’ll find two frets filled with PE parts.  The first fret is mostly pre-painted and contains a details set expressly focused on cockpit details (I think it is also available separately as a ZOOM set).  Just over 100 parts come on this single fret.  This set is designed to completely replace all the injection-molded plastic details of the Hobby Boss cockpit.  You get a complete instrument panel for the pilot and the RIO, side consoles, new rudder pedals, the pilot’s knee circuit breaker panels, the RIO’s wide array of circuit breakers in the back seat, and other bulkhead features such as the air conditioning vents.

Additionally, there’s a rather important range of enhancements for the kit’s GRU-7A ejection seats.  These include nicely shaped and pre-painted face curtains and lower ejection handles, shoulder harnesses and lap belts, parachute pack details, and leg restraints.  Not seen too often in 1:72 scale, the latter details are a really nice touch.  I’ve never been a huge fan of how Eduard represents the GRU-7A shoulder harnesses as they lay a little oddly.  They might need a little work in terms of re-shaping them.

Do note, however, that the parts for the back seat in this set represent a pre-LANTIRN equipped F-14A.  The circular TID (Tactical Information Display – a.k.a. the radar screen) is included, but there’s no PTID (Programmable Tactical Information Display) used by the RIO in conjunction with the LANTIRN pod system.  Only the very earliest LANTIRN-equipped jets used the TID that was soon replaced with the much larger and rectangular PTID when the F-14 went all-in with its strike mission late in its service career.  So, I’d say this set is good for any F-14A before the late 1990s.  Also, while the pilot’s three rear view mirrors are included, the RIO’s centerline canopy frame mounted mirror appears to be absent.

Work deliberately with some of the parts in this set.  Some of these parts are really small and require pretty careful handling when assembling.

Our verdict:  this set can add some distinct and very accurate features to your 1:72 scale Hobby Boss F-14A cockpit and canopy.