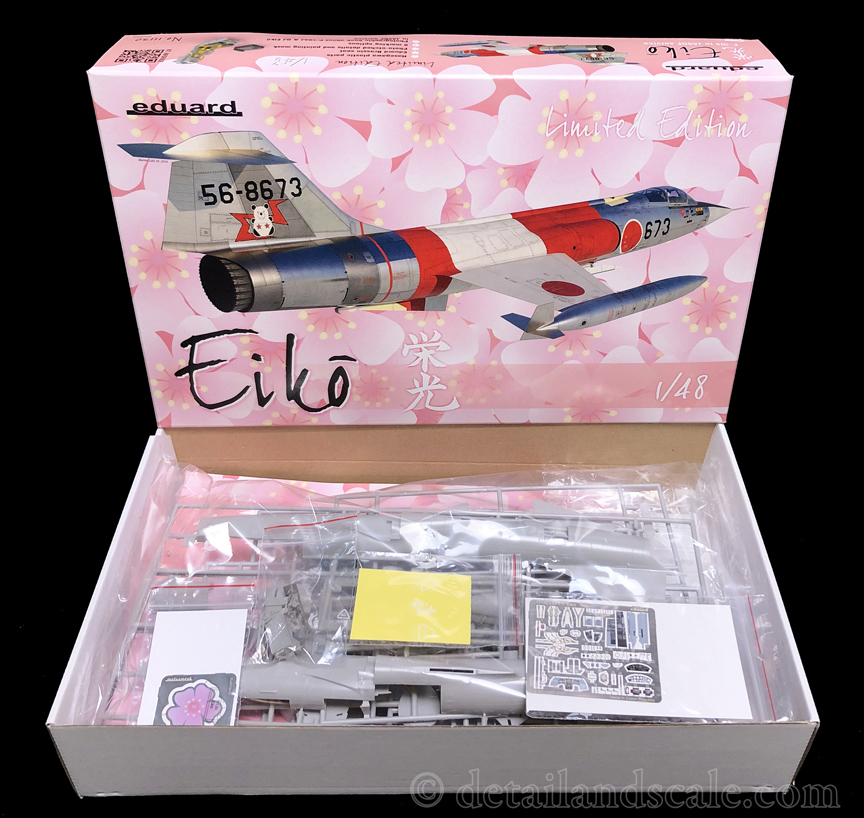 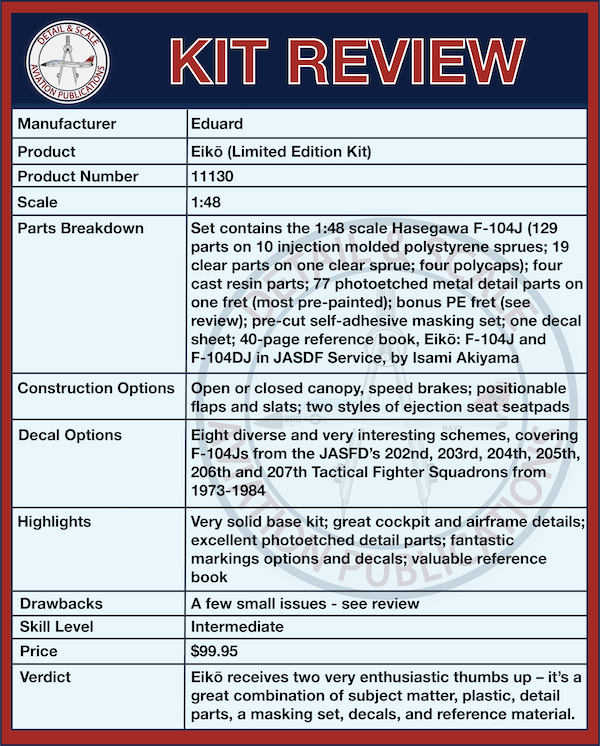 The Lockheed F-104 Starfighter is one of the legends of the early jet era.  It was defined by an innovative and sleek design, high speed, and a reputation drawn from its multiple world-beating performance records.  There have been lots of kits of “The Missile With a Man In It.”  Here, Eduard has re-boxed the venerable Hasegawa 1:48 scale F-104 kit, added a variety of detail parts, a masking set, a book, and new decals for Japanese F-104J, which was named Eikō, or “Glory,” in JASDF service.  Let’s see what Eduard has put together for us.

The F-104 needs little introduction.  It was one of the early “Century Series” aircraft that applied lessons from the Korean War to jet fighter design.  The legendary Kelly Johnson and his team created the lightest, most aerodynamically efficient airframe they could make combined with a powerful engine (the General Electric J79).  Less than a year elapsed between contract finalization and first flight, with the prototype taking to the air on March 4, 1954 at Edwards AFB.  Its high tail, unusually thin mid-fuselage-mounted trapezoidal wings, and low drag conferred Mach 2+ performance.  Between 1958 and 1977, F-104s set multiple speed, altitude, and time-to-climb records.

Originally conceived of as a fighter and an interceptor, the F-104 was hobbled by poor turning performance, propensity for high-alpha stalls, limited missile carriage, and substantial mishap record.  Following service in the USAF’s Air Defense Command, F-104s went to work in TAC (with deployments during the early days of the Vietnam War) and later in stateside ANG squadrons.  The last F-104 in U. S. service hung up its spurs in 1975 when the Puerto Rico ANG transitioned to the A-7.  Italy retired the very last operational Starfighter anywhere in 2004, marking a remarkable service life of 50 years.

The F-104G was arguably the ultimate Starfighter.  It was first developed for West Germany.  However, Japan also flew their version of the F-104G as the F-104J.  Its history with the Japanese Air Self Defense Force (JASFD) goes back to 1955 when the JASFD was looking for a replacement for their F-86 Sabers.  At first, the Grumman F-11F-1F Super Tiger had a virtual lock on the contract, but as is often the case, politics and other complicating factors got in the way.  The Lockheed Starfighter was selected instead.  The Japanese Starfighters had several JASFD-specific systems installed, including the fire control set and the early BADGE datalink system.  Mitsubishi Heavy Industries assembled the jets from production “kits” airlifted from the United States.  The powerplants were license built J79s by Ishikawajima-Harima Heavy Industries.

A total of 190 F-104Js were operated by the JASFD beginning in the early 1960s, along with 20 two-seat F-104DJ trainers.  They were named as the F-104J Eikō, or “Glory.”  The F-104s were distributed throughout seven operational squadrons and often flew the “Quick Reaction Alert” mission defending Japanese airspace from unwelcome visitors such as Soviet Tu-95s.  The F-104J also served in an aggressor role, teaching dissimilar air combat training as the Eikō may well have been the best dogfighting F-104 of all time.  Japanese pilots inventively disengaged the altitude control system and locked the flaps down during ACM training engagements below 350 knots.  This allowed them to competently fight against the otherwise more agile F-4EJ and F-15J.  They also installed basic flare dispensers on the inside of the Eikō’s speed brakes.  By 1986, the JASFD F-104 fleet started to draw down.  Some went back to the U. S.  and some were sold to Taiwan.  Yet others were converted into unmanned aerial targets drones for live-fire missile training exercises.  The last of these UF-104Js was shot down in 1997, bringing to a close the era of the Eikō.

Eduard’s 1:48 scale Eikō Limited Edition kit set contains the Hasegawa F-104J kit (129 gray polystyrene parts on 10 sprues, 19 clear parts on one sprue, and four polycaps).  In addition to that, Eduard has included four Brassin cast resin parts (a new ejection seat), 77 photoetched metal parts on one fret (nine of them are pre-painted), and a “bonus” pre-painted photoetched metal cherry blossom logo.  Also, there a full-color, 40-page book on the F-104J by Isami Akiyama included.  The instruction booklet organizes the build over nine pages.  Markings for eight Eikōs are provided:

Strengths:  Hasegawa’s F-104 kit family debuted in 1997 and today has been issued in 47 different boxings (and counting) along with several re-boxings by Revell of Germany and Eduard.  A lot has been said about the kit and I won’t belabor its many virtues and few vices too much, but…

The Hasegawa 1:48 scale F-104 has garnered a very strong reputation for itself.  It is very well detailed, inside and out.  The recessed surface details are really gorgeous.  The cockpit and ejection seat detail is among the best that Hasegawa has done.  Landing gear wells, landing gear, and the afterburner nozzle are all also very nicely detailed.  While Kinetic has been releasing very nice and far newer 1:48 scale F-104 kits (see our review HERE) the older Hasegawa -104s are still solid kits and I still have all of mine in the stash.  They’re not going anywhere.  However, the wings and horizontal tail (the stabilator) are a little undersized by a few millimeters and also feature some overdone rivets.  Keep a watchful eye out for some ill-placed ejection pin markings.  Overall, these issues are all manageable and not huge sins for the majority of builders.  Still, anyone afflicted with “advanced modeler’s syndrome” may want to get the very impressive DACO Products F-104 Starfighter Improvement and Completion Set for parts that fix the wing/stabilator issues (and this set offers yet additional parts for further details).  Bottom line: Eduard has very done well using the Hasegawa plastic as the base kit for this limited edition offering.

The special items in this limited edition set include a brand-new Lockheed C-2 resin ejection seat (consisting of four parts with two styles of seat pads).  The kit seat is nice, but this resin replacement is a major upgrade in terms of detail (and see below).  The bottom of the ejection seat rails was warped in my sample (and probably, many other kits, too) as it is a very fine casting.  However, those warped rails bend back into perfect positioning when they slide down onto the back of the ejection seat.  Problem solved.

The photoetched parts are really impressive and will add a great deal of detail and visually interesting features to the kit, especially in the cockpit.  You get PE parts for a new instrument panel, side consoles, rudder pedals, various knobs and big switches, canopy sills, and internal canopy frame, rear view mirrors, and other small details.  Exterior details are included too, but are mostly limited to the AoA vanes, side pitot probe, and the under-fuselage three-bladed antenna.  There’s also complete set of shoulder harness and lap belts for the C-2 ejection seat.  At least in your reviewer’s opinion, that is the best way to do belts in scale.  For the C-2 ejection seat, that’s especially true with its very complex netting-style restraints.  Additionally, the pre-painting here is executed with exquisite detail, right down to very fine stitching details that you have to squint just a little to fully appreciate.  There’s also a small clear film parts sheet that will nicely simulate the HUD/gunsight glass (and a spare is provided should you need it).  The pre-painted photoetched cherry blossom part “with complements” etched on the fret is a pleasant little touch and will look nice next to the completed model, especially if it is placed on a display base.

The masking set will save a lot of time by providing very precise and sharp pre-cut self-adhesive masking for the compound curves on the windscreen, the canopy, and the wheel hubs.  I use Eduard masking sets a lot and I am a big fan.  Lately, anything that can help save time is good!

On top of all these features, this limited-edition kit has some top-flight markings options.  They are all outstanding choices for the scale modeler, as they are quite interesting, colorful, and eye-catching.  The JASFD, you might say, were painting their jets in exotic aggressor color schemes before it was cool.  These markings have a great appeal, from the overall black scheme (!) to the diverse multi-color or high-viz paint jobs adorning the other aircraft represented here.  You may have a hard choice figuring out which scheme to choose.  The decals come on one very large sheet (including an exhaustive set of airframe stencils).  Eduard printed it all in-house, and the decals all look great. I can see no technical errors in printing.

The final item in this set is an excellent 40-page reference volume, Eikō: F-104J and F-104DJ in JASDF Service, by Isami Akiyama.  It was published by Eduard and holds up to their excellent quality standards for books in terms of production and content.  Written in English, the book contains a short introduction about the aircraft and its service history, a very interesting and lengthy interview highlighting the career and service of the Eikō with COL Naoyuki Masuda, one of Japan’s well-known F-104J drivers.  The rest of the book is filled with great color photos and color profiles of F-104Js and DJs over the years accompanied by very detailed and informative captions.  The book naturally includes the jets featured on the decal sheet.  F-104 fans will really enjoy the book, and it provides a great reference for aircraft configurations, paint schemes, weathering, and more.

Weaknesses:  I cannot offer any major substantive critiques of this offering.  One minor issue: where’s that set of chaff and flare dispensers on the inside of the speed brakes?  It appears to be missing.  Also, the very delicate leg guards on the cast resin ejection seats were damaged – the right one broken off and the left one bent and cracked.  These are easily repaired, however.

Eduard has done a really nice job with their limited edition set Eikō.  They’ve done justice to the JASDF in more ways than one, and a wide range of scale modelers will really enjoy this offering. It combines a great kit of the F-104 with excellent cast resin and photoetched metal detail parts, a masking set, great markings options for eight jets, and a book on the Japanese F-104.  It may be pricey, but I’d argue that the value inside the box is worth the price of admission.  Of course, Eduard also produces additional detail sets for the 1:48 scale Hasegawa F-104 that are worth looking at, and if you’re still looking for markings options, check out the recent set of JASDF F-104 decals produced by fündekals.  Two very enthusiastic thumbs up for Eikō.  Enjoy!