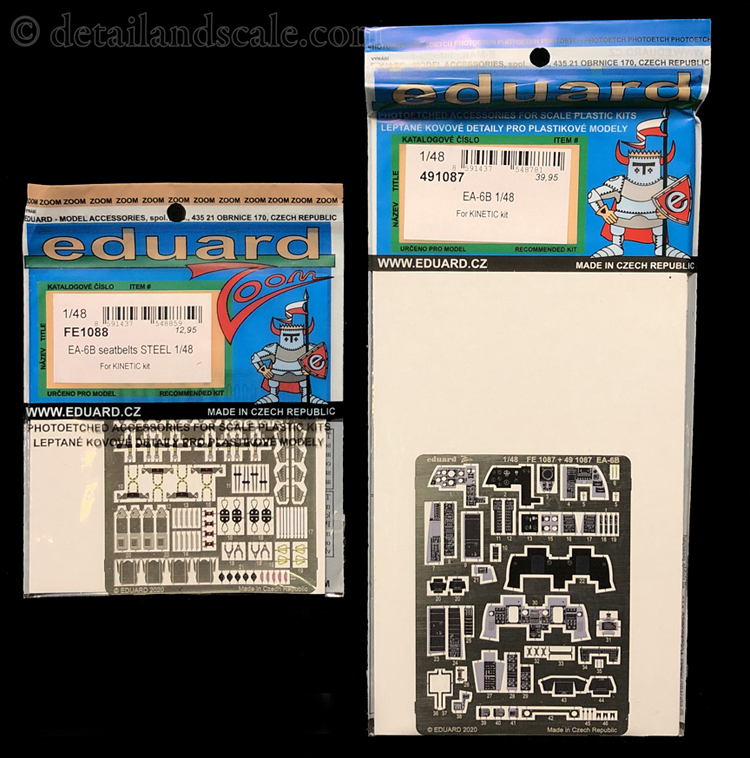 The Grumman EA-6B Prowler served as the front-line electronic warfare aircraft for the U. S. Navy and Marine Corps over a 48 year-long career.  From Vietnam to the Persian Gulf and Afghanistan, the highly versatile Prowler jammed everything from the most powerful of hostile radars to IED transmitters, intercepted signals intelligence, and destroyed enemy SAM sites with HARM missiles.  Kinetic Model Kits released their first 1:48 scale EA-6B a few years back, and it has also appeared in a few subsequent boxings.  The Kinetic Prowler might have some flaws, but it certainly outshines the classic Monogram kit from the early 1990s.  Here, we take a look at two Eduard detail sets for the Kinetic EA-6B.

The second set is Eduard’s EA-6B detail set (# 491087; MSRP: $39.95).  This set is far more extensive, and is largely intended to replace all the kit’s primary plastic cockpit detail.  There are two frets in the packaging.  The first fret is mostly pre-painted and contains 58 parts.  These items cover the entire front and rear cockpit instrument panels, side consoles, center consoles, and pilot’s throttle quadrant.  The detail here is excellent and even captures the subtle things, such the padded top edges of the ECMO-3’s and -4’s screens.  These parts appear to be quite accurate for the early ICAP-I configuration.  While it could also pass, mostly, for an ICAP-II cockpit, these parts definitively do not represent an ICAP-III cockpit.  Make sure the version of Prowler you are working on matches the cockpit configuration.  The instrument dial faces have also been treated with Eduard’s “raised glass effect.”

The second fret in this set is unpainted and provides an additional 90 parts. These cover cockpit tub details, instrument shroud items, some wiring, the pilot’s rudder pedals, and a veritable plethora of detail parts for both canopies, the cockpit sills, centerline canopy details, and the aft cockpit rear bulkhead.

Overall, both of these Eduard photoetched metal detail sets are superb.  The detail and accuracy are outstanding, parts manufacture is excellent, pre-painting is sharp and down to stitching and shading effect on the seatbelts.  These sets provide details for the EA-6B’s prominent cockpits that are far superior to that of the kit.  I’m planning a Kinetic Prowler build in the near-term, and both of these sets will be used in that project.