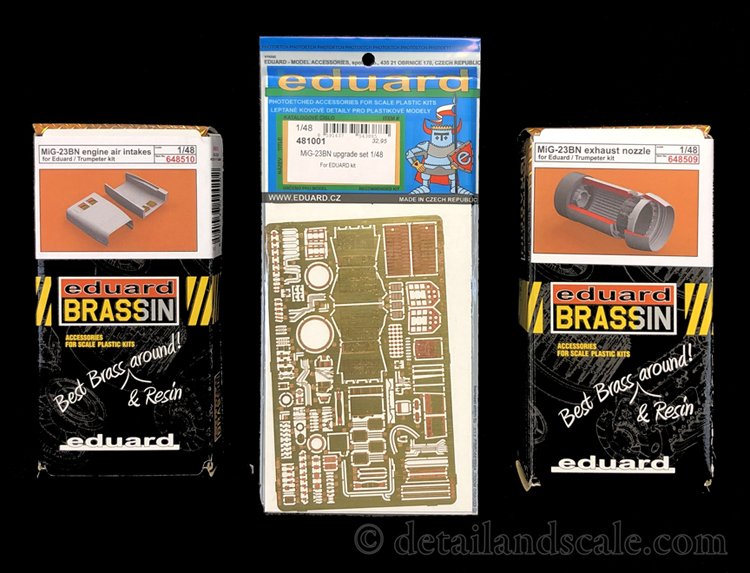 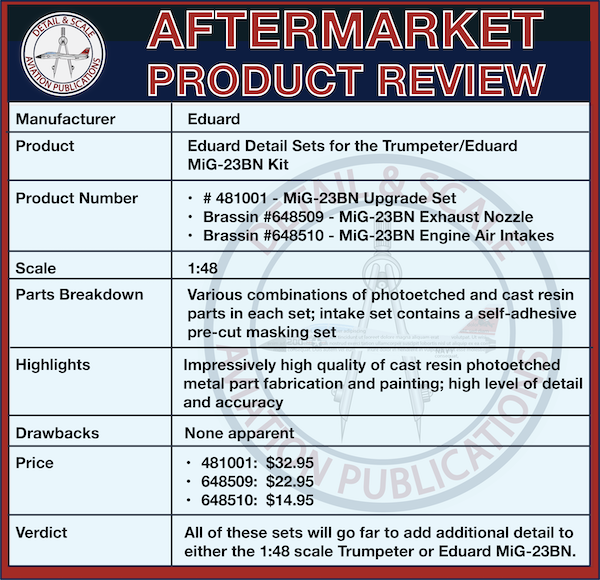 The swing-wing MiG-23BN (NATO code-name “Flogger-H”) was manufactured in the former Soviet Union between 1973 and 1985.  A few served with Frontal Aviation Regiments, while most were exported to various Soviet client states.  It was based on the MiG-23B but was fitted with the later R-29-300 powerplant and other minor interior and exterior variations.  Trumpeter produced a MiG-23BN kit that Eduard recently re-boxed in their own set.  Here, we take a look at one photoetched detail set and two Brassin sets designed to bring a lot more detail to this kit.

Eduard # 481001 – MiG-23BN Upgrade Set:  This single fret of unpainted photoetched metal parts features 143 parts (some of which are really quite small!) to further outfit your 1:48 Eduard/Trumpeter MiG-23BN (and a lot of these parts can be used on the MF as well).  Here, you get a diverse range of enhancements, from cockpit ejection seat rails, the cockpit sill, canopy details, multiple additional detail parts for the nose gear, a wealth of detail parts for the nose gear well, lots of airframe details such as vents and antennas, the very important intake boundary layer splitter plates, speed brake interiors, afterburner flame holder, and more.

Eduard Brassin #648510 – MiG-23BN Exhaust Nozzle:  Looking at my reference photos of the back end of a Flogger, Trumpeter’s -BN kit exhaust and engine nozzle is again somewhat simplified and inaccurate.  This set contains seven cast resin parts that are mind-blowing.  This is probably the best exhaust nozzle set I’ve seen Eduard produce – and they’ve done some really excellent work in the past.  The detail is exquisite, from the intricate corrugated surfaces of the afterburner can to the back end of the final stage compressor face, flame holder, fuel injection ring, nozzle actuators, and the engine nozzle itself.  This set is designed to drop right into the kit.  It is gorgeous.

Eduard Brassin #648510 – MiG-23BN Engine Air Intakes:  Arguably, the shape of the kit intakes is a bit off, especially in its forward cross-section.  This set is a drop-in correction and replaces the kit intakes.  There are two cast resin parts (single piece intakes) complemented by eight photoetched metal parts on one fret.  It is as simple as it is effective, and the resin casting here is just flawless.

Individually, any one of these sets will bring some very nice additional detail to your 1:48 Eduard/Trumpeter MiG-23BN.  Used together, they will significantly enhance the level of detail and accuracy in this kit.

Sincere thanks are owed to Eduard for the review sample.  You can visit them on the web at http://www.eduard.com and on Facebook at https://www.facebook.com/EduardCompany.