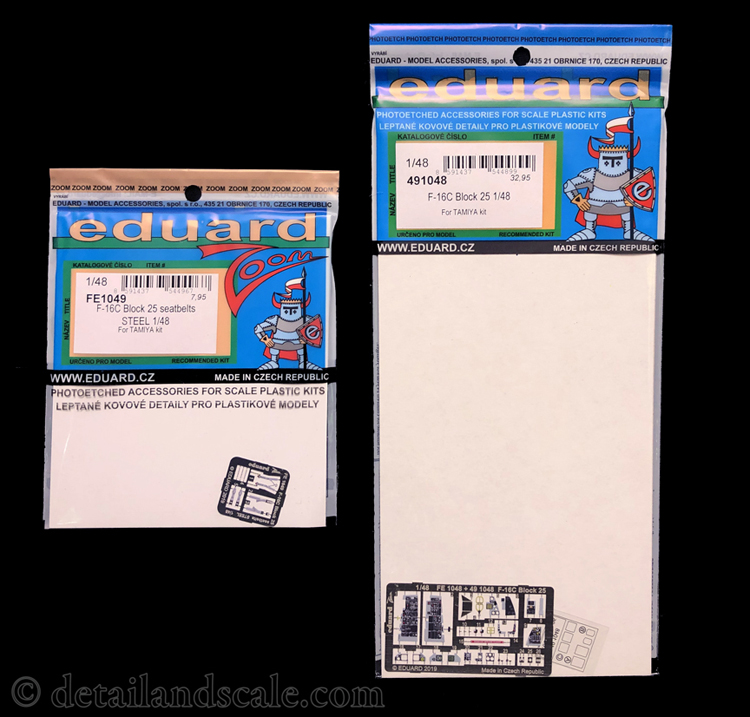 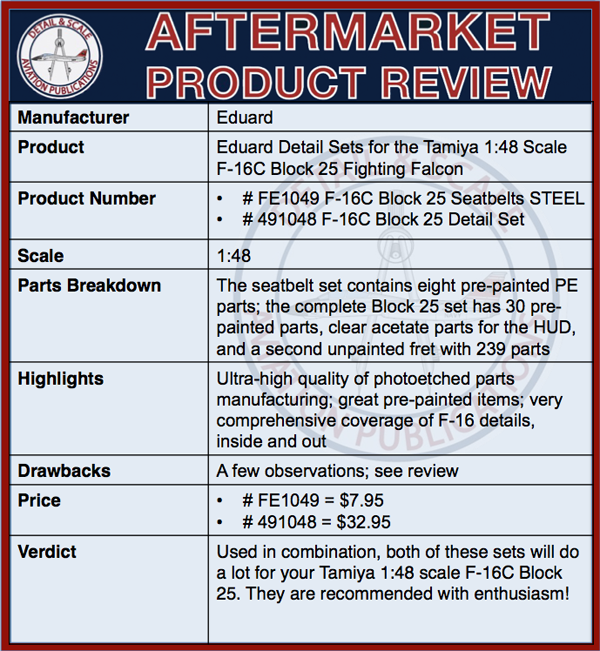 Tamiya’s 1:48 F-16 series of kits have been around for more than a decade, and they are absolute gems.  They continue to rank as some of the best kits Tamiya has ever produced and still represent the best F-16s in 1:48 scale.  Here, we take a look at two detail sets for the F-16C Block 25 issue of this kit.

Eduard # FE1049 F-16 Block 25 Seatbelts STEEL:  The kit contains a very good ACES II ejection seat, but the shoulder harnesses and lap belts will fall short for many scale modelers as they are provided as decals.  This set remedies that problem by providing eight pre-painted photoetched parts that are far superior to any decal.  Further,  I would argue that separate belts are always the most realistic way to go.  The pre-painting is gorgeous, right down to stitching details.

Eduard #491048 F-16C Block 25 Detail Set:  This rather comprehensive detail set contains one pre-painted color fret containing 30 parts and one sheet of two clear acetate parts for the HUD glass.  You get a complete cockpit instrument panel, both MFDs, and full side console replacements.  Other unpainted parts include the HUD frame and rudder pedals.  Eduard’s usual high level of detail is seen in every part in this set, from the precision-painted instrument dial faces with the raised clear surface effect to various warning indicator panels, the arrays of switches, knobs, and other details.

A second unpainted fret consists of a whopping 239 parts.  There’s a lot here!  More than 60 of these additional parts alone provide the inside surfaces of the afterburner nozzle and look a whole lot better than what is provided in the kit.  You also get a really excellent replacement flameholder.  Additional cockpit details are provided, from the various ejection seat details to the to the ejection seat frame, the data recorder behind the ejection seat, the cockpit sill and canopy locking lugs, aft canopy gasket seal, sidewall details, the armrest, and the “spider” canopy actuator device.  External details are also provided covering various grills, the avionics cooling vent, the face of the M61 cannon, really nicely done static wicks, and drop tank and AIM-9 details such as the missile hangars to the rolleron assemblies.  Perhaps most important are the “beef-up plates” absent in the kit.  Different blocks have different plate configurations, and this set inlcudes the reinforcement plates.  Such plates were used on the Block 25, Block 30, and Block 32 jets.  Here, the plates for the Block 25’s forward vertical stabilizer root are provided, but NOT the large wing root plates.  Other plates are on the frets, but they are for Block 40 and higher F-16Cs.  Don’t use them on a Block 25 jet.

Used in combination, both of these sets will do a lot for your Tamiya 1:48 scale F-16C Block 25.  I’ll be using them both when I build this kit!