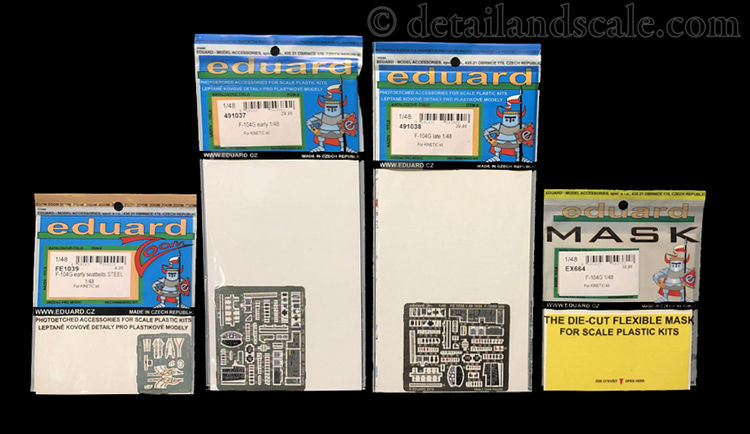 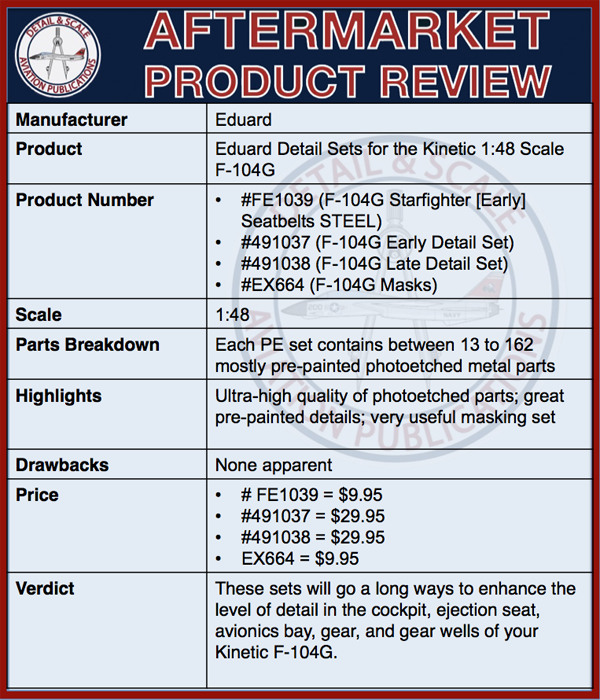 In 2019, Kinetic launched a new line of 1:48 scale F-104 Starfighter kits, Eduard has also issued a few sets of their own to improve on the kit, and here we take a look at three photoetched metal detail sets and a masking set. 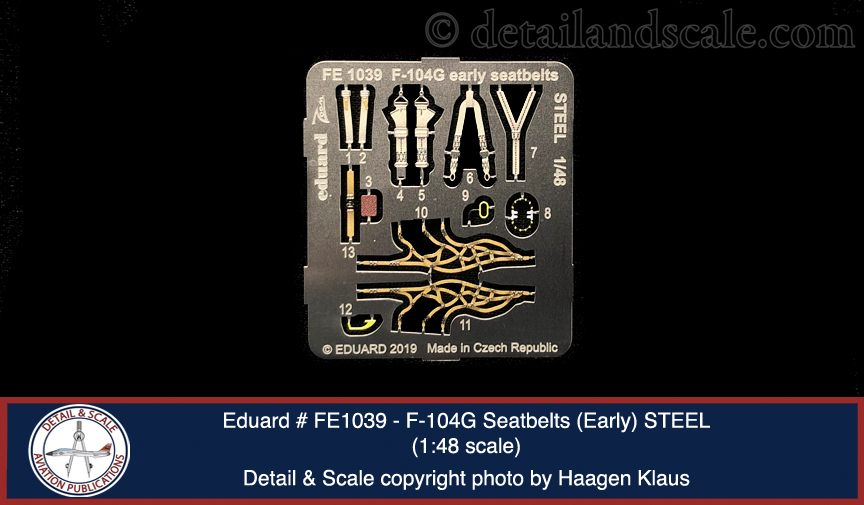 Eduard #FE1039: F-104G Starfighter Early Seatbelts STEEL:  in the F-104’s early service life, it was equipped with the Lockheed C-2 ejection seat that had been standard in previous Starfighters. The C-2 seat had a complex harness configuration and a netting or mesh system on the on the sides of the seat that deploy during an ejection to help keep a pilot’s arms from being drawn into the airstream. This set provides all these details in the form of 13 pre-painted photoetched metal parts, including the ejection handle and the prominent manual foot cable-cutter ring on the right side of the headrest. The pre-painting is rather stunning, complete with very fine stitching details and some shading effects.

Eduard #491037 F-104G Early: The kit cockpit is not too bad, but this detail set goes way beyond the detail in the plastic parts. Here, you get 130 parts on a (mostly) pre-painted fret and 32 additional parts on an unpainted fret.  The pre-painted parts provide complete replacements for the instrument, side console panels, rudder pedals, ejection seat leg guards, throttle quadrant, various handles, levers, cockpit sill, rear view mirrors, the avionics boxes behind the cockpit, and lots of data placards. The pre-painted details are really gorgeous, and the individually painted dial faces look quite accurate and have been treated with the Eduard “raised dial” effect. The second PE fret has a lot of details for the open avionics bay door, other various cockpit details, landing gear brake and electrical lines, landing gear well plumbing, and landing gear well door details.  It is most impressive! Just be careful with some of the smallest parts. They are really tiny and demand a great deal of deliberate care when working with them.

Eduard #491038 F-104G Late: this set for the late F-104G is almost totally identical to #491037, except that the configuration of the instrument panel has been reworked slightly to reflect the reconfigured instrument positions in the late model version of the aircraft.

Sincere thanks are owed to Eduard for the review sample.  You can visit them on the web at http://www.eduard.comand on Facebook at https://www.facebook.com/EduardCompany