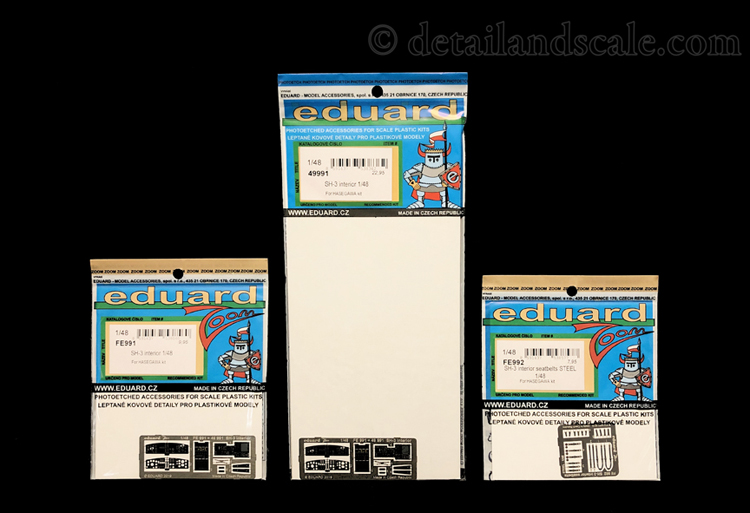 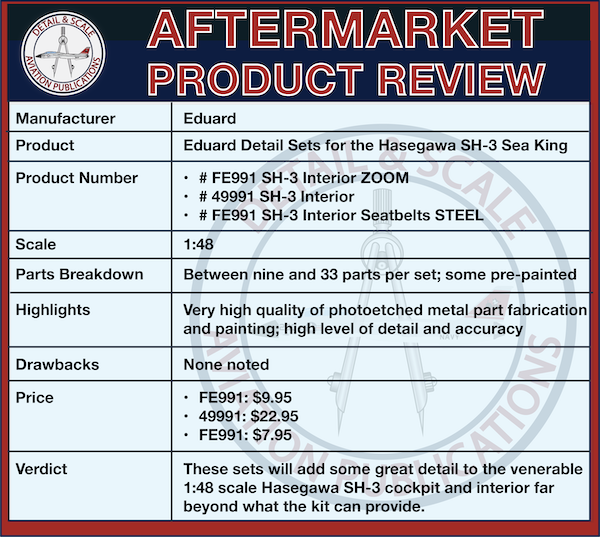 In 1992, Hasegawa released its first 1:48 scale SH-3 Sea King kit.  A good SH-3 was long overdue in 1:48 scale at that time, and I remember buying it and building it as soon as it came out.  It’s still the best Sea King in any scale.  In 2019, Eduard revisited this venerable kit and released a series of detail sets for the Hasegawa Sea King.  Here, we take a look at three of them.

# FE991 SH-3 Interior ZOOM.  By today’s standards, the kit cockpit is okay, but still, could be a lot better.  Here, you’ll find a single pre-painted fret with nine parts.  You get a complete instrument panel for the pilot, new side consoles, a center console, and the overhead centerline control panel.  The quality and detail of these pre-painted parts are excellent.  The dial faces also have been treated with Eduard’s “raised glass” effect.

# 49991 SH-3 Interior.  This is a more complete interior set that includes the same instrument and control panel parts described in the ZOOM set above, but it also features another 33 parts found on a second, unpainted PE fret.  These parts provide the rudder pedals, some additional cockpit and seat frame details, and features that are just on the other side of the open cockpit doorway.  These elements are just on the inside of the door, far enough back that you can just see them.  Note: this set does not provide for anything further aft regarding the Sea King’s interior.

# FE991 SH-3 Interior Seatbelts STEEL.  The kit’s pilot and co-pilot seats have rudimentary belts and harnesses, but they can leave a lot to be desired for today’s scale modeler.  This set provides 20 pre-painted parts for replacement harnesses and lap belts.  These amount to about nine parts per seat, and the remaining two belts are used to detail the jump seat visible just beyond the cockpit doorway.

Overall, these sets can add some distinct and very accurate features to your 1:48 scale Hasegawa SH-3 cockpit and interior.  When I build mine, you’ll see these as part of the project.