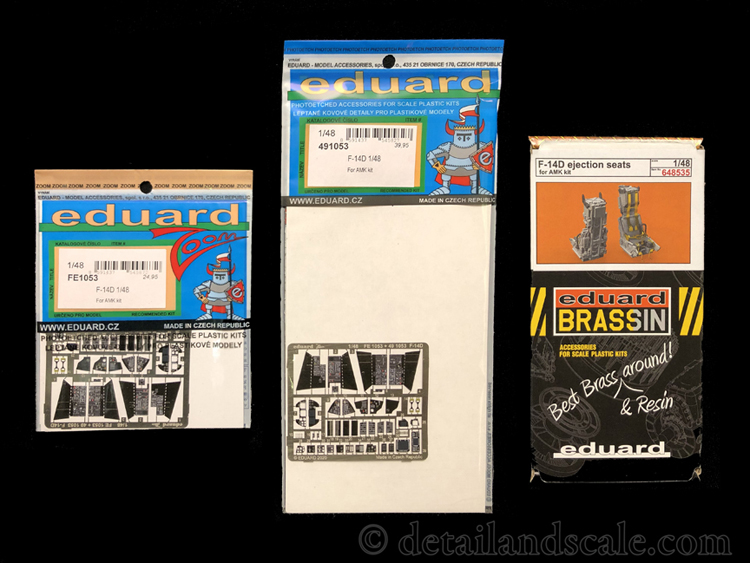 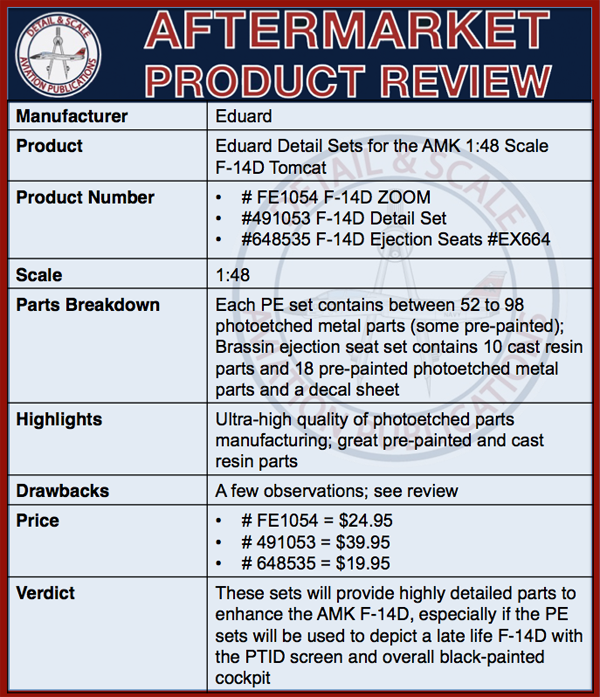 Not long after AMK released their 1:48 scale F-14D kit, Eduard started to offer detail sets for this kit.  Here, we take a look at three of them: two photoetched metal detail sets for the cockpit and one Brassin detail set containing the ejection seats.

Eduard # FE1054 F-14D ZOOM:  For those scale modelers who are looking to avoid a lot of detail painting but wish to have a great deal of visual detail in their AMK F-14D cockpit, this ZOOM set is likely for you.  It contains a single pre-painted photoetched metal fret with 46 parts.  Here, one will find complete cockpit instrument panel and side console replacements for the pilot and RIO.  The fidelity and precision of the pre-painting is very impressive and accurate, from the precision-painted instrument dial faces with the raised clear surfaces atop the instrument dials, to various warning indicator panels, the arrays of switches, knobs.  Even the RIO’s circuit breaker panels are provided, the button details of which are very finely done.  There are also various handles such as the gear selector level, tailhook lever, and canopy jettison handles.  Two items related to a single point, however:  ONLY the large PTID screen is included, and that large screen for the RIO was only introduced in the late 1990s and early 2000s in the F-14D.  All remaining F-14Ds had PTIDs installed by 2004.  Further, the entire cockpit is “blacked out,” as later-life F-14Ds had most of the cockpit, such as sidewalls and control panel edging, painted black to accommodate the use of night vision goggles which began to work their way into the F-14 community around 1994.  The PTID and black paneling together mean that this set can only be used to represent a rather late life F-14D.

Eduard #491053 F-14D:  This is a more expansive detail set that features the same cockpit detail parts contained in # FE1054, and also includes 52 additional parts on a second, unpainted fret.  This second fret has additional cockpit parts including the side paneling, air conditioning vents, the RIO’s intercom systems pedals, the boarding ladder, air condition intake vents, chaff and flare dispensers, and a few other sundry details such as the inside surfaces of the leading-edge wing slats and afterburner flame holders.  The kit has rather terrible looking and very inaccurate raised low-voltage formation light frames, and this set has some far more delicate PE metal replacements for when you sand down those monstrosities.  Just note that while the parts here are all excellent, there is one mistake.  The pilot’s center rearview mirror was deleted in the F-14D to accommodate the addition of the head-up display.  Eduard includes the centerline mirror in error here, but it’s elementary to remove it from Part #48.

Eduard Brassin #648535 F-14D Ejection Seats:  The kit ejection seats are okay, but many scale modelers might wish to add even more detail especially when it comes to the ejection seats.  That’s where this Eduard Brassin detail set provides drop-in replacements.  This set contains parts for two seats with 10 cast resin parts and 18 photoetched parts on a pre-painted fret.  These are gorgeous representations of the Martin-Baker Mk. 14 NACES seats.  They are very accurate, down to the wiring for the ejection seat computer module, the seat’s thermal batteries, and other subtle details.  The seat cushion and the G-suit/breathing oxygen hook-ups are separate.  The pre-painted shoulder harnesses, lap belts, leg restraints, and ejection handles look great.  The differentially sized canopy breakers for the pilot and RIO’s seats are provided as separate cast resin parts, and once free from their casting runners, snap in seamlessly to the forward headrests.  Especially important here, at least to me, are the PE harnesses and belts.  There’s no other way to do belt details better, and they are light-years superior to the kit supplied belts which are mere decals.  Still, this set essentially omits the parachute risers and the prominent SEWARS cartridges.  To realistically pose the shoulder harnesses, the risers must be added which pull up and shorten the harnesses on both sides.  This set also features a small decal sheet with all the ejection seat warning and maintenance stenciling to complete the look of the Mk. 14 seat.