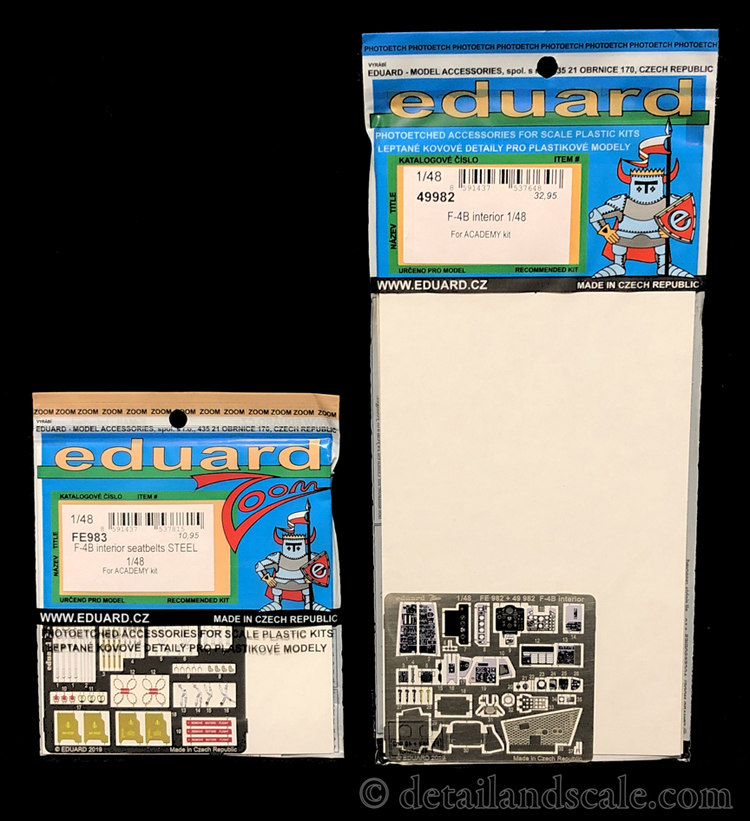 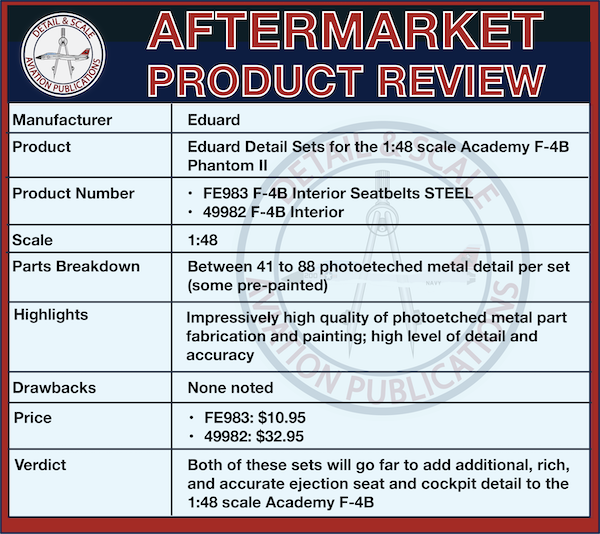 The F-4B was the first operational incarnation of the legendary Phantom II for the U. S. Navy.  There have been many kits of the Phantom in 1:48 scale, but only a few of the F-4B.  In 2012, Academy’s excellent F-4B unseated the 1983-era Hasegawa F-4B as the best of its kind in 1:48 scale.  Here, Eduard has re-released detail parts for the Academy F-4B.  Let’s check out what they’ve got for the cockpit.

Eduard #FE983 F-4B Interior Seatbelts STEEL:  the kit ejection seats are really quite good, but there’s always the possibility of adding even more detail.  Here, this ZOOM set provides 41 pre-painted parts for the shoulder harnesses, parachute risers, two styles of seat cushion, face curtain ejection handles, lower ejection handle, and three optional Remove Before Flight tags you can use to display the seat in the SAFE configuration.  The detail here is fantastic, down to the stitching details on the belts and the separate D-rings.

Eduard 49982 F-4B Interior:  this set has pretty much everything you need for the cockpit.  It features two frets.  One is mostly pre-pained with 40 parts.  Here, you get complete replacements for the pilot and RIO’s instrument panels and side consoles.  There are also sidewall details, handles, and other features.  Again, the pre-painting is exquisite, with the smallest of details represented with remarkable clarity.  The dial faces are also treated with Eduard’s “raised glass effect.”

The second fret in this set is unpainted and has 48 parts.  The majority of these parts cover the canopy frames and cockpit sills.  There’s also a few additional cockpit parts, rudder pedals, and the rear-view mirrors for both the pilot and RIO.

Either of these photoetched metal detail sets will add some great features and depth of detail to your 1:48 scale Academy F-4B.  In combination, they will really elevate your F-4B’s ejection seats and cockpit build in very important and noticeable ways.  When I build this kit, both of these sets will be incorporated into the project.