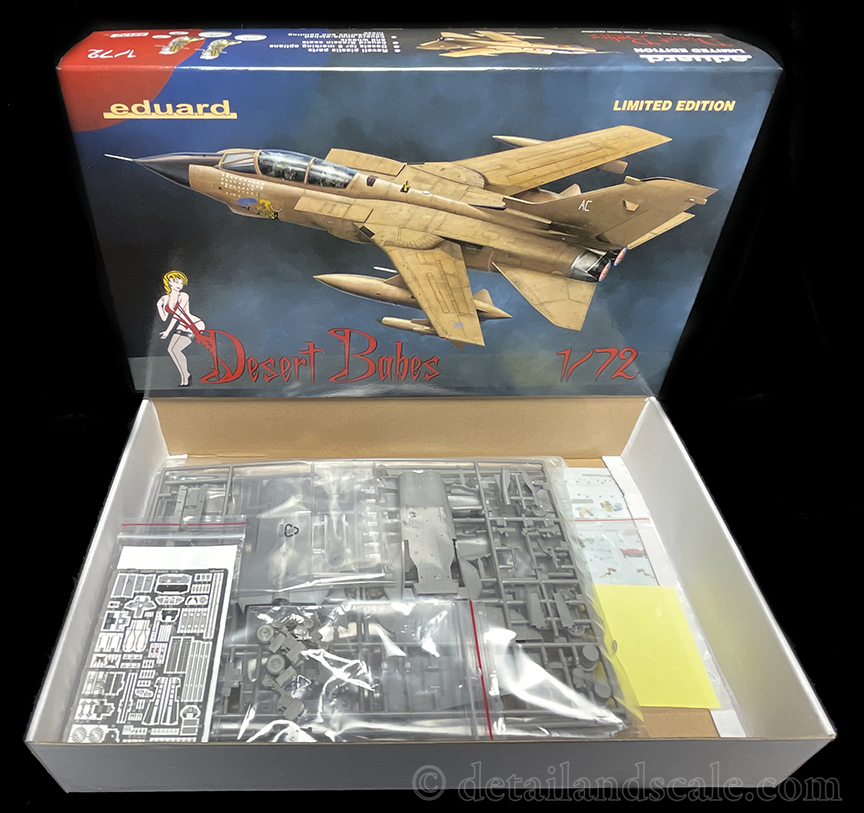 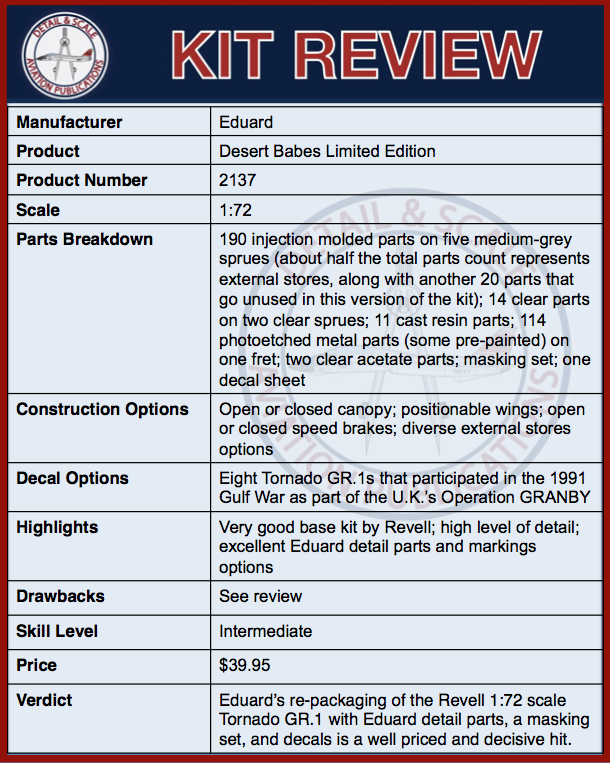 The 1991 Gulf War witnessed how an overwhelming application of airpower was the key to weaken and defeat Iraqi forces in the effort to liberate Kuwait.  Aircraft from Great Britain comprised one of the cornerstones of the multi-national Allied collation.  The RAF’s Tornado GR.1s found themselves tasked with some of the most dangerous ground attack missions of the war.  Here, we review Eduard’s recent Limited Edition kit, Desert Babes.  It repackages the Revell Tornado kit, adds Eduard detail parts, and provides markings for ten Gulf War Tornado schemes.

In the late 1960s, the United Kingdom urgently needed a replacement for the Avro Vulcan and Blackburn Buccaneer strike aircraft, but they had cancelled the TSR-2 and F-111K programs.  Simultaneously, West Germany and Italy needed a replacement for their F-104 Starfighter air defense platform.  Britain and France initiated the AFVG (Anglo French Variable Geometry) program, and despite France’s eventual withdrawal, work continued and became the Panavia consortium.  The final design was a two-seat, twin engine, variable-geometry fighter-bomber.  The first Panavia Tornado flew in August 1974 and achieved operational status in 1979.  Nearly 1,000 Tornados were built for the RAF, German Air Force and Navy, the Italian Air Force, and the Royal Saudi Air Force.

When Iraq invaded Kuwait in August of 1990, the U.K. very quickly deployed Tornado interceptors to the Gulf, while ground-attack GR.1s followed a few weeks later.  The U.K.’s contribution to Operation DESERT STORM was code-named Operation GRANBY.  On the first few nights of the war, RAF Tornado GR.1s were tasked with low-level strikes against heavily defended Iraqi airbases, coming in at high speeds and maintaining altitudes of around 200 feet to evade radar.  Still, Iraqi air defenses put up significant resistance and Tornado losses began to mount. A week into the war, Tornado GR.1 tactics and targets shifted to medium altitude attacks on bridges and oil refineries with the aim to degrade Iraqi forces in Kuwait.  Of the 55 Coalition aircraft lost during the first Gulf War, eight were Tornado GR.1s.  The lessons learned in Operation GRANBY, and in the post-Cold War world that followed, helped shape a renaissance in RAF tactics and philosophy – as well as a greater emphasis on precision strike – and helped bring about the significantly upgraded Tornado GR.4 in the years that followed.

Eduard’s Desert Babes Limited Edition kit contains the Revell kit which consists of 190 injection molded parts on five medium-grey sprues (about half the total parts count represents external stores, along with another 20 parts that go unused in this version of the kit), 14 clear parts on two clear sprues, 11 cast resin parts, approximately 114 photoetched metal parts (some pre-painted) on one fret, two clear acetate parts, and a small pre-cut masking set for the windscreen, canopy, and wheel hubs.  The decal sheet provides markings for eight aircraft:

Strengths:  Eduard often makes very good decisions when they choose to repackage someone else’s kit with their detail parts and decals.  Desert Babes is no exception.  Revell’s 1:72 scale Tornado might be 20 years old, but I still would rate this kit as the best 1:72 scale Tornado that is available today.  It is indeed superior in many ways to the Hasegawa Tornado.  Their parts breakdowns are similar, but the level of detail in the Revell kit is greater.  Further, the kit is a straightforward build.

The kit itself features excellent recessed panel, fastener, and rivet details.  The cockpit features an impressive range of details on the instrument panels, side consoles, throttles, and other details.  Ejection seats are generally good and include nice backpad and seat cushion details (though see below).  The landing gear details include plumbing and brake lines. The wings interlock and can be swung fore and aft.  The canopy can be positioned opened or closed, and speed brakes can be positioned retracted or deployed.  The separate horizontal stabilizers can be positioned as desired.  The in-flight refueling probe can be built extended or retracted.  External stores include 1,500 and 2,250-liter drop tanks, laser guided bombs, unguided 1,000-pound bombs, a Skyshadow ECM pod, AIM-9M/Ls, and more.

The irresistible elements of this kit for many scale modelers will be the parts and decals that Eduard added in this boxing.  While the kit cockpit details are fine for plastic and hold their own against many other kits, the detail in the resin and PE parts just cannot be beat.  In particular, the cast resin Brassin ejection seats are exquisite, and the details on the tires and wheel hubs are excellent.  The color PE parts for the instrument panels and side consoles will very significantly elevate the level of cockpit detail. These parts look absolutely great.  Other key detail parts include ejection seat shoulder harnesses and lap belts, rudder pedals, ejection seat handles, the HUD projector and frame, cockpit sills, and afterburner flame holders.  PE details also cover additional airframe details (e.g., antennas), nose gear items, external weapons pylons, and drop tank details.  Also note that if PE metal details are not one’s preferred medium, alternate cockpit instrument panel and side console decals are provided.  Furthermore, the masking set will save a great deal of time and effort.  I love using Eduard masks: they are easy to use, precise, and produce excellent results.

The markings options in this kit are the proverbial icing on the cake.  The Operation GRANBY GR.1s were not just notable for their temporary (and often heavily weathered) desert camouflage paint scheme, but for the pin-up style nose art that many of those jets carried on the left side of the forward fuselage.  The decals have been printed in-house by Eduard and appear to be standard water slide decals (as opposed to wet transfer decals).  Colors look great, everything is in register, and carrier film appears to be relatively thin.  It might be hard to choose which scheme to build, but at least for your reviewer, the shark-mouth schemes of “Foxy Killer” and Gulf Killer” are the most distinctive.  Further, take a moment to read the histories of each aircraft as they are described in the markings guide.  The stories of each of these GR.1s are detailed, and they reflect the depth to which Eduard’s research team went in their development of these decals.  For further reference materials on these specific aircraft, check out  https://dstorm.eu/pages/en/gb/tornado.html developed by Czech scale modeler Jakub Cikhart.

Weaknesses:  Just a few things to note: the molds are getting a little old, and there can occasionally be some flash here and there.  The air intakes lack any trunking and open up into the inside of the kit’s fuselage.  The shape of the AIM-9M/L nose sections seems a little odd.  Also, add about 10 grams of nose weight so this won’t be a tail-sitter.

Once again, Eduard provides another consistently great limited edition offering.  This time, it is a combination of Revell’s 1:72 scale Tornado GR.1 with Eduard detail parts, a masking set, and excellent markings options.  Modern jet builders, RAF scale modelers, fans of Operation DESERT STORM subject matter, and many others will really enjoy this kit.  As a limited edition kit, get it while you can.

Sincere thanks is extended to everyone at Eduard for the review sample.  You can visit them on the web at http://www.eduard.com and on Facebook at https://www.facebook.com/EduardCompany.