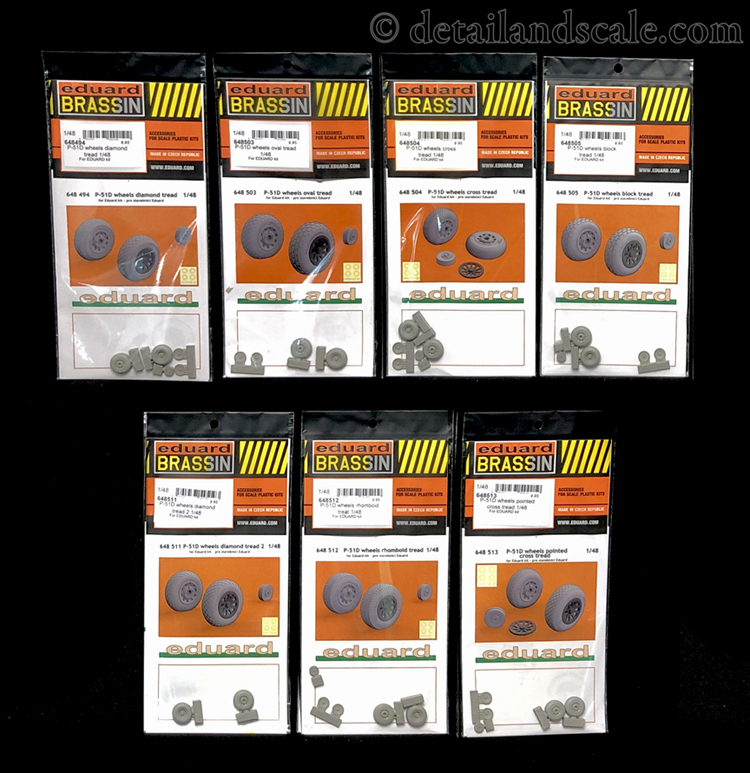 The cockpit of a model aircraft is often considered to be a key “focal point” for both builders and viewers.  Other important details sometimes get seriously neglected or come in as an afterthought, such as the wheels and tires.  This neglect sometimes comes on behalf of the manufacturer with under-detailed wheels, and some of it comes from the limitations of injection-molding.  Eduard’s 1:48 scale P-51D Mustang has decent wheels for an injection-molded kit, and even feature a basic tire tread.  Yet, they are split into inner and out halves, and some seam work and clean-up will be needed.

To improve wheels, Eduard has released a series of cast resin wheel sets for their P-51D kits.  The P-51 saw a lot of tires, each one featuring a different tire tread.  Here, let’s take a look at seven of these sets:

The casting is superlative, and the detail featured in these sets will make your wheels another “focal point” of your P-51D build.  In each case, the fidelity of detail of the tread patterns is pretty breathtaking (yes, it is good enough to get your reviewer clearly excited about tires).  Inner and outer hubs look great, along with the brakes and even the tire stems are represented.  The manufacturers’ imprimatur, from Goodyear to B.F. Goodrich, are also represented (though they are pretty fine raised detail, some delicate drybrushing should be able to pick them out).

Do note that you’ll have to clear the resin flash between the outer wheel hub spokes.  The casting block/pour points are located on the bottom of the tire, so the cleaned-up surfaces will be mostly out of sight.  The tires are slightly flattened and bulged on the bottom, but it is pretty subtle and not at all exaggerated or overdone.

For whatever style tire tread your 1:48 scale Eduard P-51D requires, these Brassin sets have you covered.  They might be “just” tires, but they can add some really nice and accurate touches to your Mustang.