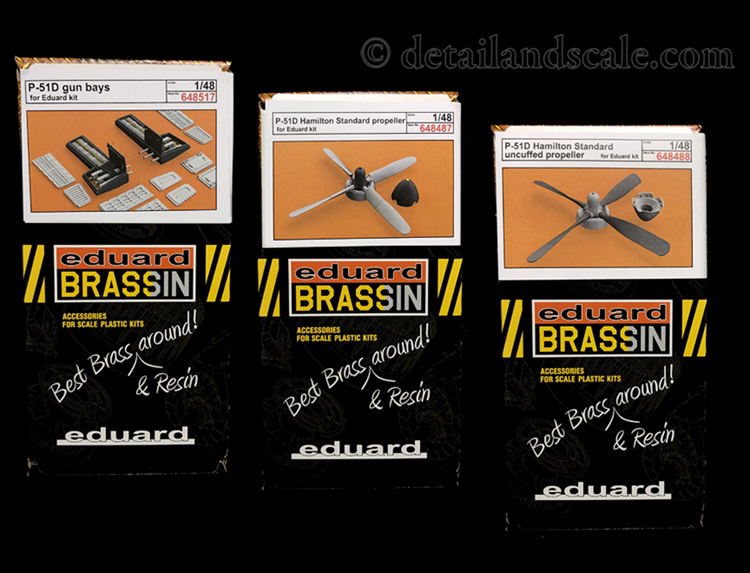 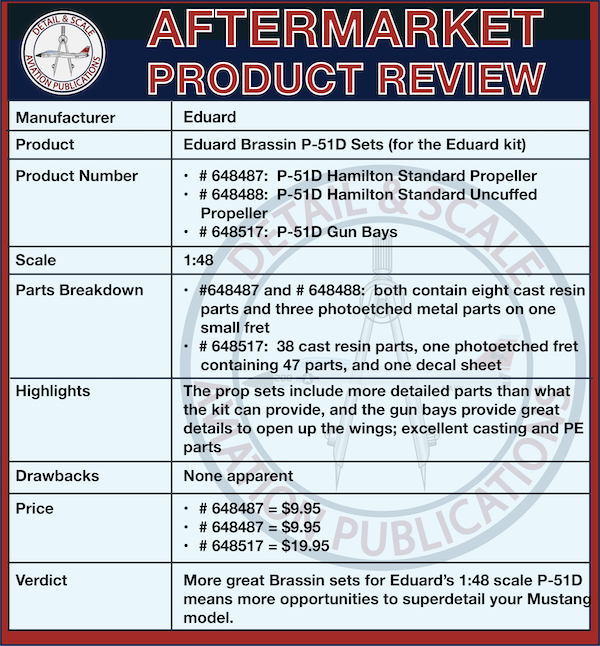 Eduard’s 1:48 scale P-51D Mustang has become a very popular kit, and Eduard has released a large (and growing) number of aftermarket detail sets (you can find many of them, along with reviews of other aftermarket sets, HERE).  In this review, we take a look at three Brassin sets for the Eduard 1:48 scale P-51D.

First, Brassin # 648487 has a replacement prop for the kit.  There are eight cast resin parts and three photoetched metal parts on one small fret.  Here, you get the separate components of the prop and associated assemblies, from the individual propeller blades, propeller hub, spinner base, and the aerodynamic spinner itself.  The insides of the spinner base and spinner are also rich in detail (a lot more than the kit itself), and this opens up opportunities for a detailed and disassembled engine.  A very handy propeller alignment jig is also provided to ensure precise assembly of the blades.  The photoetched metal fret provides the tiny part for the endcap at the tip of the spinner. You only need one, but the fret includes two spares if they are needed.

Second, Brassin # 648488 is nearly identical to # 648487, except this set comes with the uncuffed Hamilton Standard prop with the wider, blunted tips.  These were seen in many later P-51Ds and F-51Ds.  Check your references to see which set of props are appropriate for your particular project.

Third, Brassin # 648517 provides a set of gun bays for the Mustang.  It contains 38 cast resin parts, one photoetched fret containing 47 parts, and one small decal sheet.  This set requires the builder to cut out the gun bay access panels to fit it.  Fortunately, Eduard has a nicely recessed surface on the inside of their upper wing halves that act as a cutting guide (thanks for that!).

Once the wings are opened up, it’s time to get to work.  The set provides two complete gun bays, six .50 caliber machine guns, early and late styles of gun bay access panels, and ammo belts.  The small decal sheet provides the large data placards for the inside of the inboard ammo bay access door.

The detail in this set is excellent.  The combination of the resin and photoetched metal parts that build up into the ammo bay are really great.  Similarly, detail on the doors is awesome, and you even get open door latches as very small PE parts.  Normally, I prefer doing ammo belts as photoetched metal, but these resin cast rounds are really nicely executed – and not flat like a PE part.  There are also two different styles of belts – relatively flat belts and belts that are undulating.  Mix and match them and none of your ammo belts will be the same.  The loading and maintenance placards on the inside of the inboard gun bay doors are really nicely printed decals.